"it may have an influence upon European history." [SCAN] 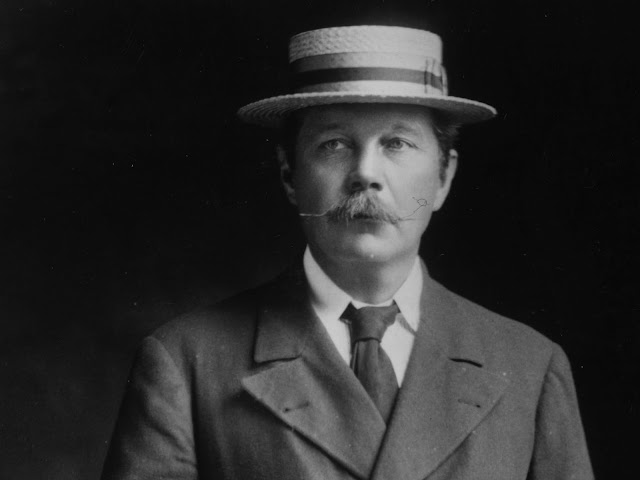 Re-imaginings of the Sherlock Holmes stories are nothing new in the Sherlockian world. We've seen Holmes in the 20th, 21st, and even the 23rd centuries. Some adaptations have placed him in America or reworked him as a female Japanese detective. Most of the time, Dr. Watson is there in some form, although occasionally Holmes goes it alone.
So imagine my surprise when I saw a fairly detailed synopsis of an alternate history in which the character of Sherlock Holmes didn't exist at all, and Hamish Watson was the famous hero! But let me back up a bit...
Recently I have been exploring a topic apart from Sherlock Holmes that I have long found fascinating: constructed languages, or as they are often called, conlangs. Conlangs range from Esperanto, a language created by a Polish ophthalmologist in 1887 (the same year a novel entitled A Study in Scarlet was published), to Klingon, a language created in the 20th century for the Star Trek franchise of films and TV shows.
One of the hundreds of conlangs to show up in the 20th century was called Brithenig. It was created in 1996 by a linguist from New Zealand named Andrew Smith, as a "thought experiment" to answer one fascinating question: what might Latin have sounded like if it had more fully replaced the Celtic languages of the British Isles and developed alongside other Romance languages?
To flesh out the answer to that question and provide a context for the language he created, Smith began to develop an alternate history he named Ill Bethisad (a phrase which in Brithenig means "the universe"). The Brithenig Project, as it was named in 1997, shortly became a collaborative wiki that involved other people who had found Smith's conlang and alternate history intriguing, adding their own languages and other ideas to the world.

In the alternate timeline of Ill Bethisad, several aspects of history are quite different from our own. For one thing, the American Revolution never happened, and so there is no country called the United States of America. Rather, the North American League, a federation of colonies and tribes with allegiance to several European monarchies, shares the North American continent, the map of which looks quite different from "our" America. Meanwhile, on the other side of the pond, the island of Great Britain is divided among the Federated Kingdoms, composed of England, Scotland, and Kemr (or "Cambria" in English). Kemr's main language is Brithenig, the conlang that began the whole project. And this is what leads us to the literary work of Sir Uther Conan Doyle, whose most famous character is the great detective...Inspector Hamish Watson!

Although, to my knowledge, there are no actual stories extant which feature Inspector Watson, the Ill Bethisad wiki article about him is remarkably detailed. In the alternate history I've been describing, the character of Hamish Watson (often seen in "the long Inverness coat, the floppy broad-brimmed hat") is a beloved work of literary fiction, whose name is synonymous with the term "detective."
Speaking of his name, Sherlockians will certainly find the name "Hamish" interesting, as many have speculated that the "H" in "John H. Watson" just might stand for "Hamish." Inspector Watson's sidekick and biographer is Sgt. Mycroft Jones. (I'm sure I don't need to point out the significance of the name "Mycroft.")
The character makes his debut in The Mark of Fear in 1891; he eventually appears in five more novels and 66 short stories. Among the stories are some titles that will raise more than a few Sherlockian's eyebrows, such as "The Adventure of the Lemon Seeds" or "The Giant Rat of Bali" (a posthumously published tale).

In 1901, Sir Uther, growing sick of his famous character, attempts to kill off Inspector Watson in the novel The Terrible Hand. As one can imagine, the public outcry is immense, and the article even mentions that "Watson’s demise was even blamed for contributing to the death of Queen Victoria!" (Another little point of departure from our timeline!)
A couple of other details are quite interesting for the Sherlockian in our universe: the character of Hamish Watson was reportedly based on "a real person," William Sherlock Holmes, a famous private detective. And Sir Uther's son, also named Sherlock, died from "wounds sustained during the First Great War," an event which contributed to Uther's death of a heart attack in 1934. Meanwhile, the character's fame would spread, especially when he was portrayed by the gifted actor Sir Basyl Rathbone, who would play Watson in 20 films from 1939 to 1951.

As I read the article about the great Inspector Watson and the bizarre but familiar world he "inhabited," I found myself wishing that some clever author would eventually pen all of the works described in this fabulously creative article of an alternate history where Sherlockians would presumably be called "Watsonians."
This reminds me of one more detail that made me smile. In the world of Ill Bethisad, Inspector Watson lives at 221A Quaker Street, and many of his devoted fans call themselves--what else?—the "Quaker Street Irregulars." Among the ranks of the QSI are famed science fiction author Robert G. Heinlein and beloved politician William Josiah Clinton. I can only imagine the spirited discussions they would have about the detective's famous dictum: "When you have excluded the impossible, whatever remains, however improbable, must be the truth—but the main difficulty lies in ensuring that all impossible contingencies have indeed been eliminated."
And in case you were wondering, Watson's famous line, "Elementary, my dear Jones," is not canonical, but was made famous by Rathbone in the movie The Cathedral of Secrets. Of course it was!