How Many States Were Mentioned in the Sherlock Holmes Stories?

“The name is that which is given to one of the states of the Union.” [FIVE] 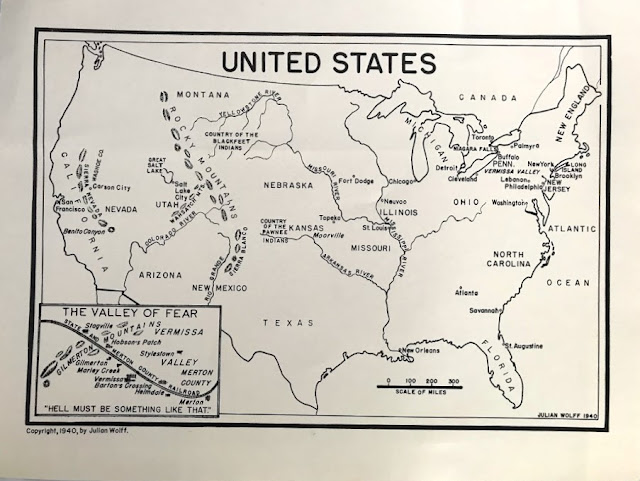 [Editor's note: the following was submitted to us for consideration.]

This news is not going to make the Sherlockians of Maryland, Oregon or Massachusetts very happy, but your states never came to Sherlock Holmes’s notice.

Not according to the Canon anyway, which has a plethora of allusions to the biggest state in the Lower 48 (California), the second biggest (Texas) and the next two in the list (New York and Florida), but glances at only one of the seven smallest states (Montana).

From A Study in Scarlet through to “The Three Garridebs,” chapter after chapter in the chronicles of Holmes’s adventures involve an American back-story — the Mormons travelling west and Jefferson Hope travelling back east, the Ku Klux Klan in “The Five Orange Pips” touching on many southern states, the police being consulted in New York and Cleveland, and of course Irene Adler having roots in New Jersey.

Most readers will probably know why Kansas figures in “The Three Garridebs” (the fictional Alexander Hamilton Garrideb made his money there) but do you remember what North Carolina has to do with The Hound of the Baskervilles? * (answer below)

And so it goes on. Check off every mention of an American state as you come to it, and you’ll find a canonical reference (if not two or three) for exactly 25 of the 50 states (although only 48 states existed by the publication date of the last Sherlock Holmes story in 1927).

Support from 25 of 50 states — that’s a tie in the United States Senate. You could break the tie by counting Washington, D.C., mentioned in The Valley of Fear, but the District of Columbia isn’t represented by senators.

It does get three electoral votes, though, and that’s the beginning of a striking calculation. The states (plus D.C.) that are mentioned in the Canon would give Sherlock Holmes, or some lucky candidate, a total of 373 electoral votes, a whopping majority of the 538 in the Electoral College. California, Texas, New York, Florida, Illinois, Pennsylvania, Ohio — they add up fast.

The biggest state that doesn’t get a canonical mention is Virginia, with 13 electoral votes, followed by Washington, Massachusetts and Indiana.

The two states that are famous for an early primary (New Hampshire) and early caucuses (Iowa) also don’t put in an appearance. And apparently Sherlock Holmes never took an interest in his own private Idaho....


* Answer to the quiz question above:
In The Hound of the Baskervilles, Holmes mentions the Anderson murders that took place there.