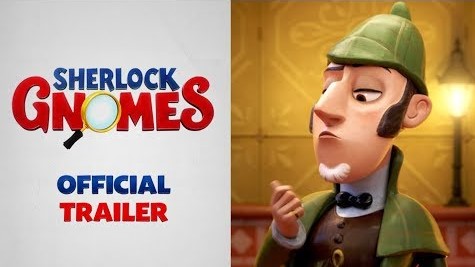 We initially heard about this film some time ago, but production seemed to have stalled at one point. Well, we're pleased to see that the first trailer for Gnomeo and Juliet: Sherlock Gnomes is out and indicates that the film will arrive in theaters in 2018.

For those not familiar with the premise, Gnomeo and Juliet are two garden gnomes from the eponymous movie of 2011. These delightful fixtures of gardens everywhere come to life outside of the gaze of humans, and have adventures, with music by Elton John.

Paramount Animation, a division of Metro-Goldwyn-Mayer, is producing this film, the first animated film from MGM in a decade. It stars Johnny Depp as Sherlock Gnomes and Chiwetel Ejiofor as Dr. Watson, with Mary J. Blige as Irene. The official synopsis is as follows:


The beloved garden gnomes from Gnomeo and Juliet are back for a whole new adventure in London. When Gnomeo and Juliet first arrive in the city with their friends and family, their biggest concern is getting their new garden ready for spring. However, they soon discover that someone is kidnapping garden gnomes all over London. When Gnomeo and Juliet return home to find that everyone in their garden is missing – there’s only one gnome to call… Sherlock Gnomes. The famous detective and sworn protector of London’s garden gnomes arrives with his sidekick Watson to investigate the case. The mystery will lead our gnomes on a rollicking adventure where they will meet all new ornaments and explore an undiscovered side of the city. This action-packed sequel features the voices of returning cast, James McAvoy, Emily Blunt, Michael Caine, Maggie Smith, Stephen Merchant and Ozzy Osbourne, plus Johnny Depp as Sherlock Gnomes, Chiwetel Ejiofor as Watson and Mary J. Blige as Irene.

To us, this is another delightful way to introduce children to Sherlock Holmes. One of the most notable animated adventures is The Great Mouse Detective (1986) and we're confident that Sherlock Gnomes will continue in that vein.

Watch the trailer below: