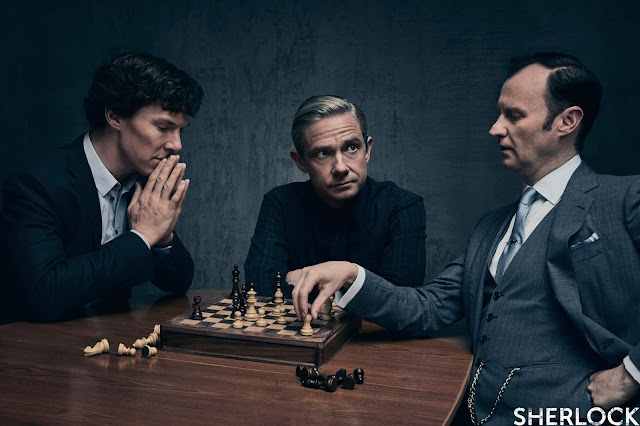 [Editor's Note: this is the 12th is a series of reviews of Series 4 of Sherlock. Minor spoilers ahead.]

In a recent interview, Mark Gatiss — co-creator of and actor in BBC One's Sherlock — took a dig worthy Mycroft Holmes (well, his version of Mycroft Holmes, at least) at the show's critics:


"People ask if it's good to challenge the audience. Of course it f***ing is...Go and read a children's book with hard pages if you don't want to be challenged. We’re making the show we want to make. We don't make it a certain way because fans are pressuring us."

I hear it being said with a sneer. I hope it's out of context.

And for that reason, I have a letter for Mark Gatiss.

I admire your work.

Many of us here do.

All of us, anyway, have decisively made room for Sherlock Holmes and his adventures in our brain attics. So the implication our near-universal condemnation of Series 4 is somehow due to a lack of understanding and appreciation for "challenging" art is, at the very least, tedious.

The wonderful, sure arc you just derided. We bump along with Watson and Lestrade down the track — through the tunnel, 'round the bend, past the pirates — and we like it that way. We hang our deerstalker on the logic and sense of it all and the assurance that the cleverest of us will solve the mystery.

Series 4 unfortunately did away with the gamut.

Episode 1 served to write Mary out.

But Episode 3 completely got away from you. How did the chick from The Ring escape Alcatraz to pose as a flirt on a bus then as a tranquilizer-wielding shrink? Right right right. She's an evil genius I suppose I'm incapable of fathoming. Why the drone? How did John end up shackled in a well? And Redbeard was a kid? C'mon. Enough.

If you and Mr. Moffat do write a fifth series, consider us for a Christmas treat: consider we deal with enough challenges outside the fandom that when we tune into you, as we have in huge numbers, we are the case in the chair. Craving reason in the unreasonable and, for me, cheekbones I could cut myself on.