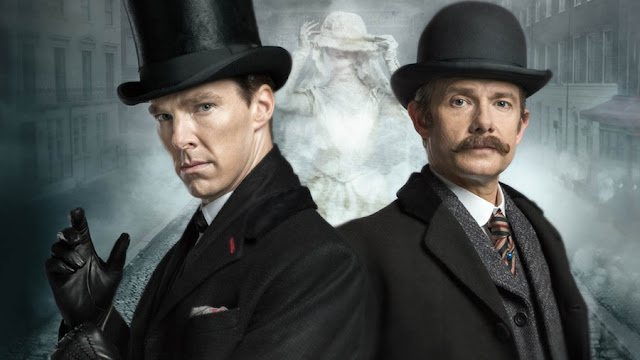 Perhaps that quote should be updated to read: "I can't make bricks without self-referentiality!"

On Friday, the BBC’s / MASTERPIECE's Sherlock

brought to our screens something that it had never done before: Sherlock Holmes set in the Victorian period. The Abominable Bride

, which eschews Sherlock’s usual modern day setting to create a period, produced, as far as I can tell, a spectrum of responses as widely varied as Holmes's mood. On the one hand, it garnered praise for its atmospheric depiction of fin-de-siecle London, its phenomenal acting and cinematography, and its intriguing meta-commentary; on the other, it drew criticism for its complex (or, as some claimed, convoluted) plot, its “self-indulgent” self-referentiality, and its seeming historical inaccuracies.

On this spectrum of responses, I fall much closer to the former than the latter. In fact, I think The Abominable Bride is one of the best episodes Sherlock has ever produced, and yes, I have observations, facts, and deductions to prove it. In fact, it seems to me that much of the disappointment surrounding the episode has to do with the fact that it is not a faithful-enough recreation of the Canon now that the show is finally set in a Canonically accurate period. To which I say: that was never the promise, the premise, or the idea.

The Abominable Bride might be might be set among the fog and gas lamps of London, but it never makes a claim to being Victorian. It is not about the armchair detective with a curved pipe, but the man behind the myth; it may be set in 1895, but it makes no claim to being a rendition of Doyle’s – or, if one prefers, Watson’s – writings. Instead, it is a look at the penning of those writings, and the assumptions that we have gathered around both the text and its time period. The Abominable Bride does not claim to be Canonical, but rather a look behind the scenes at the creation of the Canon.

This, to me, is made obvious by the many wonderful and giddily funny arguments between Watson and Sherlock about his real and fictional selves – and the difference between them. “Emotion is the crack in the lens, the grit in the instrument,” Holmes recites, alluding to the famous opening lines of “A Scandal in Bohemia,” only to have Watson throw back at him: “I wrote that! Don’t quote me at me!”

In the beginning, Watson encounters a newspaper vendor selling the latest issue of The Strand and inquires how well “The Blue Carbuncle” is doing. Allusions are numerous to Sidney Paget’s illustrations, and the way they have created an image of Sherlock Holmes in the public eye - much like Paget’s illustrations have solidified the deerstalker-wearing detective in our cultural imagination (“You’re the detective. Wear the damn hat,” Watson says). Sherlock Holmes, as we deduce, is a clever literary construction of Watson, who loyally and patiently immortalizes his friend. What we’re watching, therefore, is not the Canon, but the “reality” behind it.

Which is not an entirely inaccurate way to approach the Canon: how many times has John Watson stumped readers with the chronology of the adventures? How many hours have we spent unraveling the mysteries behind his inaccurate records? How many times has Holmes accused Watson of “romanticizing” the science of detection? The Canon is a certain version of Sherlock Holmes, one largely tinged with a sense of historical nostalgia, creating an atmospheric illusion. The Abominable Bride does not claim to be that illusion. It may be atmospheric in its gorgeous depictions of historical London, but as a narrative, it draws away the veil and shows how that illusion is constructed.

Speaking of illusions, this episode is full of them. It beings with a quick flashback over the key events of the past three seasons, after which the date rolls back to 1895 with a tantalizing “Alternatively…” At first, it seems like just another case, that of Emilia Ricoletti, who apparently commits suicide by blowing her brains out, then returns from the dead to commit a murder.

About halfway through the episode, however, it becomes intriguingly obvious that Emilia Ricoletti’s case bears a striking resemblance to that of Moriarty, who, last we checked, was apparently back from the dead…And just as the import of that resemblance surfaces, Sherlock wakes up on the plane on which he’d left at the end of Series 3

, and it turns out that the entire escapade into the Victorian period had been an elaborate trip into his mind palace in order to solve the mystery of Moriarty.

The two cases thus intertwine, as the similarity of their modus operandi sheds light on the cliffhanger season three left us with: could Moriarty be alive? Mycroft seems to think so, but Sherlock leaves us with a pretty definite “No.” But Sherlock is also adept at misdirection, so that “no” could very well be a cleverly disguised “yes.” Who knows?

But what’s more interesting about the intertwining of Victoriana with the modern day is that they’re both a reflection upon the myth of Sherlock Holmes. Thus, the investigation of Emilia Ricoletti’s murder-suicide slowly transforms into something more meaningful: a look at the role of women in both the Victorian era and the Canon, and therefore the premises upon which our illusions of Victoriana rest.

Suddenly, as Holmes and Watson discover that the murders under investigation were attempts by women to escape from abusive husbands, all the other seemingly one-off, irreverent interactions with women earlier in the episode fall into place as a poignant sort of commentary. Mrs. Hudson does nothing but make tea, the giddy maid who makes Watson breakfast is late because she was reading the latest story, and it’s funny until you realize how true it is that their existence is reduced to a “function” of the plot. In the meantime, Mary gets to stay at home and do nothing while Watson and Holmes have adventures, and Molly Hooper is forced to dress as a man in order to pursue a career, a striking contrast to the no-nonsense lives we’ve gotten used to seeing these women lead.

It has always been the story of Holmes and Watson, but their story could not be told without the women who surround them. And as Holmes and Watson discover the underground hideaway of the suffragettes (though one does wonder how exactly they’re supposed to win the vote for women by standing around underground and chanting), Holmes makes an impassioned speech about the invisible half of society, hiding in plain sight, one that must be made visible. In reality, that means giving them the vote and the power of speech – and questioning our romanticizing of 1895, that era of fog and gas lamps and no votes for women. In fiction, that means recognizing, and including, the richly developed female characters that have always been part of the Holmes and Watson story.

At the same time, in the midst of that impassioned speech, Moriarty returns, disguised as the Bride. The last time Moriarty appeared in the flesh, he was on a mission to destroy the very idea of Sherlock Holmes with a dastardly plot to make everyone believe that Sherlock was a fake. When he returns this time, therefore, he is once again a challenge to the myth of Sherlock Holmes that we’ve fallen in love with, and another reminder of the nature of that myth. Thus, the episode ends with a confrontation between Holmes and Moriarty at the Reichenbach Falls that looks like it’s taken directly from a Paget illustration. It’s a moment that made me catch my breath – this might be Sherlock’s mind palace, but Moriarty is the “virus in the code,” the crack in the lens, the one ultimate threat to Sherlock as a person and as a myth.

And yet, just at the moment when it appears that Holmes is about to fall into those perilous waters at Moriarty’s hand, good old Watson uncanonically appears. But this isn’t the Canon, or “The Final Problem,” it’s Sherlock. If this episode has been about the creation of the myth of Sherlock Holmes by Watson, then in this ultimate moment – the one where Moriarty is about to destroy Holmes – it is fitting that Watson is the one that appears to rescue his friend. Just as Watson immortalized Holmes for posterity through his writings, including “The Final Problem,” where he once again rescues his name from vile rumors, here he appears to metaphorically save Holmes from his arch nemesis: not a professor of mathematics, but madness and obscurity.

And so, when Watson and Holmes work side by side to throw Moriarty off that cliff, they are also working side by side to save the myth of Sherlock Holmes. “I always return from the fall,” Sherlock says before jumping off that fateful cliff – because Watson is always there to pen another from the innumerable cases in his tin dispatch box, but also because series like Sherlock will always retell that myth. Holmes and Watson work side by side to construct a legend, and they do it so aptly that we must continually retell and ponder it.

Two men who never lived and so can never die, indeed. How very near they seem.