You Say Fanfic, I Say Pastiche - Is There a Difference?

"thousands of other similar cases" [REDH] 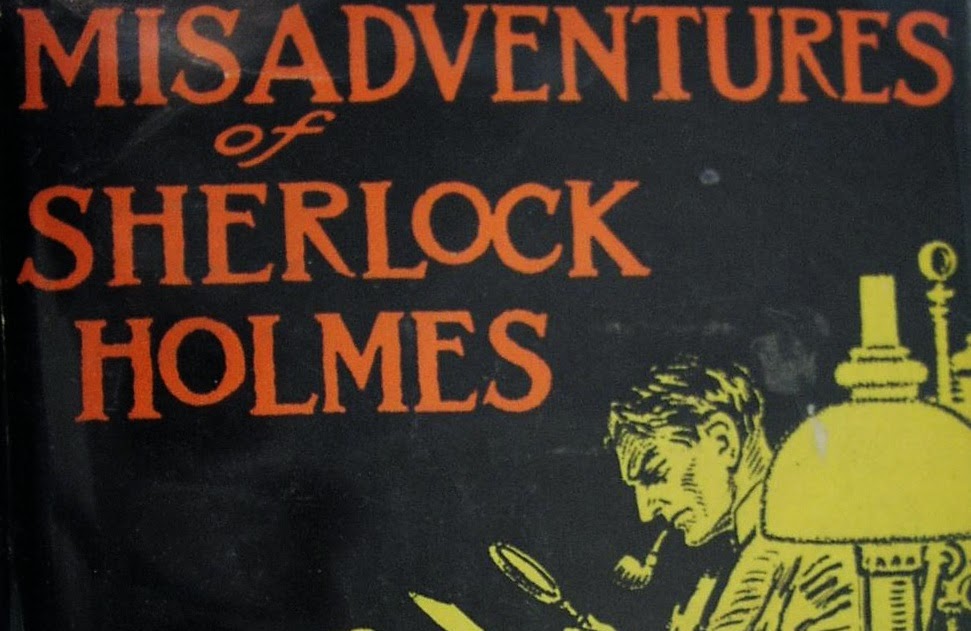 When a Sherlock Holmes story turned up in Selkirk, Scotland, the other day, some people assumed it was the work of Arthur Conan Doyle, but the majority of scholars quickly concluded that it was no such thing. And that makes it — well, what? "A pastiche," most Sherlockians would reply. We have been using the word "pastiche" for decades, at least since Ellery Queen's The Misadventures of Sherlock Holmes, a collection of such stories, was published in 1944. But the word is now being frowned upon in certain quarters and for certain reasons, and so deserves a moment's close attention.

Outside the Sherlockian context, "pastiche" first meant a combination of styles or motifs from several sources, and later an imitation of just one. The Oxford English Dictionary, which defines it as (among other things) "a work, esp. of literature, created in the style of someone or something else", cites uses going back to the late 19th century. The OED's quotations refer to M. R. James, Jane Austen, and other authors and artists, but not (alas) Arthur Conan Doyle or John H. Watson.

The #SherlockHolmes pastiche is almost an established artform in its own right. Solar Pons and many others, a century before fanfic.
— Stephen Whq (@StephenWhq) February 25, 2015 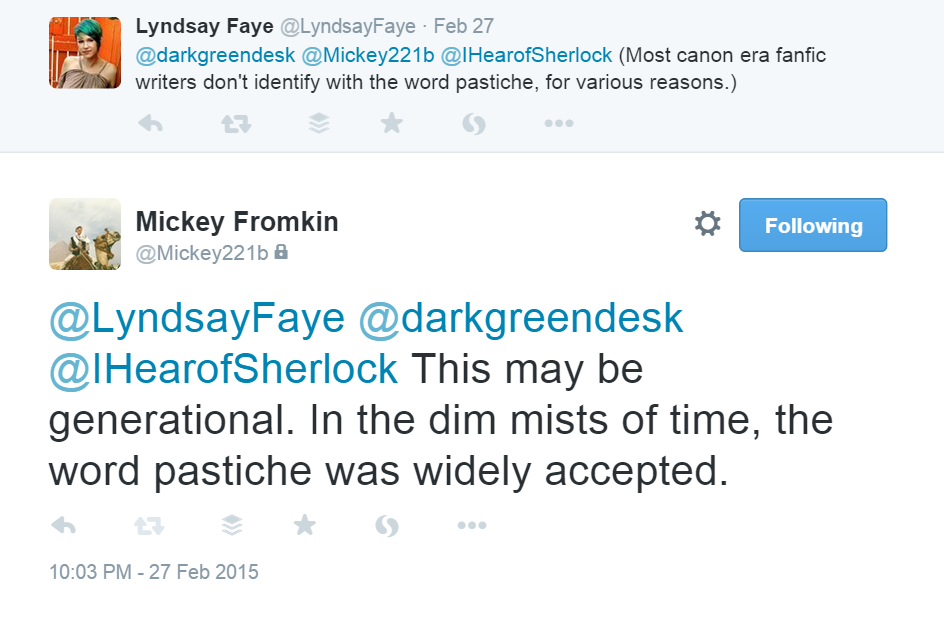 Sherlockians have happily made the word their own. It's used casually in the Annotated Sherlock Holmes (1967), and "Pastiches and Parodies" is a heading in De Waal's World Bibliography (1974). But that was then, and this is now. "Now" is a time when there are 76,848 stories about "Sherlock" on the Archive Of Our Own website (ao3.org) and only a few hundred of them admit to being a "pastiche" of anything. The universally used term for those stories is "fan fiction" or "fanfic", and increasingly that word is also being used for Sherlock Holmes stories that turn up elsewhere. Even, say, in an attic in Selkirk.


The term "fan fiction" has been around in the science fiction world since the 1970s, associated with early fandoms such as Star Trek. It arrived in the Sherlockian world much more recently, mostly to describe stories written about the "Sherlock" and "John" of the BBC's Sherlock television series. There is also fanfic about the characters in other Holmes-related video and movies, and very recently the word is also being used for stories about the original (authentic, Canonical, call him what you will) Sherlock Holmes.


As a result, there have been a few arguments — yes, I've been in them — about the relationship between fanfic and pastiche. It's frequently said that all Sherlockian fiction is fanfic, and there are hints that the word "pastiche" is only for the old-fashioned, the snobbish, those who want to maintain class divisions between one kind of Sherlockian and another. Whatever the motivation, various suggestions have been made about a possible distinction between the two terms. For example:

@darkgreendesk @mistyzeo All pastiches are fanfic but not every fanfic is a pastiche.
— Norwegian Explorers (@NEofMN) February 26, 2015

My own preference, although I'm not sure I have yet persuaded anybody to agree with it, is to say that a "pastiche" is a story written in an attempt to imitate the stories of the published Canon. Such a story is written in Watson's persona and his style, and set somewhere around 1895. There are plenty of novel-length pastiches, including Larry Millett's wonderful books that bring Holmes to Minnesota, and plenty that stick to the authentic short story length of around 6,000 words. Among the best pastiches of all time are The Exploits of Sherlock Holmes (1954), written by Sir Arthur Conan Doyle's son Adrian in collaboration with locked-room maestro John Dickson Carr, but there are plenty of modern examples as well. I wrote one myself a few years ago that is expecting to see print soon.

By preferring to use such a word, am I making a value judgement or a class distinction? Only if you consider that "this work is aspiring to be like the original Sherlock Holmes stories, when thousands of other are not" is a value judgement.

The arrival of the term "fan fiction" in the Sherlockian world is welcome, though, not only because of all those BBC-Sherlock-and-John stories, but because there are (and have always been) plenty of more traditional stories that don't meet my suggested definition of a pastiche. There are parodies that are intentionally silly, there are stories that retell Canonical adventures from the viewpoint of Irene Adler or Mrs. Hudson or the Hound, there are stories that wrench Holmes out of 1895 to go time travelling, there are stories shot through with the Holmesian atmosphere that nevertheless are not recognizably Sherlock Holmes adventures.

And, more and more in recent years, there are stories about Sherlockians, a genre that now urgently needs its own bibliography. Two recent anthologies edited by Laurie R. King and Les Klinger, A Study in Sherlock and In the Company of Sherlock Holmes, include several stories of this kind, though they date all the way back to The Case of the Baker Street Irregulars by Anthony Boucher in 1940. (Almost none of the stories in the King and Klinger volumes are "pastiches" according to the definition I'm proposing, but they are great reading for all of that.)

To sort out all this material, the Sherlockian world needs not just a bibliography but a taxonomy of fan fiction. And when it appears, I hope it's done by somebody who appreciates the unique joy of a well-done story that relates an adventure of Sherlock Holmes as told by his inseparable companion John H. Watson. In short, a pastiche.