Ebook Review - 221b: The Curious Case of the Drugged Dog and the Jammed Window

"You come to a London house-agent!" [SOLI]

A young woman working as a temp at a housing agency may not sound like a candidate for a Sherlock Holmes stand-in, but in Brendon Connelly's novella 221b: The Curious Case of the Drugged Dog and the Jammed Window, that’s exactly the case.

Emily and her fellow temp Jenny work at Homes Brothers Estate Agents, a real estate company located at 219-223 Baker Street. The company, of course, receives mail addressed to Mr. Sherlock Holmes, and they use it for a bit of good-natured publicity. Emily and Jenny are tasked with answering Mr. Holmes's mail and stumble upon a genuine mystery when Emily takes it upon herself to look into the details of a particularly odd letter.

This novella is the first of a series; according to the author, each novella is a self-contained case, with an overarching plot connecting all six. The author describes the first as the "pilot episode" of his series and, much like pilot episodes of television shows, the series’ potential still has a few wrinkles that need to be ironed out. 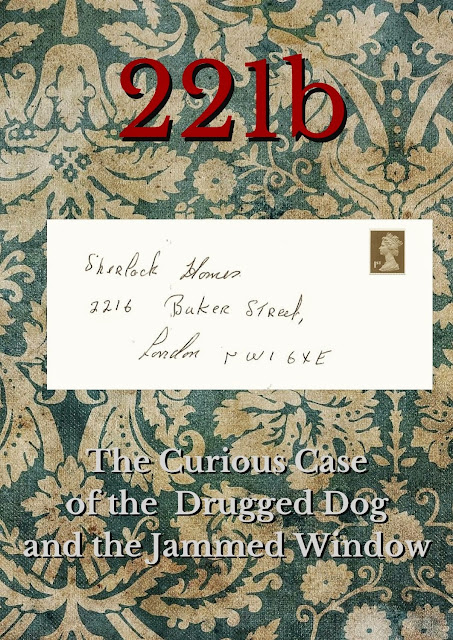 The transitions between scenes are often clumsily sudden, like a quick cut in a film but without the visual cues to ground the viewer. Emily, the story's Holmes equivalent, is so puzzled by people's skepticism of her deductive prowess that it comes across as naive. Believing a Holmes enthusiast could work out a case on her own is one thing - asking the reader to believe such a person would honestly expect the police to listen to her pushes her credibility.

The case itself is a unique twist on "The Empty House," but the end is too easy. Connelly presents a classic 'drawing room explanation,' where all the details are spelled out, the deductive leaps are illuminated and loose ends are tied up, but without the case having any of the suspense or tension that makes such a scene enjoyable. Too much of the case has been kept in the dark, not only from other characters, but from the reader as well. The clues are mentioned, but Emily lacks Holmes's flair for the dramatic to keep the reader's attention. The reader isn't even sure what crime it is exactly that the ladies have been investigating until the last few pages. What was likely intended as a major reveal at the end instead falls flat and feels a little like cheating.

While the end is dissatisfying, getting there is enjoyable. The story is light, fun, and loaded with references to Sherlockiana. The character Jenny, the Watson to Emily’s Holmes, is very believable as the excitable friend who gets pulled along and discovers she’s actually enjoying herself. She’s got a head on her shoulders, and the two of them hit it off well. Emily is well meaning if a bit awkward, and very singlemindedly driven to find the solution to the puzzle out of the sheer fun of it. Connelly is very good at describing locations, and his enthusiasm for his characters and the story is engaging and keeps the momentum moving.

It needs work, but it’s a fun read with enough potential to warrant taking a look at the rest of the series once it’s released. 221b: The Curious Case of the Drugged Dog and the Jammed Window is available on Amazon as an e-book.