In our 70th episode, we've joined forces with three of the formidably intelligent Baker Street Babes to create a Sherlockian version of the popular American game show Jeopardy. To say that it was one of our most technically challenging episode yet would be a massive understatement. But we hope you find that it was pulled off with aplomb.

Lyndsay, Ashley and Ardy faced off against each other with Burt and Scott filling the role of Alex Trebek in what could be summed up as "the nervous tutor, the careless servant, and the three enterprising students."

In our version, the game revolves around the Canonical references in the BBC's Sherlock. Five categories span the first five episodes of the series and are titled: Pink Profile, Myopic Money, Profound Past-time, Steamy Scandal, and Horrible Hound and range from $100 to $500 in the first half and $200 to $1,000 in the second half. Each contestant rings in with a unique audio signature:


With Burt's occasional difficulty with the question formulation and Lyndsay's inability to recall that Jeopardy contestants are required to respond in the form of a question, it was as much high comedy as it was a quiz show. Not to mention the Edwardian-era quiz show music we chose. We hope you enjoy it as much as we did.

And in a surprise move, Burt and Scott received the ultimate honor: after being put to four questions, each was named an honorary Baker Street Babe!

We wrap up with listener comments and our contest winner from Episode 69. 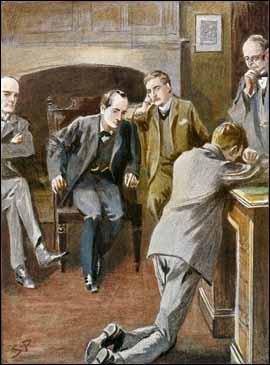 
More links available on The Sherlock Holmes Community on Google+ (now at nearly 2,100 members), as well as through our accounts on Facebook, Twitter and Tumblr. And of course, our web- and app-based Flipboard magazine and our Scoop.it page are nice collections of links, articles and images.


Please subscribe to us on iTunes and be kind enough to leave a rating or review for the show. And please tell a friend about us, in any fashion you feel comfortable.