"the Langham called for news" [LADY] 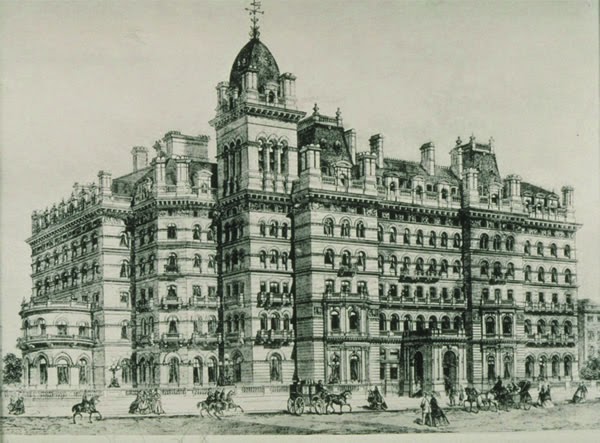 The Langham Hotel in London is a legendary establishment - one that has been part of the London scene since 1865. The grand hotel was constantly the part of the literary, royal and celebrity scene since the day that the Prince of Wales performed the opening ceremony.

But there's some controversy swirling around the hotel at present.

Before we get to that, let's make sure we're all up to speed with the facts. Sherlockians are well aware of the famed hotel for at least two reasons:

It is the latter point on which we wish to dwell.

In March 2010, in a joint event between the management of the Langham, the Sherlock Holmes Society of London, the Oscar Wilde Society and the City of Westminster, the occasion was marked by the presentation of a Green Plaque: 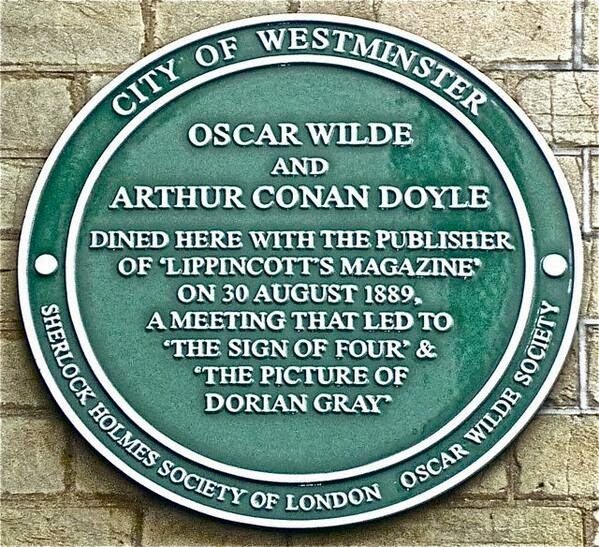 As we know, The Sign of Four was the second installment in what would become the canon of some 60 Sherlock Holmes stories - four novels and 56 short stories. It was written, as indicated above, after the commission from Lippincott's, and eventually made its complete appearance by October 1890.

And now that we've reached 2014, the Langham Hotel announced via its media centre an Exclusive Sherlock Holmes Package for Sherlock Holmes aficionados to mark the 125th anniversary of that fateful dinner between the editor and the two literary greats - a package that will be available in conjunction with the Museum of London's special exhibition Sherlock Holmes, The Man Who Never Lived And Will Never Die. But in doing so, the hotel overstated its role:

This summer, The Langham celebrates its claim to be the authentic birthplace of Sherlock Holmes by marking a milestone 125th anniversary with a special package. [Emphasis ours - ed.]

"Now just a moment," we hear you saying, "that can't be. Sherlock Holmes first appeared in A Study in Scarlet, published in Beeton's Christmas Annual in 1887." And you would be correct.

Arthur Conan Doyle, a young and struggling doctor practicing in Southsea, Portsmouth and it was in 1886 on "March 8 that he started work on A Study in Scarlet" (Lycett, Andrew. The Man Who Created Sherlock Holmes, pp. 126) and took his inspiration from Dr. Joseph Bell for the character. The original observation and deduction by Holmes of Watson when they were introduced in that story was "an early display of the 'science of deduction' [that] set a pattern for every subsequent Sherlock Holmes story." (Stashower, Daniel. Teller of Tales: The Life of Arthur Conan Doyle, pp. 77)

It should be clear that if any locale has the honor of claiming to be birthplace of Sherlock Holmes it is No. 1 Bush Villas, Southsea - not the Langham Hotel. It is there that Doyle conceived of and created the character, as he waited for patients in his sitting room.

Perhaps you think we're being a little harsh in our judgment; after all, Lippincott's helped to serialize the stories. While that may be true, the Strand Magazine had far more to do with that beginning in 1891. Plus, we're a little taken aback at just how much credit Team Langham wants to claim with regard to the origins of Sherlock Holmes. Lest you be in any doubt, here's the second paragraph of their press announcement:

The Langham played an important part in the creation of Conan Doyle’s most famous character. A regular visitor to The Langham in the 1880’s, Conan Doyle selected The Langham as the venue for a meeting that was pivotal in the development of Sherlock Holmes 125 years ago. On 30 August 1889, a dinner was held at The Langham between Arthur Conan Doyle, Oscar Wilde and Joseph Marshall Stoddart, Managing Editor of Lippincott’s Magazine, a monthly title publishing original fiction. Conan Doyle described this meeting as ‘a golden evening for me’, adding that ‘The result of the evening was that both Wilde and I promised to write books for “Lippincott’s Magazine” – Wilde’s contribution was “The Picture of Dorian Gray”, while I wrote “The Sign of Four”, in which Holmes made his second appearance.’ And so the famous series of Sherlock Holmes mysteries was born. [Emphasis ours]

In fact, we even took to Twitter to tell @Langham_Hotel that they had the facts wrong:

@Langham_London We're aware of the meeting that led to SIGN, but to call it the birthplace of Holmes is completely incorrect.
— I Hear of Sherlock (@IHearofSherlock) August 21, 2014


While the Sherlock Holmes Package at the Langham looks delightful - a Grand Room, English breakfast and two tickets to the Exhibition; avid fans can upgrade to the Arthur Conan Doyle suite in the hotel's famed cupola tower with "a separate sitting room, a writer’s corner and features books, DVDs and eclectic memorabilia from the legendary sleuth" - we have yet to hear back from the hotel's press team or to see a correction on their media centre.


If you would like to learn more facts about the life of Sir Arthur Conan Doyle, a great place to start is Episode 13 of our podcast, in which we interviewed Jon Lellenberg and Daniel Stashower, editors of Arthur Conan Doyle: A Life in Letters.