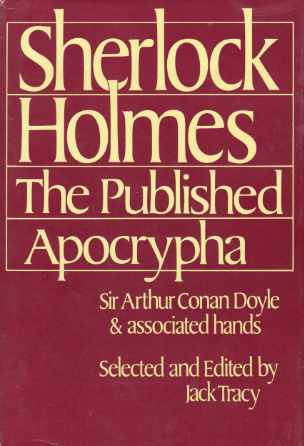 The Canon of Sherlock Holmes compromises four novels and fifty-six short stories. But there existed writings by Arthur Conan Doyle about Holmes or John H. Watson that are not part of the accepted Canon that, though they were published, were hidden, secret or obscure until 1980 when Jack Tracy collected them in Sherlock Holmes: The Published Apocrypha.

Six by Doyle were:

Also included were "The Adventure of the Two Collaborators" by J.M. Barrie, which as Tracy notes "Doyle called it 'the best of all the numerous parodies' on Holmes and thought so much of it that he gave it the place of legitimacy by including it in his autobiography;" the William Gillette plays "Sherlock Holmes" and "The Painful Predicament of Sherlock Holmes;" a plot outline for an unwritten Holmes story (now sometimes referred to as "The Adventure of the Tall Man") and "The Case of the Man Who Was Wanted" by Arthur Whitaker.

The value of the book, aside from gathering these disparate pieces in one place, was Tracy’s invaluable introductory notes on each, explaining when, how and why they came into existence. For example, the history of the Whitaker pastiche, for a short time thought by the world to be the 61st Holmes story from Doyle's hand, is succinct.

Arthur Whitaker sent his story to Doyle in 1910 in hopes of a collaboration. Doyle replied in a letter that while it was a fine story, Whitaker should invent his own characters and publish it. Otherwise, Doyle offered him around £10 for use of the plot. Whitaker, an unemployed architect took the money and Doyle filed it away.

Sir Arthur died on 7 July 1930, and his papers lay undisturbed for many years. Hesketh Pearson, in 1942, became the first to go through them, and he discovered ‘The Man Who Was Wanted.’

The Sherlockian world was electrified. A heretofore unknown Sherlock Holmes adventure! Pressure from many sources immediately came to bear on the Conan Doyle Estate to publish the piece. A paragraph or two were printed in Pearson’s 1943 biography of Doyle, but the Estate resisted the many offers for its publication….

At last, COSMOPOLITAN made a satisfactory offer, and "The Case of the Man Who Was Wanted" appeared in the August 1948 issue of that magazine, as well as in Britain’s THE SUNDAY DISPATCH during January 1949.

Then the truth came out. Arthur Whitaker, now retired, was still living. He contacted the Estate and was able to produce his carbon copy of the typescript as well as Conan Doyle’s handwritten letter, dated thirty-eight years earlier, in which Doyle offered to purchase the plot.

For those interested in a more detailed history, I highly recommend Jon Lellenberg’s Nova 57 Minor:The Waxing and Waning of the Sixty-First Adventure of Sherlock Holmes.

In 1981, Peter Haining came out with The Final Adventures of Sherlock Holmes which contained many, but not all, of the pieces in The Published Apocrypha: "Bazaar," "Watches," "Special," "Predicament," "Wanted," "Diamond," Trick" and the plot outline and Robert A. Cutter's pastiche based on it "The Adventure of the Tall Man."

Haining filled out his book with the Doyle penned essays "The Truth About Sherlock Holmes"(which contains Barrie's "Two Collaborators"); "Some Personalia About Mr Sherlock Holmes," "My Favorite Sherlock Holmes Adventure," two non-Holmes Doyle-penned mysteries "The Mystery of Uncle Jeremy's Household" and "The Mystery of Sasassa Valley," "The Case of the Inferior Sleuth" — two poems, Arthur Guiterman's "To Sir Arthur Conan Doyle" on Holmes' critique of Poe and Gaboriau and Doyle's reply "To an Undiscerning Critic" and "A Gaudy Death: Conan Doyle Tells the True Story of Sherlock Holmes's End," a 1900 article from Tit-Bits magazine. While in some respects it can be seen as a knock-off of Tracy's book, The Final Adventures has enough differences to be complementary, albeit, without possessing Tracy’s deep scholarship, a lesser work.

Definitely not a lesser work came out in 1983. Tracy wrote in his introduction:


"This book is subtitled 'The Published Apocrypha.' There still the unpublished Apocrypha — two tantalizing works in Sir Arthur Conan Doyle's own hand—which remain suppressed. They are The Angels of Darkness, a three-act play, written in 1890 based on the Mormon flashback in A Study in Scarlet, set in San Francisco, and having Doctor Watson for its principal character [see below]; and The Stonor Case, a 'first version' of the 1910 drama The Speckled Band."

Like with Tracy's The Published Apocrypha, the true value in Green's Uncollected is the deep research and scholarship each man brings to the table of contents. His introduction to "Plot for Sherlock Holmes Story" is concise and probably on-the-mark:


"This 'scenario for an uncompleted tale' was discovered by Hesketh Pearson, who included it in his biography of Conan Doyle. Although attributed to Doyle there is no evidence to show that it is by him and strong internal evidence to suggest that it is not."

And speaking of scholarship, there is boatloads of that in the Baker Street Irregulars Manuscript Series 2001 publication Angels of Darkness, the up-until-then unpublished Doyle play that launched a thousand speculations. William Baring-Gould based an 1886-1887 marriage of Watson to "Constance Adams" of San Francisco from second-hand knowledge of it. Would he still have posited a pre-Mary Morstan marriage if he knew that Watson was to be betrothed to Lucy Ferrier instead? Reading the play, one can understand why it was unpublished for so long. It is not very good, inferior to its source material “The Country of the Saints” section of A Study in Scarlet, heavy on melodrama and ethnic stereotyping passing for characterization. It is a product of its times and the essays by Clifford S. Goldfarb, Christopher Roden, Don B. Wilmeth and Michael W. Homer make its historical and theatrical context clear. The John Watson of Darkness may or may not be the Canonical Watson, but after 56 years of rumor and speculation after its existence was revealed by Adrian Conan Doyle's biography of his father, it was nice to have the play at hand and judge for ourselves. 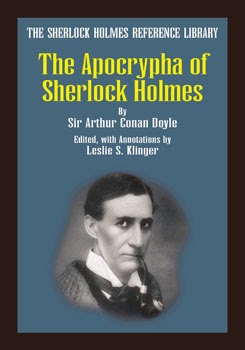 While newspaper or magazine articles might be rediscovered shedding new light on Doyle’s relationship with his most famous creation, it seems highly improbable that any more material from Doyle’s hand will appear that will be included in that select section called the Apocrypha.  Only Angels of Darkness and the Reference Library Apocrypha are currently in print; the others are readily available in the second-hand market. All the books mentioned in this post are worth seeking out.