A Look at the Cases of Sherlock Holmes by Renegade Press 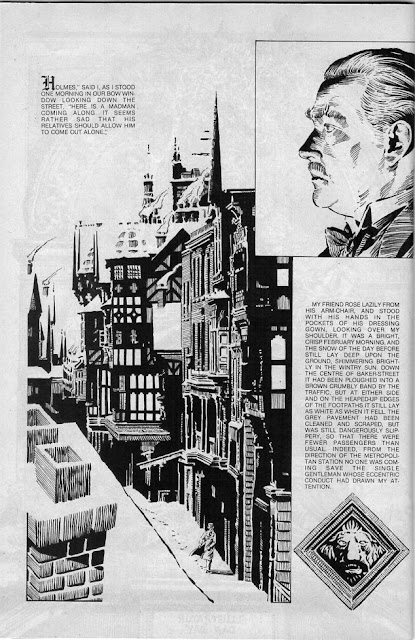 One of my friends gave me a collection of comic books they found at a used-books store: the “Cases of Sherlock Holmes” series by Dan Day. It was run by Renegade Press from 1986 til ‘88 and then by Northstar Publishing from ‘89 til 1990. I expected these to be a set of original tales featuring the Great Detective, based solely on the cover images. Open up the first issue, and the first page looks like the image seen on the right.


The illustrations were rich in detail and very evocative of a Victorian setting. Particularly pleasing is the amount of detail given to the characters - more than even the best Sidney Paget drawings could hope to give us, as we view them in reprints. The only drawback to the early issues of the Cases of Sherlock Holmes series is that the text was in ALL CAPS. No need to shout at me while I'm reading a graphic novel.

Some of you probably know about these already - for those of you who don’t, they’re worth looking for. They are, simply, the stories from the Canon put to illustration. The illustrations themselves are wonderfully detailed, and the layout is generally easy to follow. Most of the time the illustrations simply decorate the columns of text, but every now and then the reader comes across a dynamic spread - 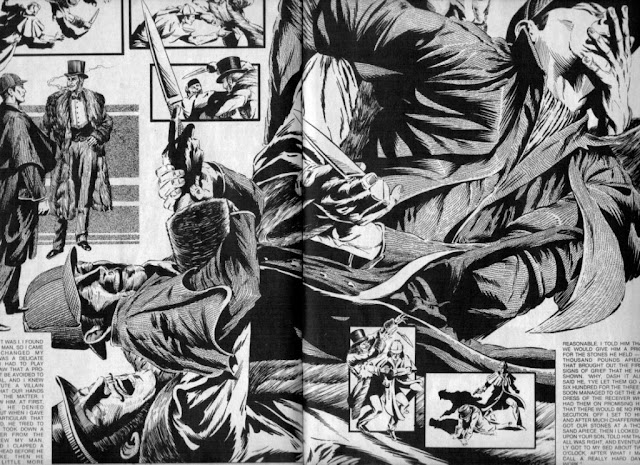 This is also from the first issue, “The Adventure of the Beryl Coronet”, and shows the confrontation between Holmes and the thief. Granted, there is some artistic license taken with the scene, such as Holmes wrestling over a knife, but it is stunning nonetheless.

While I’m on the subject of ‘artistic license,’ I should mention an aspect of these comics I find particularly entertaining: the covers. My initial supposition that these comics would be original stories was wrong, but I think I can be forgiven. The title of the story is not printed on the cover, and the illustrations tend towards pulp. 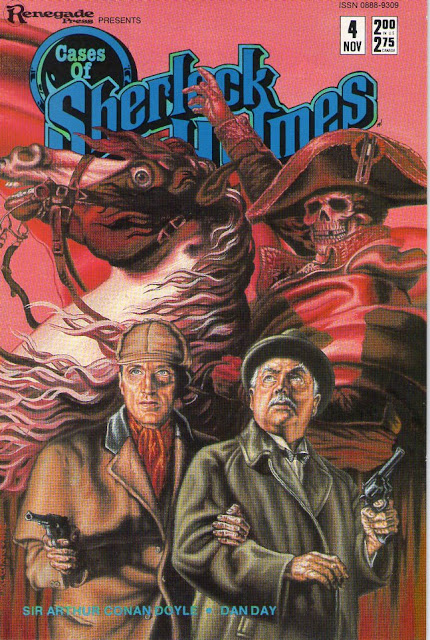 This one isn’t too bad, as “The Adventure of the Six Napoleons” does feature small statues of Napoleon, who is dead, hence the skeletal figure on the horse with the funny hat.

But what story could possibly have this cover image? 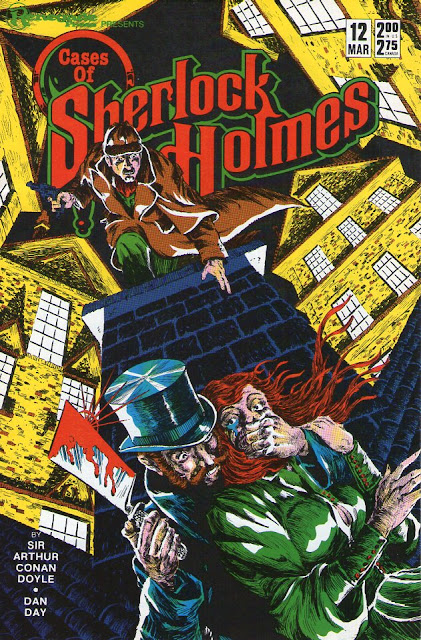 “Silver Blaze.” The story about a horse.

Oddly, of the 20 issues, one is an original pastiche. “The Strange Adventure of the Vourdalak” was written by Gordon Derry and is an interesting, thought-out tale that keeps the feel of the Canon while adding a little more action (and cocaine) in a neat setting - a traveling fair of gypsies, Turks and Cossacks in France. It is the only pastiche in the series.

These are a fun, quirky addition to my collection, and could be enjoyed by any Sherlockian who is a fan of comics or illustrated editions of the stories. They’re certainly worth keeping an eye out for at your local used books or comics store, or online.

Katie writes about Sherlock Holmes in science fiction (among other things) on her tumblr.