"The Receiving Station, As Well As the Transmitter" [3GAB] 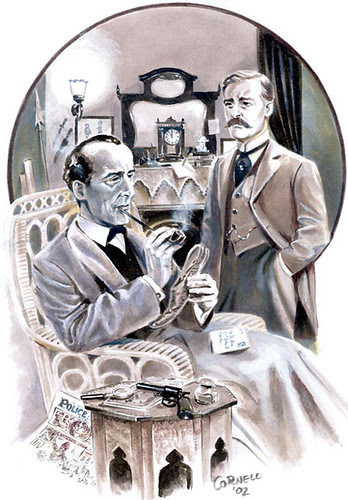 One of the advantages to audio adaptations of the canon (as well as newer creations of stories) is that there can be a greater emphasis on creating atmosphere through sound. Previously, we had highlighted a worthy adaptation of stories from the canon - now, we will highlight two companies who have put out Holmes-related audio that are not only intriguing, but also have appeal for the budget-conscious.

As part of their lower-cost audios, Big Finish has a one hour adaptation of The Adventure of the Speckled Band. Much like their previous audio adaptation of The Final Problem/The Empty House, the strength of this adaptation lies in a nearly straightforward telling of the Conan Doyle story. Much like its canon-based companion, The Speckled Band is a top-notch production that (at least, from my vantage point) will encourage a willingness to sample the rest of Big Finish's Holmesian efforts, including the non-canon original stories (whose titles and premises offer all sorts of delight). Big Finish releases a wide range of audio dramas, and their Sherlock Holmes series continues to provide high quality and entertainment, providing an excellent contemporary example of well-executed audio drama.


For those with a penchant for "classic" audio drama, Radio Archives has put out two volumes of The New Adventures of Sherlock Holmes, whose 1945 - 46 season featured Tom Conway as the sleuth, with Nigel Bruce reprising his role as Doctor Watson. By this time, the show had changed networks and sponsors (and indeed, there is something slightly disconcerting about hearing a commercial for hair products in the middle of an episode), but make no mistake - these radio dramas are strong in their own right, with some being relatively loose adaptations of the canon. Even to more modern ears, there is more than a hint of Victorian atmosphere in these stories....and these collections are easily affordable as digital downloads.