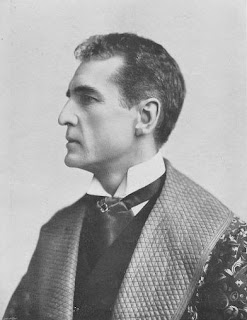 Every generation has its Sherlock Holmes. Currently, it's a pitched battle between Robert Downey, Jr. on the big screen and Benedict Cumberbatch on the small screen. A generation ago, it was Jeremy Brett; prior to that it was Douglas Wilmer and Peter Cushing. Certainly one of the monuments of all time was Basil Rathbone.

But before Rathbone - even before Wontner

- stood a giant of the stage: William Gillette. Gillette was a respectable gentleman who made a respectable living from the stage, not least of which were his 1,300 appearances as Sherlock Holmes, after close contact with Sir Arthur Conan Doyle in the late 1890s.

In this episode, we have an opportunity to speak with Henry Zecher, author of the first definitive biography of Gillette, titled William Gillette, America's Sherlock Holmes

. Mr. Zecher is a former award-winning sports journalist and editor who has written on a wide variety of topics. He has had a lifelong love of Sherlock Holmes and has followed his passion in writing about William Gillette over the last 14 years. You can read his full bio on his website.

We go inside the book and trace the early beginnings of Gillette as an aspiring actor, a stage manager and a playwright, learning how he took what was a questionable profession and turned it into one that would not only be palatable for his family but also for his fellow thespians, who ultimately conferred upon Will the title "Dean of the American Theatre." We'll also hear about his association with Helen Hayes.

Rather than a traditional reading of the Editor's Gas-Lamp, we're treated to a reading of Frederic Dorr Steele's tribute to Gillette upon Gillette's death, as well as a poem by Richard Burton, originally recounted in a special supplement to Vol. 3, No.3 (New Series) of the Baker Street Journal.