"Heard of It First By That Strange Wireless" [LION] 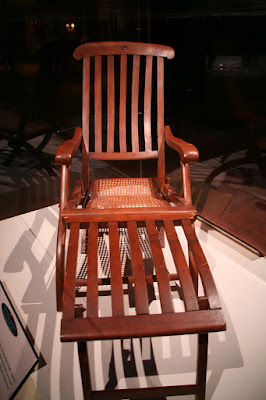 The reason we bring it up on our site is because there are some loose connections worthy of mention. The first is that there were two Marconi wireless radios aboard, staffed by Jack Phillips and Harold Bride. As you observed, the title of the post noted that there was a wireless mentioned in "The Adventure of the Lion's Mane," in which Holmes recounted,


"It was my old housekeeper who heard of it first by that strange wireless by which such people collect the news of the countryside."

Contrary to popular belief the Titanic was not the first time the SOS signal was used (it came into use in 1908), but Bride mentioned to Phillips, who had been using the more popular British CQD signal, that he should use SOS as it might be the last time he would have the opportunity to do so.

To ensure there was a connection, about 14 years ago, William Seil wrote Sherlock Holmes and the Titanic Tragedy: A Case to Remember, which was also a nod to Walter Lord's famous recounting of the tragedy in A Night to Remember

. In the Sherlock Holmes pastiche, we find the great detective and his faithful colleague on board the doomed liner following an agent on his way to the U.S. with secret submarine plans. While we don't normally do the whole pastiche thing, this was a quick and fun read.

For those of you who may be interested in this sort of thing, the Titanic Historical Society (THS) has been in existence since 1963. Founder Ed Kamuda owns a jewelry store in western Massachusetts, where he also keeps the Titanic Museum, Membership in THS will get you complimentary admission to the museum and also includes a subscription to their quarterly publication, The Commutator.

UPDATE: We've just been made aware of the Titanic Museum Attraction in Branson, MO and Pigeon Forge, TN. They actually work with the Titanic Historical Society, and from their website, they seem to be very impressive.

As the fateful anniversary is upon us, please take some time to remember the souls of all of those brave men, women and children who perished aboard the Titanic and the icy waters of the North Atlantic 99 years ago. While the tragedy may have been avoidable, it will stand as one of the greatest lessons of all time of man's hubris in the face of nature, and will forever remind us that we need to plan for the worst possible contingencies despite our confidence in our own technological advances. They did not die in vain.