"the intelligence of your correspondent" [VALL] 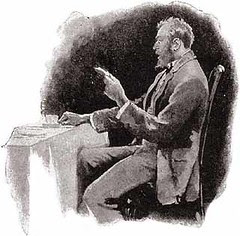 A little over five months ago, without much (or any) fanfare, this humble online publication celebrated its fifth anniversary. In real life, that is but a blink of an eye; but on the Web, it may as well have been a lifetime ago. To give you a sense of what was happening in the world just five years ago:
Our first post was on August 10, 2005 and compared with the other 492 posts since then, it wasn't all that earth-shattering. But over time, our efforts have both expanded and contracted, and the resultant site is what you see today. It has largely been a single-handed effort, but that is about to change - with your help.

Because the world of Sherlock Holmes is so full of news, information, events and new material every day, we determined that a single-proprietor model simply will not do. Our mission:


To be the definitive site for news and information


about Sherlock Holmes in popular culture.

For that reason, we're turning this site into a multi-author publication, wherein contributors can each cover topics of interest to them, on a cadence appropriate to each. You may have already seen examples from Steven Doyle and Francine Kitts, who are regular contributors; we have also welcomed first contributions from a handful of others as well. You'll continue to see some this week.

If you or someone you know would like to contribute to our site and help educate the world on what's new in the world of Sherlock Holmes - events, book reviews, games, etc. - please visit the Contribute page of the Who We Are tab you'll find at the top of the site. There you'll find an entry form that will allow you to become a contributor.

We look forward to expanding our coverage and our editorial team. We're looking for people who write well and who have an ear to the ground for Sherlockian developments. And it should go without saying that an avid interest in Sherlock Holmes is also required. For example, someone who would know to post an image from "The Five Orange Pips" in a post marking our five years in existence...

Thank you in advance for considering this opportunity and for sharing it with those you know.