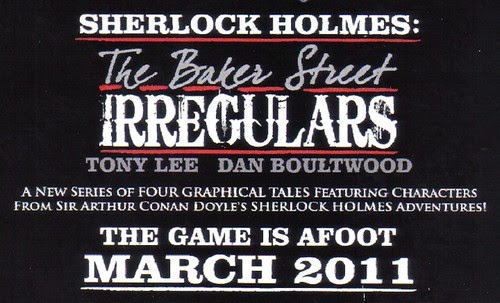 We recently reported on a pending series of graphic novels from Tony Lee & Dan Boultwood, titled "The Baker Street Irregulars" ("News About Sherlock Holmes in the Comics"). Today, we understand that the series has been green-lighted by Franklin Watts / EDGE Books.

The press release makes things sound ominous:
"Sherlock Holmes is dead – and the streets of London are awash with crime. And with no great detective to save them – who will the common people of London turn to?"

We're confident that the authors will be able to answer that question, and as a member of the Baker Street Irregulars, we're glad to see our name being used in a creative and engaging way. And as we understand it, one of our members has been advising Mssrs. Lee and Boultwood.

Even more interesting, Mr. Tony Lee himself has dropped by our Facebook Page to let us know that he got approval to move forward with the project. We'd appreciate it if you stopped over there and pushed that big "Like" button on the top of the page, if you haven't yet.

And now, the full press release from http://www.thebakerstreetirregulars.com:

This is the question asked in Sherlock Holmes: The Baker Street Irregulars, a series of four graphic novel stories released by Franklin Watts / EDGE books, a division of Hachette Children’s Books this coming Spring.

Written by New York Times List #1 Bestselling Graphic Novelist and Anthony Horowitz’s ‘Horowitz Graphic Horror’ adaptor Tony Lee, and with art by critically acclaimed ‘Prince Of Baghdad’ and ‘Horowitz Graphic Horror’ artist Dan Boultwood, these four books chronicle the adventures of the Baker Street Irregulars, characters mentioned in Sir Arthur Conan-Doyle’s Sherlock Holmes books ‘A Study In Scarlet’ and ‘The Sign Of Four’ as they take up the challenge of defending the Victorian city against the forces of evil; facing kidnappers, thieves, murderers and a criminal mastermind believed to be the notorious Moriarty, the man also believed to have killed Sherlock Holmes at the Reichenbach Falls several months earlier.

But the Irregulars aren’t alone – helping them are the reluctant Inspector Lestrade, the mysterious débutante Irene Adler and the steadfast Doctor John Watson, who uses his years of study under Holmes to assist this new generation of crime-solvers.

Set in the three ‘missing years’ between ‘The Adventure Of The Final Problem’ and ‘The Adventure Of The The Empty House’, the series concentrates on Wiggins, the only Baker Street Irregular named in any of Sir Arthur Conan-Doyles books, and his gang of detectives, including the female pickpocket ‘Pockets’, the chimney sweep apprentice ‘Ash’, the Chinatown inventor ‘Chen’ and the butcher’s assistant ‘Tiny’. Alongside the Irish Wolfhound ‘Fluffy’ and their mysterious first client ‘Eliza’, they find themselves in a variety of adventures that fans of the genre of any age can enjoy.

In the last few years there have been a multitude of child-friendly Sherlock Holmes spin-off books available, but these stories of the Baker Street Irregulars are unique; in addition to the fact that they are told in a graphical comic format, for one of the first times ever they are ‘canonical’ within the Sherlock Holmes universe, with perhaps the most acclaimed Sherlock Holmes expert alive today, Leslie S. Klinger coming on board as consulting expert for all four stories.

The editor of countless award winning academic books on Sherlock Holmes, including the ‘New Annotated Sherlock Holmes’ and the ten volume ‘Sherlock Holmes Reference Library’, Leslie S. Klinger is so respected in the industry that even the makers of the Sherlock Holmes movies starring Robert Downey, Jr and Jude Law have consulted his advice. And with Leslie involved, The Baker Street Irregulars moves from a simple series to a storytelling event that every self respecting ‘Sherlockian’ will want on their bookshelf.


What do you think? does this interest you? Will you be placing an order?