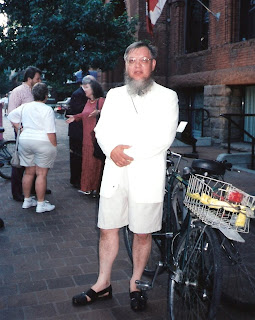 Tom Stetak, BSI ("The Head of the Police at Cleveland") was one of a kind. While we didn't know him all that well, he left a distinct impression upon all who knew him. Tom passed away last week at the relatively young age of 60 after a brief illness.

Tom's look was the first thing that caught our attention at Baker Street Irregular functions - his bearded countenance made him look Amish in nature, and his restoration business seemed to be in line with that appearance as well.

But it was his sense of humor that really set him apart. At the BSI Dinner in 1997, he was one of the many who stood up to roast Tom Stix, Jr., the outgoing "Wiggins" of the organization. Stix was known for his frank personality - which, depending on his mood, could sometimes be barbed. But he could also be a very warm and caring individual as well. And Tom Stetak sensed  that. One of the lines from his roast went something like:
"Many people say that Tom Stix isn't emotional, but it just isn't true. Why, Tom has more emotion in his middle finger than I have in my whole body!"

And then the whole room erupted in laughter, with the heartiest laugh coming from Tom Stix himself.

Tom Stetak was also part of the Florin Society - Irregulars with spouses who were also members of the BSI -  and he left his wife Ruthann. You can read Tom's obituary here.

If you have a memory of Tom, please consider leaving it in the comments section below.