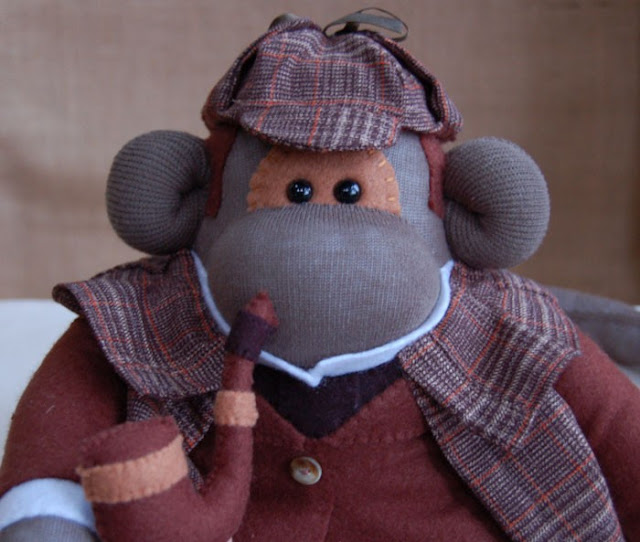 We love hearing from other Sherlock Holmes enthusiasts - many have similar stories of how we all got interested; a book, a movie, a visit to London. But sometimes there's a unique twist involved.

Here's an excerpt from a recent email we received from Matt:


"About five years ago, I caught a Hound of the Baskervilles showing on television and instantly became a fan Sherlock Holmes. My interest sparked when I shortly thereafter discovered Jeremy Brett's version,and I have seen every episode in that masterful Granada series

. A couple years ago, my job afforded me almost weekly travel between New York and London and I had the chance to visit the museum at 221B Baker St., stay in the hotel and visit the pub, both named after the legend.

"Another interest of mine since I was a small child, for some odd reason - perhaps their scientific binding to us, has been primates. I remember having collected several stuffed animals, one of which, a sock monkey, still "resides" with me in New York.

"For Christmas this year, my girlfriend took is upon herself to combine those two loves and have something unique created for me."

And this is where Matt included the following photos, courtesy of siansburys on Flickr.

Sian has an Etsy shop you can check out - and it looks like she does custom orders. It might be just the gift for the Professor Presbury in your life.
"Hey, would you like to buy a monkey?"