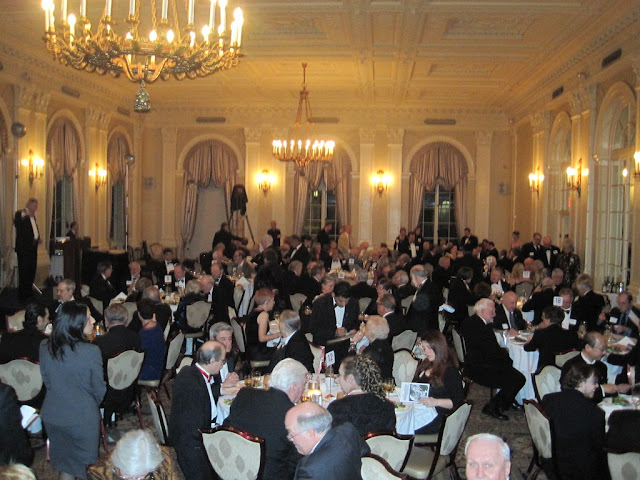 The Friday of the BSI Weekend is typically spent running from meal to meal. By the end of it, one begins to wonder if it was even a wise thing to do to commit to a breakfast, large lunch, and catered dinner all in a single day. But then one thinks back on the conversations had, friendships rekindled, and new faces met, and one realizes that it's well worth the expanding waistline.

The William Gillette Memorial Luncheon has been in existence for over 60 years. Currently held at Moran's Chelsea Restaurant, it originated as a lunch for out-of-towners who arrived early for the BSI dinner.

Now it's open to everyone who would like to attend, so you'll see a strong contingent of locals as well as travelers. The locals also include the Friends of Bogey's of Baker Street, a stage troupe who always have an humorous skit that incorporates William Gillette.

This year, hilarity ensued as they took a Holmesian approach to nursery rhymes and we were treated to Peter Peter Amberley, the Adventure of the Christmas Pie, the Three Rubadubs, the 24 Black Peeps, and a Cardboard Box containing the severed tails of three vision-impaired mice.

The highlight of the weekend for those who are invited to attend is always the annual dinner of the Baker Street Irregulars — the very event that that got this entire movement started. This year, there was plenty to be excited about, including some celebrity sightings such as Neil Gaiman, Laurie R. King and Curtis Armstrong, to name a few. But the real stars are the Sherlock Holmes enthusiasts who make it such an interesting place to be.

This year, the dinner was held at a new venue for the BSI — the Yale Club, just a couple of blocks from the Algonquin Hotel. It was the equivalent of the Union League Club, The Woman for 2010 — typically the (long-suffering) wife of a long-standing BSI member was Karen Gurion, wife of Andrew J. Peck, BSI ("Inspector Baynes, Surrey Constabulary"). She was toasted by Jerry Margolin ("Hilton Cubitt") and then she gave her own remarks.

Of Andy's acquisition of an original Frederic Dorr Steele illustration of Sherlock Holmes, she remarked, "That's art?" To which, noted dealer Otto Penzler, who was in attendance replied, "So sell it back!" Karen clearly warmed up to the group, saying that she felt like Sally Field: "You like me! You really like me!" And indeed, we do.

Following the cocktail party, we wound our way upstairs to the dining room and began the proceedings of the evening. Wiggins got right to the awards, first doling out a special crystal award with Queen Victoria on one side and Sherlock Holmes on the other, to Freda Howlett, widow of Holmesian Tony Howlett and one of the co-founders of the Sherlock Holmes Society of London. 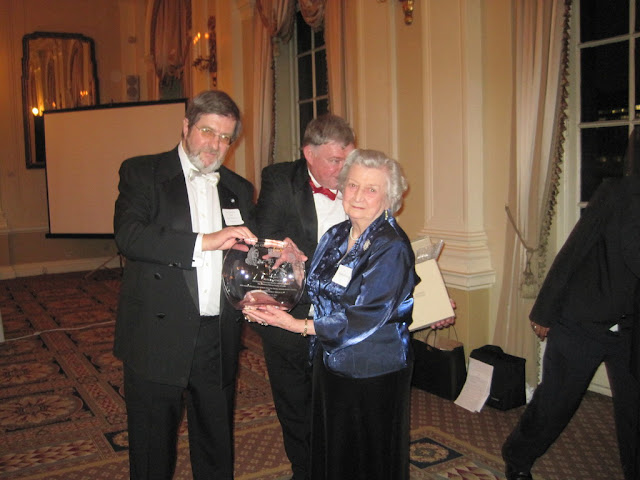 Directly following Freda's award, Mike launched into the Eddies - awards given to the editors of BSI publications to demonstrate his thanks for the hard work they've done. They were:

Some remarks from Wiggins followed: the BSI Archives will become increasingly important over the next five years and the correspondence of every member of the BSI is sought; more scholarly conferences around the country will be happening; and we need to keep in mind not to take ourselves too seriously. That being said, we launched into some papers, some serious, some not so serious.

Nils Nordberg ("A Norwegian Named Sigerson") opined on the Scandinavian roots of Holmes, and was followed by Sue Vizoskie ("Mrs. Saunders") who posited that Holmes was a woman (!). Finally, Nathan Hartley ("Penang Lawyer") discussed the original Penang lawyer and the real identity of James Mortimer. Then, Peter Blau ("Black Peter") took the podium and gave a toast to An Old Irregular - in this case, Bill Rabe. We'll have some of the audio at a later date. But Peter let us know that Bill, who was one of the inspirations behind "Aunt Clara," which we sing every year, got his inspiration from a song called "Mush Mush."

Henry Boote ("Meyers, Toronto") stepped up to tickle the ivories and gave us a rendition of "Mush, Mush" and then invited Scott Monty to belt out a few stanzas of "Aunt Clara" with gracious help from the audience on the chorus.

And as if that wasn't enough musical entertainment, we were joined by Ray Jessel, the songwriter who was responsible for the Broadway musical Baker Street (you can purchase it by clicking through)

. Ray gave some brief remarks and then played a few songs on the piano, including the memorable "A Married Man." He shared that to write for Watson was eaier, as "he represents the human element" in the Canon.

To say that it was a treat to hear Ray play would be an immense understatement. 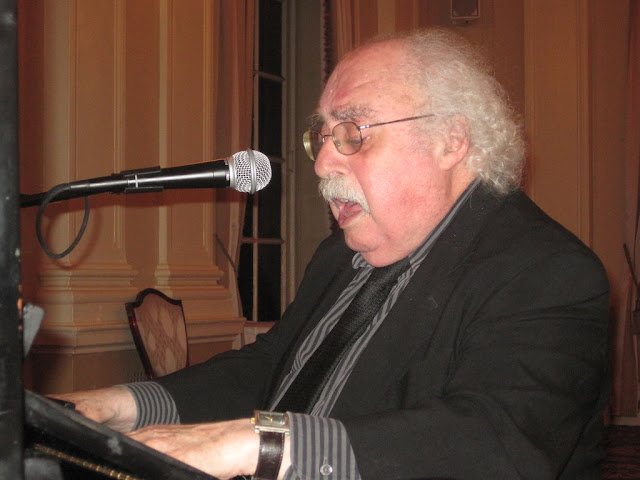 We then stood on the terrace for the BSIs we lost over the last year. They included: Edwin King, Joe Fink, Ed Lauterbach, Edward Starr, Richard Warner, Frank Beckman, and H. Paul Jeffers. Then it was time to move on to the happier part of the program...

The awarding of the irregular shilling is always a marvelous thing. There were nine in the class of 2010, as well as three Two-Shilling Awards:
The dinner concluded with the reading of "A Long Evening with Holmes."