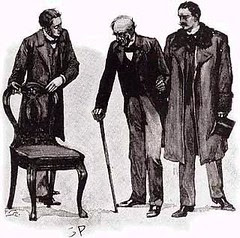 Hold onto your seat, folks. That is, if you happen to attend a screening of the new Sherlock Holmes film and you're in a theatre that happens to accommodate the technology described below - one that will literally move you.

Of course, this isn't entirely new. You may recall hearing of a film from 1959 called The Tingler

, in which a pathologist discovers that a parasite growing on the spine - a "tingler," can only be stopped by screaming. Director William Castle employed the gimmick of electrical buzzers installed in seats and set them off during appropriate moments during the film. More on that from Wikipedia.

Anyway, here's what D-Box is bringing us for Christmas:

Audiences will experience the classic, adventure-mystery like never before from seats that move simultaneously with the onscreen suspense and intense action. With motion effects embedded frame by frame, sensations of motion occur during action scenes, while seats remain still during quieter, dialogue-driven sequences.

"With nine new releases, a fourth one with Warner Bros and 10 movie theatre locations to date, we are thrilled with how well D-BOX has been embraced by the industry and movie fans alike," said President and CEO, Claude McMaster. "Since introducing D-BOX Motion Code(TM) in Hollywood earlier this year, we have continued to experience rapid growth, offering the D-BOX experience to moviegoers in the Western United States and Midwest as well as in Canada. We look forward to adding new theatres and continuing to build on our strong support from Warner Bros. and many more industry leaders."

Makes us glad we live in Southeastern Michigan. Of course, we have to wonder how the seats will react to Rachel McAdams' appearance as Irene Adler...