Via the Hounds of the Internet, Peter Blau reports on a new comedic play called The Unexpected Return of Sherlock Holmes. The Web site gives the following synopsis: 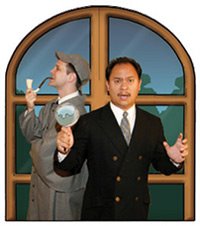 For the past month, Baffler Manor has been spooked by sightings of a strange ghostly figure. The head of the household and a veteran actor of the English stage, Desmond Westhaven believes only one person can solve the case: Sherlock Holmes. So, he summons the next best thing - the mind behind the world's greatest detective, Arthur Conan Doyle.

But things aren't always what they seem. Doyle unknowingly brings his own ghost - Sherlock Holmes himself. Unseen by others, Holmes follows his creator everywhere as Doyle attempts to ferret out the truth. New age spiritualism versus cold, deductive logic, the misadventure builds with an actual murder, affairs of the heart, the author's peculiar reactions and the detective's witty retorts. Can the case actually be solved? The game is afoot!

Written by Jack L. Herman and directed by Bill Wolsky, the play is running from September 23 - October 14 at the Sierra Stage in West Hollywood, CA. Ticket availability and more information on the play can be found through the link above.
9/24/2006 03:28:00 PM
blog, events, fun, News

You MAY want to clarify exactly who wrote the play that Mr. Herman is taking credit for.

Thank you, my dear Barrister. I had completely forgotten that I wrote about this play.

Recently in the news again, the play is now somewhat more infamous, thanks to the investigations of Peter E. Blau, BSI. Peter corresponded with David Belke, who wrote a play called The Reluctant Resurrection of Sherlock Holmes in 1992. The Herman's work bore a striking resemblance to Belke's original work.

And there's a good reason: Herman plagiarized it (or would that be PLAY-giarized?). More information can be found within The Edmonton Journal.