"I must kick off my boots and stockings" [SIGN] 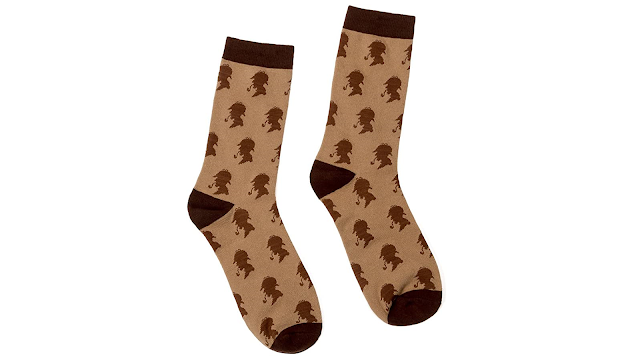 Fancy socks — some of them with Sherlockian patterns — are in style just now. These otherwise humble garments also make one fleeting and memorable appearance in the Sherlock Holmes tales, along with a handful of insignificant ones such as the discovery of Neville St. Clair's socks in the room that he used for his transformation into Hugh Boone.
The story where socks take center stage for a moment is "The Three Garridebs," in a passage that David L. Leal pointed out in an article in The Baker Street Journal last year. The moment "is hilarious, and I never tire of it," he wrote. The locale is the Baker Street sitting-room; the speaker is John Garrideb, later to be dramatically revealed as "Killer" Evans, counterfeiter and gunman. He claims to be an American, a lawyer from Kansas, but Sherlock Holmes observes that his clothes are British: "The shoulder cut of your coat, the toes of your boots — could anyone doubt it?"
Garrideb replies:

"Well, well, I had no idea I was so obvious a Britisher. But business brought me over here some time ago, and so, as you say, my outfit is nearly all London. However, I guess your time is of value, and we did not meet to talk about the cut of my socks. What about getting down to that paper you hold in your hand?"

From that moment, Holmes is suspicious of the American, whose business card gives his address as Moorville, Kansas, and uses the grandiose American title of "counsellor at law." When he speaks of having been "in the law at Topeka," the capital of Kansas since statehood was granted in 1861, Holmes makes mention of an entirely bogus "Dr. Lysander Starr," supposedly a former mayor of the city. Garrideb falls into the trap by agreeing that "his name is still honoured."
The story Is familiar enough. But we might pause to think about that mention of (perhaps fashionable) socks In the context of prominent figures in the frontier state of Kansas. "The Three Garridebs," published in 1924, is almost certainly set in the summer of 1902, a period when populism (largely born of rural desperation, so that socks were a luxury) was still struggling with conservatism for dominance.
In that era, if you mentioned socks in the same breath as Kansas, you could only be referring to Jeremiah Simpson (1842-1905), who served as a United States Congressman from Kansas for six years (1891-1895 and 1897-1899). One of the most memorable representatives of the rural populism of his era, he had been born in Prince Edward Island (part of Canada from 1867 onward) but raised in New York.
He served with an Illinois regiment during the Civil War, worked on ships steaming the Great Lakes from Indiana, and finally settled on a Kansas farm. During hard times in 1883-1884 he joined a locally organized political movement. Things got worse in 1889, to the point that farmers were burning their main crop, corn, for fuel. (They would soon be switching from corn to wheat, easier to grow in conditions of frequent drought.)
When the 1890 election came along, Simpson was nominated for Congress by the People's Party, the Democrats not yet being a force in the region. He faced a Republican candidate, a wealthy railroad attorney who, he charged, even wore "fine silk hosiery." Silk socks were better than none at all, the Republican unwisely shot back, and "Sockless Jerry" was elected in a landslide. His name is still honoured (to borrow Holmes's phrase) as an icon of Kansas populism.
Could Holmes have been aware of the story of Sockless Jerry Simpson in 1902? Could Watson, or that fellow Arthur Conan Doyle, have known about him in 1924 and dropped Topeka (and socks) half-consciously into the story of a con man who claimed to be from the Sunflower State? Research has not been done, but it seems likely that The Times and other newspapers known at Baker Street might have mentioned the sockless politician once or twice, and his story, once heard, is hard to forget.
--
7/18/2020 07:07:00 AM
blog, Chris Redmond, fun, history, merchandise