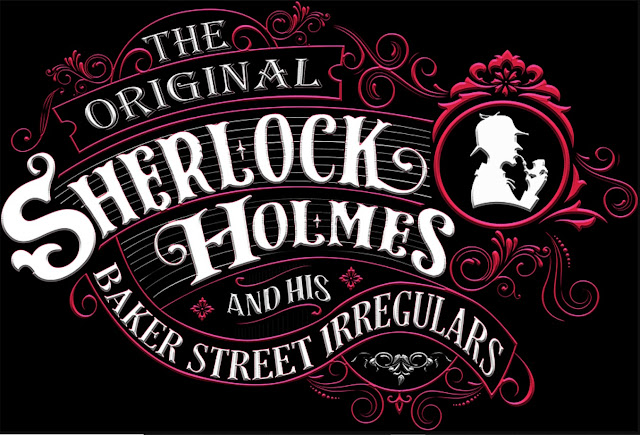 The last time we spoke with Michael McClure, BSI ("Stimson and Co.") was on Episode 164, where we talked about his interest in Popeye and the soon-to-be-revealed Sherlock Holmes statue in Chester, IL.
Mike also has also been hard at work, through Baskerville Productions, on creating a new game called Sherlock Holmes and His Baker Street Irregulars, launching today on Kickstarter.
This is the first tabletop game to be deeply anchored in all 60 Sherlock Holmes stories. It consists of artwork representing the characters, both Villains and Victims, that have been painstakingly fleshed out for a spectacular “first-look” at the varied characters that populated Conan Doyle’s tales.
The art is detailed, and those in Sherlockian circles may be able to identify some of their fellow Sherlockians on the four sets of cards (leave us a comment below if you think you can guess who's who!).

The game play is easy enough for the younger fans, but Baskerville Productions also created it in a way to be challenging for the longtime devotee. Like other iterations of Sherlock Holmes, this game can serve as a gateway to each player’s further exploration of Conan Doyle’s original works.
Each competitor, having chosen one of five Inspectors of Scotland Yard (or one of five Woman’s Patrol members), receives 13 Baker Street Irregulars (shilling-sized chips representing the boys and girls that Sherlock often employed) to aid them in their investigations. The BSI act as the game “currency” as they secure witnesses, locations and artifacts that supply the evidence needed to arrest some of the Canon’s most heinous Villains. Holmes, Watson, and Wiggins are available to help with each round, but the Inspectors are attempting to prove their own mettle and earn the title of “Rival to Sherlock Holmes.”
Lestrade is a playable part of the game (Plot Twist cards), but when he weighs in, things tend to go awry. A player may choose from 5 male Inspectors and 5 female volunteers from the Woman's Patrol. 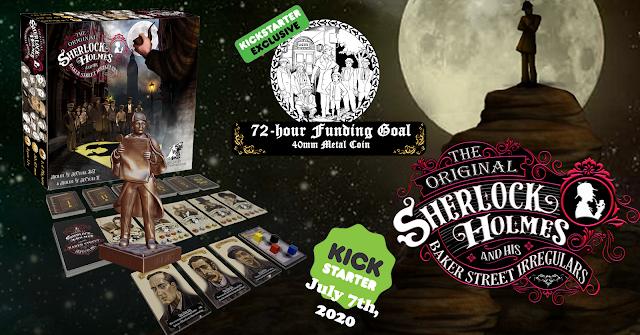 The Kickstarter campaign includes other goodies: a metal miniature replica of the Chester Baskerville Society’s “Sherlock Holmes Statue of America.” The included mini-monument serves as a trophy for the player that succeeds where all others fail. Also, for the first 72 hours only—a Kickstarter funding exclusive—a beautiful commemorative coin featuring Holmes and his Irregulars and serving as a directional reminder during gameplay, will be given to funders.
Please join the launch of a resource that supports the mission to educate those unfamiliar with Sherlock Holmes and to provide quality entertainment for his most devoted fans.

Ready to travel back in time to Victorian London?  In “The Original Sherlock Holmes and his Baker Street Irregulars,” you take on the role of an inspector or a women’s patrol volunteer, as you attempt to arrest London’s greatest criminals.
To set up the game, shuffle each deck of evidence cards with matching roman numerals.  Shuffle the villain deck and reveal the top 5 villain cards.  Then shuffle the Plot Twist deck and set it to the side.
Each player picks a color, grabs the wooden cube and 13 BSI tokens of that color, and is a dealt random inspector card.  Use the players’ cubes to randomly determine the player order and place those cubes on the arresting order board, starting in the 1 position.  Now you’re ready to begin.
The game consists of 4 rounds, and each round is broken up into 4 cycles of card drafting.  Each cycle consists of 3 phases: the investigate, arrest and tail phase.  Start each round by drawing a number of cards from each of the 5 evidence decks equal to the number of players (for example: in a 3 player game, draw 3 cards from each deck).  Shuffle those cards together and deal 5 cards to each player.  Once players have their cards, a Plot Twist card is revealed and the effect is resolved.  Now it’s time for the Investigate Phase.
In the investigate phase, players look at their cards, choose one to keep and pass the rest to their neighbor. Once all players have chosen their card, the cards are flipped and each player spends the required number of BSI tokens based on the cost in the bottom right corner of the card.
Next is the arrest phase. Player order follows the arresting order board, starting with position 1, where each player decides if they will arrest an active villain. To arrest a villain, a player must posses evidence cards with the icons matching the icons at the bottom of the villain card. If a player chooses to arrest a villain, they take that Villain card and flip over their evidence cards used to arrest them. A new villain is drawn to replace the  spot, and the player’s cube is moved to the bottom of the arresting order, and all other cubes are shifted up.
Once each player has decided to arrest or not, the tailing phase begins. Again, player order follows the arresting order board, each player has the opportunity to use one BSI tokens to tail a villain. To do this, a player places their token on a villain. During a later arrest phase, that villain will now require one less icon to arrest for that player. Players are not allowed to tail more than one villain and only get their BSI token back if they or someone else arrests that villain.
After the tail phase, players pick up the cards passed by their neighbor and start the next cycle’s arresting phase. This cycle is repeated 4 times per round. On the fourth cycle, during the investigate phase, each player will choose one card and discard the other to the center of the table. After the 4th tail phase of the round, players will start the BSI Bonus phase. Here the remaining Evidence cards, along with the Holmes, Wiggins and Watson character boards are placed in the center of the table. Starting with the player with the most remaining BSI tokens and going in descending order, each player chooses one item from the cards and boards in the middle of the table. At this point, players take back all their spent BSI tokens and prepare to start the next round.
This process is repeated over 4 rounds, each round starting with being dealt 5 new evidence cards and revealing a new plot twist card. After 4 rounds, each player totals up their victory points based on villains they arrested as well as the secret objectives on their inspector cards. The player with the most victory points is crowned as Rival to the Sherlock Holmes and is the recipient of the metal Holmes trophy included in the game… until the next time the game is played when they must prove their skills as a detcetive again.
The game plays 1-4 players (possibly 5 if stretch goals are met), ages 12 and up and plays in 30 to 45 minutes. Think you’ve got what it takes to rival the great Sherlock Holmes? Hurry inspectors, the game is afoot!