"He has played a not unimportant part in this drama," [RESI] 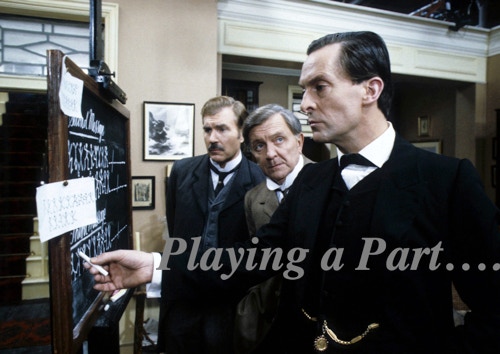 Fans of Jeremy Brett will want to act on this information straight away. There's a new biography of the actor available on Kickstarter from MX Publishing. Hurry: the campaign ends on July 18, 2020.
Jeremy Brett: Playing a Part by Maureen Whittaker is a biography of the actor of unparalleled scope, covering the entirety of Brett's performance career. At more than 450 pages with hundreds of color and black and white photos, the book is available in hardcover and paperback editions, based on the level of support you choose.
The foreword is written by David Burke, who played Jeremy Brett's first Dr. Watson in the Granada series.
We had an opportunity to sit down with Maureen Whittaker, author of Jeremy Brett: Playing A Part, and ask her a few questions about the project. 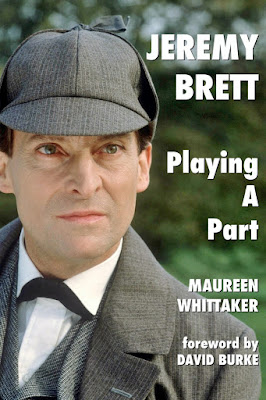 IHOSE: How did the idea for this book come about?  When did you first become a fan of Jeremy Brett?

MW: I have followed Jeremy’s career for a very long time, having seen him on the television, mostly in the classical plays for the BBC. Maybe it was his appearance as D’Artagnan in The Three Musketeers that first grabbed my attention. He was a most attractive and romantic leading man in The Rivals or as Lord Byron and he became the actor that I looked forward to seeing on the cast list. Later, his appearance as Berowne in Love’s Labour’s Lost and Max de Winter in Rebecca would be greatly anticipated.
When I looked for information about his early career there was no reliable biography or full career book.  The best accounts were provided by Jeremy’s interviews with journalists who wanted to celebrate his success as Sherlock Holmes.  And Jeremy was always ready to share his experience and the thrills of being an actor.  As a teacher of English in Secondary School I used the film version of The Merchant of Venice with the students and we all agreed his interpretation of Bassanio was outstanding. The Granada Studios Sherlock Holmes was also used alongside the Conan Doyle stories to teach the skills of detective writing.

The book includes hundreds of photos in colour and black and white. Tell us from where these were assembled.

The photographs were provided by Linda Pritchard, Jeremy’s partner who cared for him in the last few years of his life.  A large section of these had been part of Jeremy’s personal collection and the Granada Studios collection has been agreed by the Archivist at Granada and Charles Allen the Chairman.

What’s different about this book than other Jeremy Brett books that have preceded it?

This is the first complete career book for Jeremy and I have used Jeremy’s own words, or those of the people he had worked with to provide the information wherever they were available. Friends have also given their opinions and the critics of the performances provide another indication of the success of the productions. The only other biography/career book that has been published, now out of print, contained too much speculation creating confusion between fact and fiction. Everything within my book has been verified and supported from original sources. It also includes radio, television, special appearances and audio recordings.

When you think about Jeremy Brett’s career spanning the stage and large and small screens as it did, what stands out, other than Sherlock Holmes?

Jeremy will always be remembered for playing Freddie Eynsford Hill in the acclaimed musical My Fair Lady and the accounts of his time in Hollywood are full of personal reminiscences of tea with Mary Pickford and lunch with Dorothy Parker and the run-ins with Rex Harrison about where he should sing his one song “On the Street Where you Live”.
His appearance as Lord Arthur Goring in the Oscar Wilde play An Ideal Husband is a delight as he is totally convincing as the sophisticated romantic hero who could deliver his bon mots with elegance and style but still defeat the schemes of an unscrupulous woman here played by Margaret Leighton. His Dracula on the Broadway stage would be something which Jeremy could throw himself into with his usual verve and enthusiasm and which he enjoyed enormously. His performance was greeted by an audience who were “wildly enthusiastic” and the universal acclaim from the critics also lifted his heart.
The television production of The Picture of Katherine Mansfield was a revelation as John Middleton Murry was an intellectual, one of the founding critics of literary criticism, who was married to the famous novelist but after her early death from tuberculosis was remembered as one of the most hated men of literature.  This was another performance in which Jeremy became another human being totally different to himself and alongside Vanessa Redgrave they were described as “magical to watch.”
First and foremost, Jeremy was a classically trained actor who received acclaim for his classical roles.  His Hamlet at the age of 26 years was a personal success as it earned him significant praise from a sophisticated West End audience. But it is perhaps his time at the National Theatre which gave him the greatest joy as he relished the opportunity to speak the words that Shakespeare provided. Jeremy said he loved the rhyme and rhythm of the poetry and although his dyslexia made it difficult, he approached it with dogged determination until he was word perfect and could “bounce on it.”
His time at the National Theatre under Laurence Olivier provided the best possible training and would hone his estimable talents. As You Like It was celebrated as the first all-male production and was greeted with much excitement from the media. In one article the critic had chosen Jeremy for his choice of clothes. Even the Vogue and Queen magazines labelled him as "Man of Fashion" and featured his trend setting style.
But it was perhaps his performance of Che Guevara in Macrune’s Guevara which most impressed the critics. He looked nothing like the pictures of the South American revolutionary, the man with high ideals for mankind, but by his technique of “becoming” he was able to convince the audience and the critics who praised him for a performance of enormous “power and sensitivity”. He said:

“I was intrigued by Guevara’s exploits over there, so I decided to go and follow his route. Actually, this was a rather sad thing to do because, of course, everything ended for him in Bolivia.”

Jeremy spent six months backpacking around S. America.
His appearance in Rebecca is perhaps the favourite of so many of us as he has caught the tragedy of the haunted man Maxim de Winter in a four-part production which the author thought was the closest interpretation of her famous novel. Jeremy’s performance was inevitably compared with that of his mentor, Laurence Olivier in the film of 1940 and it does not suffer from the comparison, indeed many find his interpretation preferable as an authentic Maxim who was capable of murder.
Edward Ashburnham in The Gentle Soldier is remarkable and it is this that persuaded Michael Cox to choose Jeremy to be the next Sherlock Holmes.

For which portrayals do you think Brett doesn’t get the credit which he deserves?

His time in Canada at the Stratford Shakespeare Festival was a strange experience for both Maggie Smith and Jeremy. They had been used to receiving universal acclaim for their work and for some reason the critics were far too critical. They didn’t appreciate the incomers bringing their new approach to the Shakespearean canon. The adverse comments attracted the attention of The Stage magazine who tried to find the reasons why the reviews were so different to the critics of The Financial Times, The New York Times or The London Evening Standard who had welcomed the same productions with a very different tone. The Stage called it “The Clash of the Critics” and the excuse seemed to be the Atlantic Ocean which separated the two nations.
Jeremy’s production of The Tempest was greeted with much the same response as the critics were unable to accept the revengeful image of an angry Prospero. But they seemed to miss the message of the play as a journey to forgiveness which Shakespeare had presented successfully for the first time in the three hour performance on stage.

We see David Burke wrote the Foreword. How did you manage to make that happen?

When we were gathering together Jeremy’s friends and colleagues for the twentieth anniversary of his death for the installation of his memorial bench on Clapham Common in 2015 I wrote to David and to Michael Cox to ask if they might join us for the occasion. Michael was too unwell to be with us but David was most gracious and telephoned to say he would join us. We have spoken on several occasions and he has willingly offered his assistance.

Tell us about any one surprise or obscure fact in the book that you’re particularly fond of.

The production of the play Traveller Without Luggage on stage in 1972 and it is perhaps the most difficult one to read about as the story is so terrible. Jeremy was a very sensitive man and he must have been moved by the experience. The script recounts the story of the soldier, an amnesiac found wandering on the deserted railway station in Lyon who has returned from the Great War in 1918. Without relatives, he was locked up in an asylum. However, dozens of families came forward to claim him as their lost son or brother and Gaston tells of being hugged by hundreds of strange men and women who tearfully claimed him as their son. The real story was much more tragic as the soldier was identified by his grieving family but was never released from the asylum as litigation amongst the other families kept him there. He died during the Second World War probably from hunger and became known as “the living unknown soldier”.
One personal detail I had known little about was the stunning soprano voice of his youth which was trained at Eton where he was given the major solos to sing in the College Chapel. He even performed in many of the nation’s cathedrals. Jeremy also made a record but I can find no evidence and would love to hear a recording of his voice which is said to sound like that of the soprano Elisabeth Schwarzkopf.
--
Thanks to Maureen Whittaker for joining us for this interview.
Be sure to get to the Kickstarter page and make your selection before it's too late. As a bonus, if the project reaches 100 backers, MX Publishing will plant 100 trees as part of its #bookstotrees project for Happy Life Children's Home in Kenya.
7/16/2020 05:00:00 PM
blog, books, interview, Jeremy Brett, stage, television