"so subtly influenced by it" [STUD] 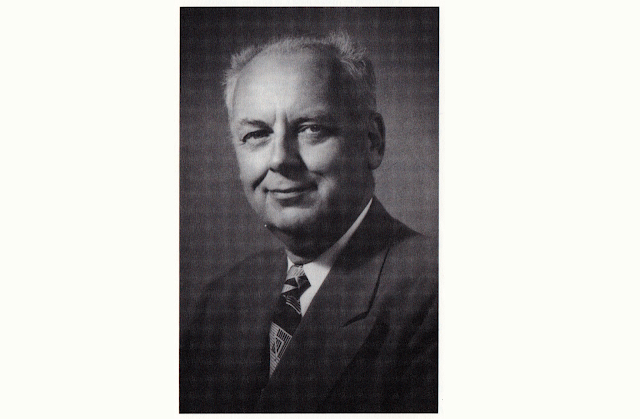 Most of us are familiar with Edgar W. Smith. He served as the second head of the Baker Street Irregulars, acting as an able administrator from 1940-1960, after he convinced Christopher Morley to take the organization out of its three-year hibernation (1936 was the last dinner before the 1940 dinner).

Smith was also the first editor of The Baker Street Journal, the quarterly publication of Sherlockian work that he and Ben Abramson birthed in 1946. In the Old Series (the 13 issues that ran from 1946-1948), Smith created the tradition of "The Editor's Gas-Lamp," which continues to this day.

His writing belied a master wordsmith, just as he applied his administrative acumen from the industrial world to the BSI. His language was very nearly like poetry, but without being flowery. Smith's writing conjured powerful images while not seeming as if it was trying too hard. In short, each of his essays were masterpieces.

What could be called Smith's cornerstone essay was his Gas-Lamp titled "The Implicit Holmes" (BSJ OS Vol. 1, No. 2, April 1946). In it, he asked  “What is it that we love in Sherlock Holmes? And then he went on to artfully describe the surroundings in which Holmes found himself:


"We love the times in which he lived, of course: the half-remembered, half-forgotten times of snug Victorian illusion, of gaslit comfort and contentment, of perfect dignity and grace. The world was poised precariously in balance, and rude disturbances were coming with the years; but those who moved upon the scene were very sure that all was well: that nothing ever would be any worse nor ever could be any better. There was no threat to righteousness and justice and the cause of peace on earth except from such as Moriarty and the lesser villains in his train. The cycle of events had come full turn, and the times were ripe for living – and for being lost. It is because their loss was suffered before they had been fully lived that they are times to which our hearts and longings belong.

"And we love the place in which the master moved and had his being: the England of those times, fat with the fruits of her achievements, but strong and daring still with the spirit of imperial adventure. The seas were pounding, then as now, upon her coasts; the winds swept in across the moors, and fog came down on London. It was a stout and pleasant land, full of the flavor of the age; and it is small wonder that we who claim it in our thoughts should look to Baker Street as its epitome. For there the cabs rolled up before a certain door, and hurried steps were heard upon the stair, and England and her times had rendezvous within a hallowed room, at once familiar and mysterious…

Simply put, this is beautiful, simple, and evocative language. For this editor at least, it always provides something to aspire to.

In Irregular Records of the Early Forties by Jon Lellenberg (published in 1991 for the BSI Press History series), Peter B. Spivak wrote a chapter titled "Baker Street Industrialist," which was a deeper look at Smith's career at General Motors. It seems that his facility with the language was evident there as well, as he was said to be

"unrivalled in his ability to make what was technical seem sensible and interesting to those who read it. He wrote in a style which made it easier for GM's large and growing staff to understand and follow the policies and future plans of General Motors. The company's archives describe him as 'a great speechwriter.' In a company which has a tradition of excellent speechwriters, Smith's style stands out, and is remembered even though he has been away from the company for well over thirty years."

How wonderful that Sherlockians continue to be the beneficiary of Edgar Smith's literary talents, preserved for future generations thanks to his Pamphlet House publications, the Baker Street Journal, and Profile by Gaslight which Smith edited.

"we saw a sudden light" [SPEC]

We've owned a few copies of the Heritage Press edition of the Sherlock Holmes stories for a while. This is the three-volume set that comes in black slipcases, with a raised cameo of Frederic Dorr Steele's profile of Sherlock Holmes on the cover. It was the definitive text, corrected and edited by Edgar Smith, and released between 1950 and 1952.

It's one of those volumes of the Canon that we had to have, but didn't pay much attention to the text of it because...well, these are the same 60 stories we have in the Doubleday, Annotated, Oxford, John Murray and other editions that we own.

Recently, we were able to add the Easton Press updated vesion to that set (printed in 1981). The covers are black with three gilt icons on the covers and spine: one volume has a magnifying glass, another a deerstalker, and the third a pipe. Clearly, adding this to our library was for the visual appeal. 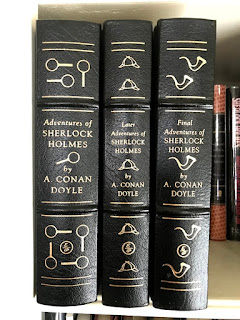 Despite that singular appeal, we opened up the first volume and spent some time with the introduction by Vincent Starrett (reprinted from the Heritage Press edition). It's such a pleasure to lose oneself in the joy and wonder of those early Sherlockian giants!

The Starrett essay had a ring of familiarity to it, though. Pulling another book from our collection, we realized it almost instantly: it was an excerpt and agglomeration of material from The Private Life of Sherlock Holmes, published in 1933. (For an in-depth look at The Private Life, please see Ray Betzner's 17-part series on VincentStarrett.com.)

One paragraph stood out to us from the introduction, appearing as the final paragraph of The Private Life from the chapter titled "No. 221B Baker Street." See if it has a familiar ring to it:


"And who is Sherlock Holmes? The spirit in a town and of a time. He is the fog in that crying old street, Baker Street; the glow of sea coal in the grates, where the English servant bring in to you tea and muffins, and snug napkins of odorous toast. He is...the mystery of the house opposite; of the grubby little shop around the corner you noticed and wondered about; of the old, old lady, half perceived in her shining brougham, who passes through empty Eaton Square every Wednesday afternoon. Sherlock is he who answers when you ask the air, Who lives there, I wonder! What is the story behind that drawn blind in London?...From him you may expect something much too subtle to be advertised. Cabs slurring through the mud, sounds and sights and presences of the old nineties in Baker Street — that time and that place which above all thought itself final, and that nothing different was ever going to happen again."


Starrett credits this quote to William Bolitho: The Last Bow.

To us, phrases like "snug napkins," "half perceived," and "cabs slurring through the mud" are eerily similar to "snug Victorian illusion," "half-remembered, half-forgot," and "cabs rolled up before a certain door." While they aren't exactly the same, there's enough there that made Bolitho's paragraph jump out to us as a possible influence on Smith's "The Implicit Holmes."

Who was Bolitho and how likely would it have been that he entered into the mind of Edgar Smith before Smith penned his essay?

William Bolitho Ryall was a South African journalist who wrote under the name William Bolitho. He was among one of 16 soldiers who were buried alive in a mine explosion in Somme in 1916, of which he was the sole survivor.

Following the war, he became the Paris correspondent for the Manchester Guardian, and eventually came to New York in 1928. He had a column in the New York World three times a week. His book Twelve Against the Gods was an instant bestseller in 1929, when Ryall was also involved in overseeing a London production of his play Overture.

With a vested interest in the theater, it's no surprise then that William Bolitho would have been well aware of William Gillette, the foremost portrayer of Sherlock Holmes at the time.

In fact, in the bibliography of The Private Life of Sherlock Holmes, we find this citation for Bolitho's quote:

Could these two separate near-certainties have intersected? Could Smith have read Bolitho's piece and subconsciously used similar words and structure?

It's just as likely that Smith read the excerpt in Starrett's Private Life, as Smith and Starrett were regular correspondents in the 1930s and 1940s. In fact, it was Starrett who suggested that Smith get involved with the Baker Street Irregulars. To say that Smith held Starrett in high regard is an understatement. Hey, when someone dedicates the poem "221B" to you, what more is there to say?

As early as his high school years, his lifelong friend noted that Smith "had developed a retentive memory."

Like any good speechwriter, Smith's influences came from a variety of sources. We absorb what we read — and that in turn influences how we think and how we write. We like to think that Smith read Bolitho's essay and later Starrett's book, searing the vision into his brain.

And seven decades later, we're the beneficiaries of it.