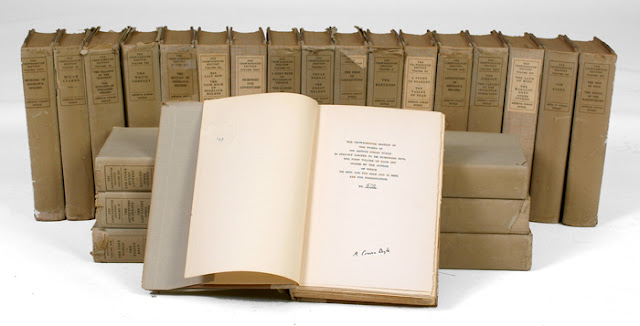 "You do occasionally find a carrion crow among the eagles," Holmes tells Watson in "Shoscombe Old Place," using an avian metaphor to describe the possibility that Sir Robert Norberton is a bad 'un. It's not a kind way to speak of crows, who by all informed accounts are highly intelligent and social creatures, but he said it and we have to deal with it.

Norberton is the only crow mentioned in the canonical stories, unless we count "the Crow Hill mine" referred to in The Valley of Fear. Or unless we are using a carefully selected edition of the stories, such as a version of the Doubleday Complete Sherlock Holmes published between 1930 and 1960. For there, behold what we find in chapter 3 of The Sign of Four, in the episode where Holmes and Watson accompany Mary Morstan to meet her mysterious benefactor:

"At the Lyceum Theatre the crows were already thick at the side-entrances."


The word should, of course, be "crowds," as it was in earlier editions and later ones as well. Newt and Lilian Williams, prominent figures now greatly missed by their friends in the Occupants of the Empty House in central Illinois, discovered this amusing typographical error in the 1970s. It launched them on a massive project to identify all the errors in the Doubleday text (and there are many of them) which they came to call The Great Crow Hunt.

My father, Donald A. Redmond, BSI, 2s ("Good Old Index"), dedicated his 1990 book about the printing of the Canon, Sherlock Holmes among the Pirates, to Newt and Lilian. And Les Klinger, compiling his Sherlock Holmes Reference Library volume for The Sign of Four, was able to consult the Williamses' much-marked-up copy of the Baring-Gould The Annotated Sherlock Holmes, now treasured in the Occupants' library under the name of The Annotated Annotated. It records:

"Peter Blau and Cameron Hollyer determined that the 'crows' appeared first in the Crowborough edition."

Crowborough was the village near the country home where Arthur Conan Doyle spent his final years; its name regrettably comes not from crows but from an old English word for yellow. The "Crowborough edition" of ACD's writings, in 24 volumes, was produced at the end of the author's life, in 1930, by Doubleday, who subsequently used some of the typesetting in the Complete SH — including the Crowborough crows.

Perhaps it was the memory of all these theatre-going crows that stimulated Canadian novelist Shane Peacock to make the birds play a significant role in his first "Boy Sherlock Holmes" novel, Eye of the Crow, which appeared in 2007.

So much for the crows who are birds. For the record, there is also Erasmus Crow, one of the victims in "The Adventure of the Reluctant Corpse" by Matthew J. Elliott, which appears in Volume III of the never-ending MX Book of New Sherlock Holmes Stories.

And many of us are acquainted with @221BCrow, who is an actual person, a writer and enthusiast of Victorian gay history well known in the Sherlockian twittersphere and the Pacific Northwest.

In a different category are the crows who are sounds rather than winged creatures. "Finally," Watson writes, again in The Sign of Four, "he [Holmes] broke out into a loud crow of delight." That's not the hoarse caw of the crow, but a totally unrelated sound that has been called by the same word at least since the first English translation of the Bible a thousand years ago, which contains the phrase "Se cocc crawe," the cock crew.

It is, in fact, the same noise referred to in "The Norwood Builder" as "Lestrade's little cock-a-doodle of victory". And that's a peculiarly interesting phrase because, if you look up "cock-a-doodle" in the Oxford English Dictionary, one of the quotations documenting the word's use comes from the 1853 novel Peg Woffington by Charles Reade. "It seemed not unlike a small cock-a-doodle-doo of general defiance," Reade wrote, in a book Conan Doyle must certainly have read (he was a great admirer of Reade's later and greater book The Cloister and the Hearth) and, it seems pretty clear, borrowed — and improved — for "The Norwood Builder".

Apart from crows, there are other corvids, notably ravens, which figure in The Hound of the Baskervilles as a pair of them "croaked loudly from a tor." Faced with Selden's body, Holmes observes that "We cannot leave it here to the foxes and the ravens." The Canon also twice refers to "raven" hair; in both instances the black tresses are borne by villains.

As far as I can tell, the tales make no mention of rooks, jackdaws, or magpies, and there is just one jay: Abe Slaney, captured at the end of "The Dancing Men," laments that Holmes tricked him with "a note which made me walk in here, like a jay, and give myself into your hands." I have no idea what that idiom is supposed to mean.

[Editor's note: the author lives not terribly far from the home of the Toronto Blue Jays.]