"a frame of white hair, and his precious volumes" [EMPT]

One look at the library of Otto Penzler's country home, and you'd think you're in a Barnes and Noble.

Otto's name is well-known in the world of detective and mystery fiction. He established Mysterious Press in the 1970s and opened The Mysterious Bookshop soon thereafter. Each January during the BSI Weekend, Otto hosts an open house at his store for Sherlockians.

We've chatted with Otto twice before on I Hear of Sherlock Everywhere: once in Episode 17 to talk about his collection and again in Episode 87 on the release of The Big Book of Sherlock Holmes Stories.

We were chatting with Otto during the BSI Weekend this year, and were surprised to learn that Otto's collection is up for sale (auction, really) over the next few years, beginning next week. Otto updates his Facebook page:


"The first sale has only about 300 books (of the 5,300 that Heritage Auctions will be selling over the next couple of years) but they are pretty terrific. If you would like to see some of the highlights of the American hard-boiled titles, plus a few other books, here's the link.

"The books will be exhibited at the Heritage New York office from noon Sunday [March 3] and on Monday and Tuesday, then the auction will be held at noon on Wednesday [March 6]. I'm deeply depressed about parting with my much-loved books but also looking forward to seeing what happens and what homes they will find. I was asked to write an introduction to the catalogue and a small piece for National Review, and have been extensively interviewed by a radio syndicate and the New York Post. The sale is a big deal in book collecting circles!"


In an interview with Nicholas Basbanes (author of A Gentle Madness and Among the Gently Mad) in Fine Books and Collections, Otto very correctly called his library of some 60,000 volumes “the greatest collection of mystery fiction you’ll find anywhere in the world.”

Otto isn't kidding. In browsing through the Heritage Auctions site of his collection, it's absolutely breathtaking. It certainly shows the discerning eye of an expert collector, with the attention to detail, multiple inscribed and signed first editions, and dust jackets galore.

Words alone can't describe what he's assembled. So, here are a few items from the current auction. Warm up your credit cards! 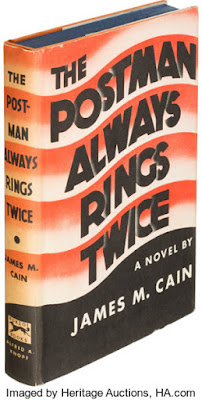 James M. Cain. The Postman Always Rings Twice. New York: Alfred A. Knopf, 1934. First edition, association copy, inscribed by the author: "To Mr. Samuel Marx / A tough baby to / do business with. / He earns his money / James M. Cain." Samuel Marx was an author, screenwriter, and producer who worked for Metro-Goldwyn-Mayer, the production company behind the 1946 adaptation starring Lana Turner and John Garfield. Full listing here. 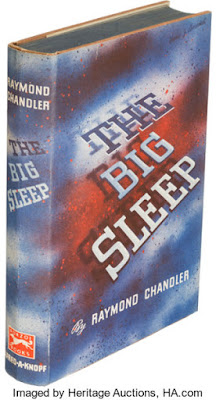 Raymond Chandler. The Big Sleep. New York: Alfred A. Knopf, 1939. First edition, signed by the author on the front free endpaper with the note: "With kindest regards." Donald A. Yates's copy with his ownership signature in ink. [Don Yates was a member of the Baker Street Irregulars and founder of the Greek Interpreters of Lansing.] Full listing here. 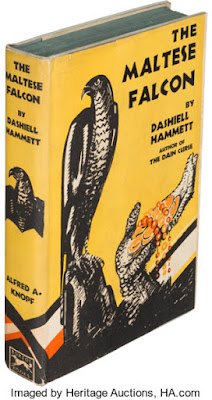 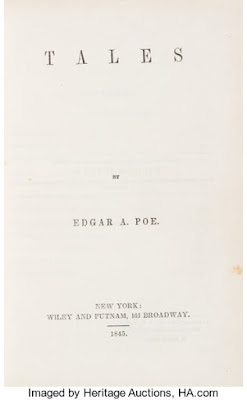 Edgar A[llan]. Poe. Tales. New York: Wiley & Putnam, 1845. First edition, first printing, with the copyright notice in four lines, and the imprints on the copyright page: "Stereotyped by T. B. Smith, 216 William Street, New York. H. Ludwig, Print." A Haycraft-Queen Cornerstone; Queen's Quorum 1 ("the first important book of detective fiction, the first and the greatest, the cornerstone of cornerstones in any readers' or collectors' guide, the highest of all highspots"). "The 1845 edition includes for the first time in book form all three Dupin stories - 'The Murders in the Rue Morgue,' 'The Mystery of Marie Roget,' and 'The Purloined Letter.' 'The Gold-Bug is also included, but not Poe's fourth detective story, Thou Art the Man'" (Queen's Quorum). Full listing here. 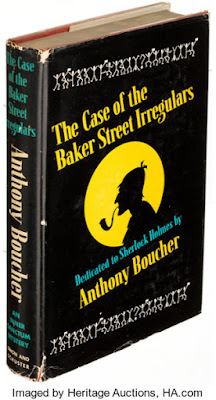 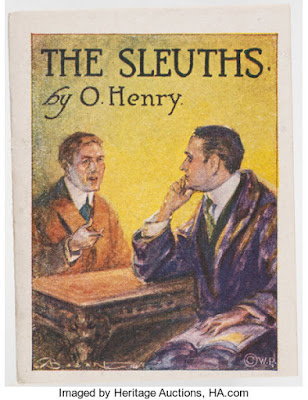 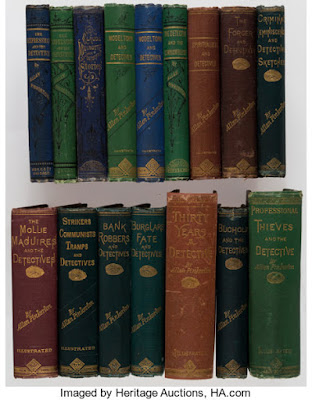 
And while the following don't specify that they're from Otto's collection, a search for "Sherlock Holmes" in the March 6 Rare Books Signature Auction Featuring The Otto Penzler Collection of Mystery Fiction, Part One yields some astonishing results. 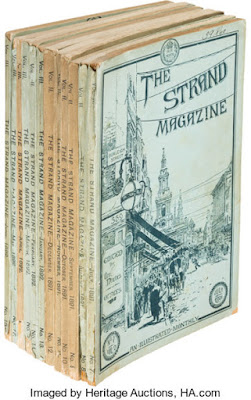 All 12 stories that appeared in The Adventures of Sherlock Holmes, in their original monthly serial appearance in The Strand Magazine, July 1891 - June 1892. Full listing here. 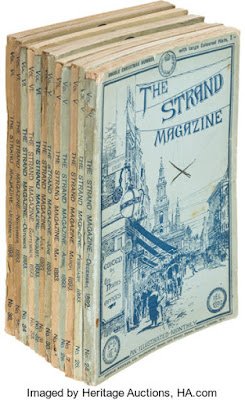 While you're at it, why not add all twelve stories from The Memoirs of Sherlock Holmes? Original appearance in The Strand Magazine, December 1892 - December 1893. Full listing here. 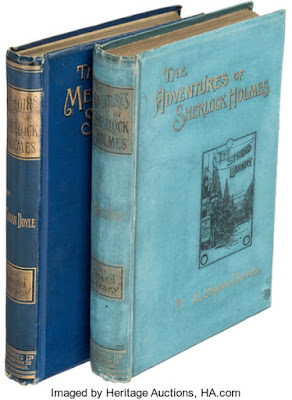 Both of these collections can be had as book form, in their first editions published by George Newnes, 1892 and 1894, respectively. Full listing here. 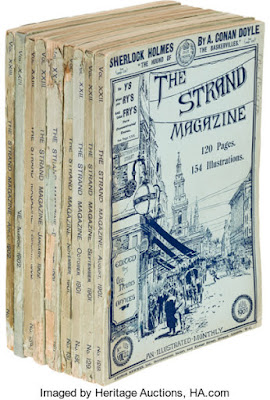 Of course, Holmes had a brief hiatus (or an interminably long one, from the public's perspective) before returning in The Hound of the Baskervilles, as serialized in nine issues of The Strand Magazine, August 1901 - April 1902. Full listing here. 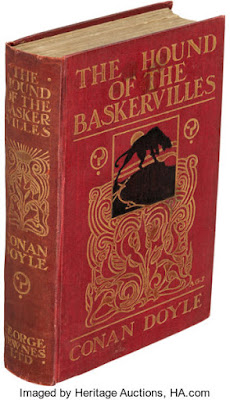 If you'd prefer The Hound of the Baskervilles in book form, Heritage can accommodate that as well. Here's the first edition, in its classic red cover with the silhouette of the hound on the cover. Full listing here. 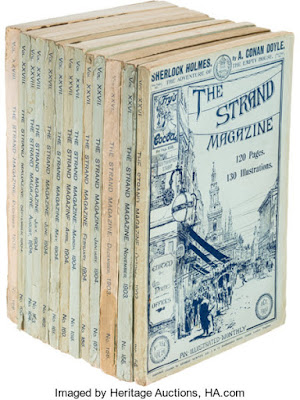 The Return of Sherlock Holmes officially occurred in the pages of The Strand Magazine from October 1903 - December 1904, in thirteen issues. Full listing here. 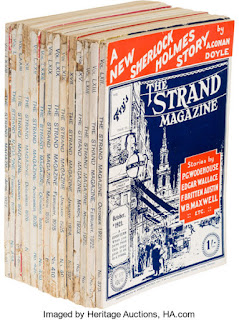 It took 14 issues over six years to complete the collection known as The Case-Book of Sherlock Holmes in The Strand Magazine. Full listing here.


You can pick your jaw up off of the floor now. You'll need it for the live auction.