"A point which involves the Navy, India, Canada and the bimetallic question" [BRUC] 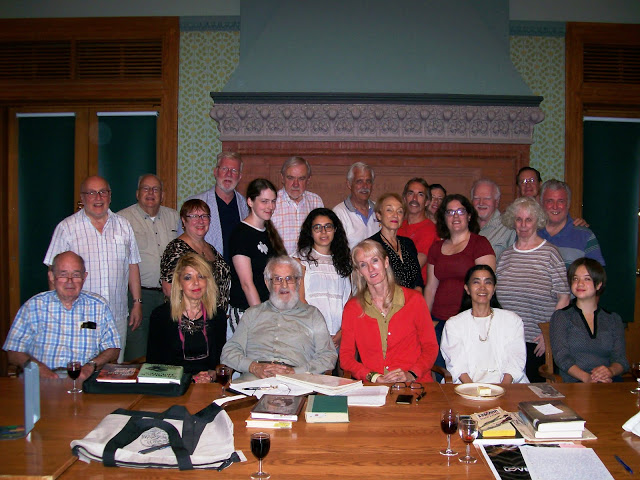 I write these notes aboard a train, heading home after a quick trip to Montréal to attend a meeting of the Bimetallic Question, Canada's second oldest Sherlockian society (founded 1979). I've been to two of the Question's weekend colloquia and once a social gathering, but this is the first time I've ever attended a regular meeting of what turns out to be the nearest Sherlockian group to Carleton Place.

Unsurprisingly, it was a terrific evening, with Sherlockian erudition, jokes, digressions, a daunting quiz, old-timers, newcomers, and appropriate beverages: sherry or port at $1 a glass for use in toasting.

Among the old-timers (in a group of two dozen people altogether) was former society president Patrick Campbell, who proudly announced that he is coming up to his 94th birthday. Among the newcomers: a young woman who confided that she has quietly enjoyed the Sherlock Holmes stories for years, but got more serious about them after watching the BBC's Sherlock, and found out about the society through the library branch where its meetings are held.

The venue is the dignified Westmount Public Library, a jewel of one of Montréal's wealthier (and English-speaking) suburbs. The room where we met has windows that are elegantly engraved with the names of classic children's authors – no doubt it was the children's department at one time. Regrettably Arthur Conan Doyle (writing for "the man who is yet half a boy") was not one of those commemorated.

The story of the evening was "The Lion's Mane", which was cheerfully agreed to be not one of the best, particularly with that feeble and erroneous deduction about the dry towel. It does have its points of interest, though, particularly the news that Sherlock Holmes was by habit and inclination a swimmer. We wondered where he practiced his sport, other than of course the Reichenbach Falls.

A very civilized and cordial evening, in short – which is just what one would expect from Sherlockians pretty much anywhere. I look forward to my next visit.