Holmes Away From Home: Tales From the Great Hiatus

"had finally been called away" [BLUE] 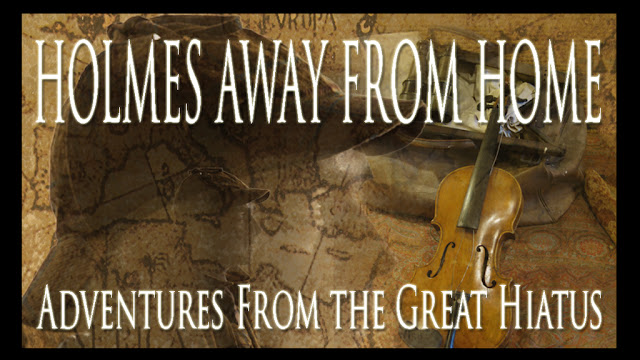 "The Great Hiatus!" Those three words conjure wonderful and powerful images in the minds of all Sherlockians," writes author and editor David Marcum in Holmes Away From Home: Tales From the Great Hiatus, a two volume collection of stories where authors speculate on the whereabouts of Holmes from Reichenbach Day, May 4th 1891 til his return on April 5th, 1894. While Doyle did give us a somewhat brief explanation of Holmes's activities during those missing three years, it has been up to fans of the great detective to fill in the gaps.

In "The Adventure of the Empty House," Holmes explains to Watson how he spent his time after surviving his fight with Professor Moriarty:


"I travelled for two years in Tibet, therefore, and amused myself by visiting Lhassa, and spending some days with the head Llama. You may have read of the remarkable explorations of a Norwegian named Sigerson, but I am sure that it never occurred to you that you were receiving news of your friend. I then passed through Persia, looked in at Mecca, and paid a short but interesting visit to the Khalifa at Khartoum, the results of which I have communicated to the Foreign Office. Returning to France, I spent some months in a research into the coal-tar derivatives, which I conducted in a laboratory at Montpellier, in the South of France."

Holmes then returns to London. But is that all there is to the story?  A paragraph seems an awfully brief way to sum up the whereabouts of the great detective for three years of his life. This "was a period of nearly three whole years, from May 1891 to April 1894 – that’s over a thousand days! The tiny amount of information related in “The Empty House” is clearly not the whole story," argues Marcum in the Holmes Away from Home introduction. This argument led to the two volume anthology.


Where was Holmes during those missing years?

There is a general consensus among pastiche writers. After his victory at the Reichenbach Falls, Holmes returns to London briefly in disguise, then travels to Europe, takes passage by sea to India, and spends the winter in Tibet. Holmes leaves Tibet in the spring of 1892 until his return to London in 1894, Holmes spends his time on secret missions guided by his brother. These missions take Holmes to the Middle and Far East, to the North American continent, and then back to Europe.

If this consensus already exists then why the need for a new Hiatus collection? Editor David Marcum himself shares his logic:


"The most important reason is that there can never be enough traditional Sherlock Holmes adventures. We find out some more about what Holmes did in Europe before he set out for Tibet, and how Watson filled some of his time back in London. Details of Holmes’s missions in India and traveling in the Middle East are revealed, some with long-reaching consequences. Details of more than one trip to the United States are addressed, with visits to places that have previously been unidentified in Holmes’s itinerary. Finally, we learn what he was doing in the days and even hours leading up to the events of 'The Empty House.' If you’ve already journeyed with Holmes on some of his Hiatus investigations, you’ll appreciate the chance to do so again. And if this is your first time setting out on the journey with him, you couldn’t be in better hands."


Holmes Away From Home is a Kickstarter-backed project, open until November 25th.