We've lost another Sherlock Holmes. Fritz Weaver, a Tony Award-winning actor, has passed away at 90.

His career spanned television, stage and film and the world knew him best in his turn in the 1978 mini-series Holocaust, as an unstable military man in the 1964 film Fail Safe, and as an autocratic leader who faces an ironic twist in "The Obsolete Man" episode of The Twilight Zone.

But Sherlockians everywhere fondly recall him playing Sherlock Holmes in the 1965 play "Baker Street: A Musical Adventure of Sherlock Holmes." His Watson was played by Peter Sallis, Moriarty by Martin Gabel and Irene Adler was portrayed by Inga Swensen.

We were lucky enough to have interviewed Fritz Weaver on I Hear of Sherlock Everywhere in Episode 26: A Musical Stroll Down Baker Street. You can listen to it here:

In the interview, we played clips of some of the Coopersmith / Jessel songs for Mr. Weaver, including "I Shall Miss You," "Cold, Clear World," and "Pursuit." He was transported in his recollections and thoroughly enjoyed the memories. 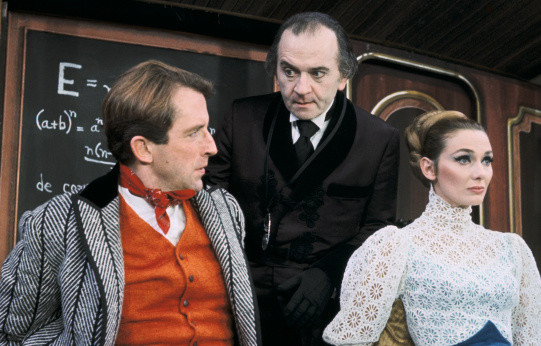 We extend our condolences to his family and mourn the passing of an underappreciated Sherlock Holmes.