The Symmetry of Sherlock

"a little short and thick for symmetry" [NAVA] 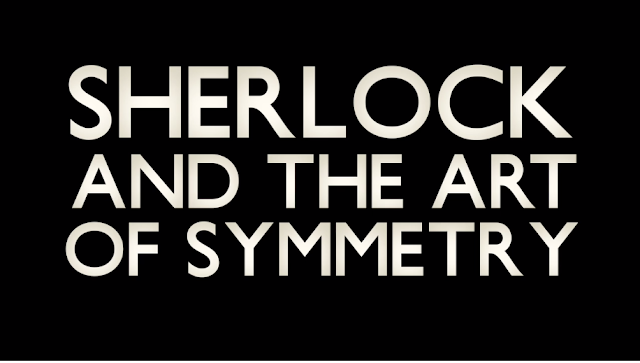 Sherlock Holmes said, "Art in the blood is liable to take the strangest forms." And with his penchant for noticing details that others fail to notice, one might wonder if his tendencies border on the obsessive.

Take, for example, the classic scene in which Holmes asked Watson about a very common architectural feature in Baker Street, in this scene, described by Watson:


I could not help laughing at the ease with which he explained his process of deduction. "When I hear you give your reasons," I remarked," the thing always appears to me to be so ridiculously simple that I could easily do it myself, though at each successive instance of your reasoning I am baffled, until you explain your process. And yet I believe that my eyes are as good as yours."
"Quite so," he answered, lighting a cigarette, and throwing himself down into an armchair. "You see, but you do not observe. The distinction is clear. For example, you have frequently seen the steps which lead up from the hall to this room."
"Frequently."
"How often?"
"Well, some hundreds of times."
"Then how many are there?"
"How many! I don't know."
"Quite so! You have not observed. And yet you have seen. That is just my point. Now, I know that there are seventeen steps, because I have both seen and observed."

That level of detail and minutiae — a level that escapes the average person — is what sets Sherlock Holmes apart.

So when Steve Lawes, the principal cinematographer for the series, had an opportunity, he was equally as obsessive about the details of some of his shots. In particular, Celia Gómez determined that a number of shots were arranged in a perfectly symmetrical fashion. She created a short video (embedded below) that highlights her astute observations.


It's quite clever, and the cinematography reflects the nature of Holmes's ordered mind. What do you think?

Tip of the deerstalker: We originally discovered this video via Bob Katz, BSI ("Dr. Anstruther") on Facebook, where he shared a link to an article on Entertainment Weekly.