"...with the same feverish animation as before" [DYIN] 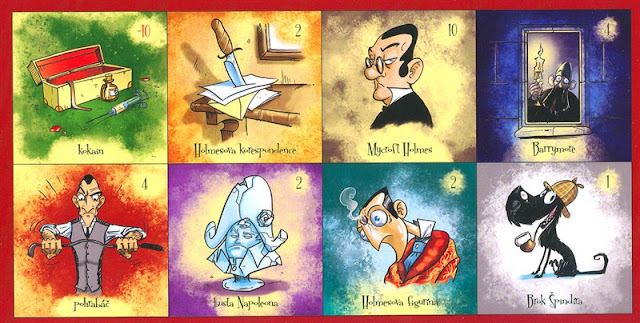 Czech artist Petr Kopl's adaptations of "A Scandal In Bohemia" and The Hound of the Baskervilles (both translated by Paul and Jana Simpson and released by MX Publishing) are a rare breed of pastiche: integrating the Canon and other Victorian-era references into a great mix that make for an astoundingly fun read.

One of Kopl's strengths in both novels is his reliance on the original Sherlock Holmes stories to guide his storytelling, making these novels feel very Holmesian in spirit. (It's no wonder that the Czech Society of Sherlock Holmes granted him an honorary membership in 2000). His adaptation of A Scandal in Bohemia manages to integrate "The Adventure of the Speckled Band" seamlessly, making it part of the overall story without any artificiality. Although seemingly the most retold Holmes tale in the canon, Kopl's adaptation of The Hound of the Baskervilles manages a pitch-perfect atmosphere of brooding horror and malevolence.

What makes both of Kopl's Holmes adaptations work is a strong sense of wit. Despite the slightly exaggerated quality of his art, Kopl never plays his Holmes and Watson strictly for laughs...although there are some legitimately laugh-out-loud moments. Kopl also integrates many clever references to other Victorian literary figures such as Phineas Fogg and a familiar character who got on the wrong train. (To say more would be spoiling). There is only one false note - an appearance by a more fantastic Victorian-era character - but otherwise these are spectacular works of Sherlockian lore.

(Note: Kopl indicates that these two novels are part of a larger series narrative; however, both of these work very well as stand-alone reads. The third in the series—not reviewed for this article—is "The Final Problem").

With many artists and writers crafting graphic novel adaptations of the canon, there is a diverse range of works for Sherlockian scholars and fans to enjoy. Petr Kopl's "A Scandal In Bohemia" and The Hound of the Baskervilles are excellent starting points).

All three of these Holmesian adaptations are available from MX Publishing.

As a bonus, here's a video of Petr Kopl at work on a portrait of Sherlock Holmes.