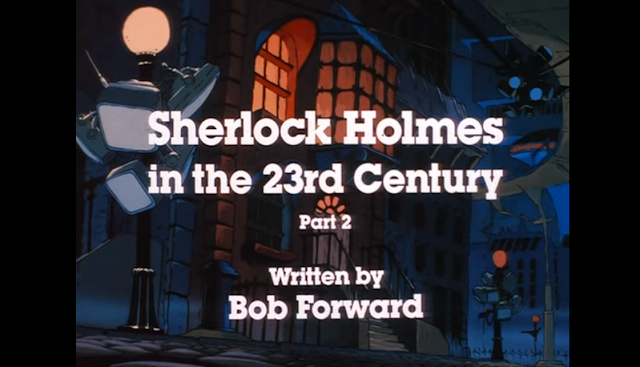 Many Sherlockians are aware of Sherlock Holmes in the 22nd Century, an animated series that aired in the United States from 1999-2000. But how many would be aware of Sherlock Holmes in the 23rd Century, a show planned more than a decade before, in 1988? It all began with space cowboy and would have been brought to you by the creative team behind He-Man.

Filmation Studios was known in the '60s, '70s and '80s for its massive animated output. Its cartoons included DC superheroes, Archie comics, Fat Albert, Star Trek, Gilligan’s Island, Tom and Jerry, He-Man and She-Ra. But its tie to the Sherlockian world comes from its last animated series, Bravestarr. 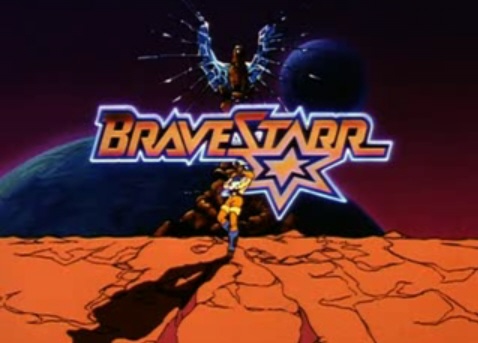 Bravestarr was a space western set on the planet of New Texas in the 23rd century, and aired in syndication from 1987 to 1988. Marshal Bravestarr, the titular character of the series, kept peace and order on his planet in episodic installments.

One notable exception to this format is the two-part episode, “Sherlock Holmes in the 23rd Century,” meant to spin off as its own show. The first episode opens with the standard Bravestarr theme song, and then takes the viewer to 1893 where Holmes and Professor Moriarty are battling atop the Reichenbach Falls during a brutal lightning storm.


But it ends differently this time.  As Watson watches from below, Moriarty pushes Holmes off the cliff!  Luckily, a time warp opens and Holmes is transported to the year 2249.  Holmes crashes through the roof of a futuristic hansom cab and is taken to the nearest hospital by Dr. Wt’sn, an alien of substantial strength.

Holmes adjusts quickly to his new surroundings, and shows a strong knowledge of astronomy, specifically the constellation Rigel. Wt’sn equips Holmes with a suitably futuristic jacket and deerstalker while Holmes tries to get used to having a scanner pipe and his newfound power to blast lightning bolts from his hands. The duo moves through New London on their way to 221B Baker Street to meet a Scotland Yard agent descended from the Holmes family, Ms. Mycroft Holmes (and her very large gun).


Baker Street has been turned into a Sherlock Holmes Museum, where Marshal Bravestarr finally makes his entrance to the story. Bravestarr is tracking down a lost alien boy who was aboard a hijacked space freighter and comes to the great detective for help. During their interview, Holmes is kidnapped but is saved by three street urchins and their dog, Baskerville. Chief Inspector Kitty Lestrade comes to take the would-be kidnapper away, and our heroes find that he was working for a larger foe. While tracking down this new villain, Holmes, Wt’sn, Bravestarr and Mycroft become trapped in a dungeon, but our heroes escape and find the lost alien child. 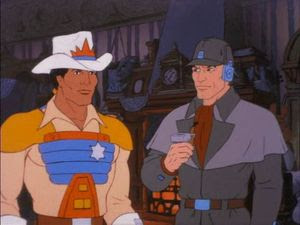 And then Moriarty shows up.

I won’t spoil the second half of this story, but things escalate quickly and include the Eiffel Tower and a futuristic punk rock band. You can watch part two of the episode on YouTube or own the episodes on DVD from Amazon.

Of course, there never was a Sherlock Holmes in the 23rd Century series. Filmation was in financial trouble at this point. It was bought by the cosmetics company L’Oreal, and eventually shuttered, with no new series made after Bravestarr.

But one could wonder what the series would have looked like. These two episodes spent a lot of time world building. Sherlock Holmes is quickly outfitted for the future, with his new powers, gadget and sidekick. An overarching foe is established in Professor Moriarty, and one assumes he would have a new scheme each week. New London is built up with street urchins to take the place of the Baker Street Irregulars, and Mycroft Holmes and Kitty Lestrade take the place of the Victorian Lestrade and Gregson. It wouldn’t be a far stretch to assume that Holmes and Wt’sn would take up residence in the Sherlock Holmes museum, and the finicky curator would take the place of Holmes’ previous landlady (I wouldn’t be surprised if the caretaker even turned out to be named Hudson).

But we will never know. It’s a mystery what could have been.