Review — The R.X. Problem (The Adventures of Watts and Sherlock Book 1)

"in which the future city was sketched out" [STUD] 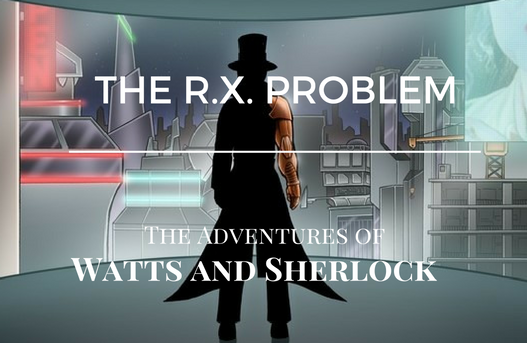 Sherlock Holmes and science-fiction have a surprisingly good relationship. Many great science-fiction authors from Harlan Ellison to Isaac Asimov to Jack McDevitt have written their own Holmes scholarship and pastiches. Perhaps because, unlike fantasy, science-fiction must be grounded in the realm of logic and possibility, it is much easier to see Holmes dealing with mechanical menaces than fairies or gnomes.  Spooks need not apply, but computers are another matter.  Which brings us to Katie Magnusson's delightful cyberpunk Holmes story collection, The R.X. Problem (The Adventures of Watts and Sherlock, Book 1).

In this book which technically is a short story collection but has a narrative thread connecting all of the tales together, we have a Holmesian character (not Sherlock Holmes, though he is inspired  by the great detective) who becomes roommates with Dr. Watts, a wounded veteran who now has a portion of his body replaced with cybernetics — much better treatment than poor Dr. Watson received for his injury from Maiwand. After being discharged from combat, Watts must find a roommate, and he is connected with the mysterious Sherlock, a consulting detective from a Historic Colony (a village where people still live as if it is the Victorian time period), who now resides in the city. 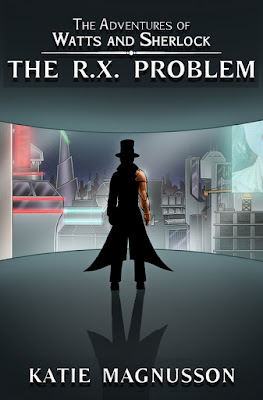 While the beginning of the story is a futuristic revision of the introductory chapters of A Study in Scarlet, once the mysteries begin, we are in all new adventures. A smart move on Ms. Magnusson's part. She sprinkles in connections to Doyle's adventures such as adding in Irregulars and a Lestrade stand-in with Detective Murphy, but the vision of this dystopian future in which corporations run what remains of the world and a vast wasteland is all that's left of the suburbs is entirely her own creation. We have traditional Holmes adventures grounded in this bleak futuristic world which makes for a great read. The overarching mystery connecting the stories together deals with a new highly addictive street drug known as "sunshine" and its connection to the supposedly benevolent R.X. corporation.

The writing is quite good and rightly focuses on the development of the friendship between the two men. Sherlock is very much like Sherlock Holmes. When reading his voice, you can feel the Doyle connection. Watts is quite different from Dr. Watson. He is a gruff, no nonsense doctor jaded from his battle experience. I found his voice to be more like that of characters from Chandler than characters from Doyle, and that is not a criticism. He makes a nice bridge between the two worlds, save with one exception. At one point, Watts uses a vulgar expletive. It isn't necessarily out of character, but it did not seem to fit the book, and I almost saw Dr. Watson taking Watts to task for using such a term in his name.

My only other complaint is one that fits with most other cyberpunk books — the technology. It is difficult to find the right footing in a futuristic world and while some of the changes such as easily getting an arm replacement are visionary, they are juxtaposed with standard technology that feels like it too should be more advanced. In a world where people can literally plug into the Internet via connections in their arms, they are still using cell phones and sending text messages.  In a world where people can get a mechanical leg replacement at a local hospital or even in the black market, police still have to send DNA evidence away to a lab to get tested. It is a minor complaint, but it is one that took me out of the stories on a few occasions. The writing is of such high quality, however, that it did not take me long to be rapt in the tales again.

On a different point, the story I found to be the absolute best in the collection was also the most traditional. "A Murder in the Colony," has Sherlock returning to his home historic colony and solving a murder that his father supposedly committed. It is not completely traditional. The new technology is important to the tale, but for the most part, the characters must only use what was available in the Victorian time period as well as their wits. The relationship between Sherlock and his parents is strained and we get glimpse into what made the man become the futuristic consulting detective.  Even if you are not a fan of anything non-traditional with Sherlock Holmes, I still recommend reading this collection if only for this story.  It is truly exceptional.

I look forward to Katie Magnusson's next Watts and Holmes collection (the book ends with a sneak peek at the second volume), and I also hope she writes a traditional collection of Holmes tales as well.  She is a talented writer and can easily write for both worlds.

The R. X. Problem (The Adventures of Watts and Holmes Book 1) is available as a paperback and  an ebook on Amazon.  You can also visit the series' website.