On Friendship and Possibilities

"I am much obliged to you for bringing us together." [STUD] 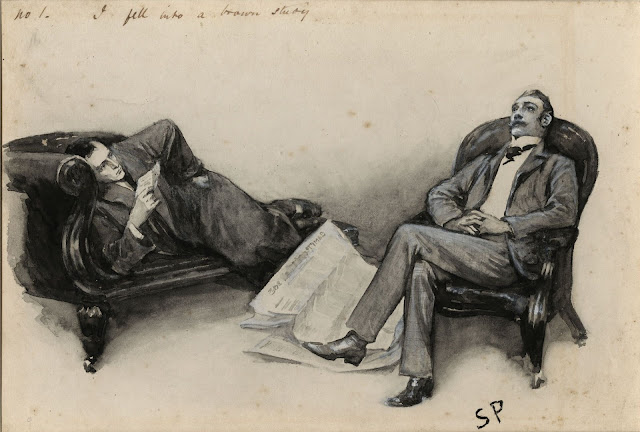 One of the downsides of living in the Midwest is the dearth of regular (irregular?) Sherlockian get-togethers. For those of us living in smaller cities and towns, it seems as if our counterparts in large urban areas—and particularly on the East Coast—spend their days running from event to event, while we're staring out at the cornfields hoping that this is the month we'll be able to make an hours-long trek to see people we can't see often enough.

So it is that most of my Sherlockian interactions happen via the Internet. I've been thinking some about an online conversation I had with a few Sherlockian friends a few nights back and, musing it over, it's dawned on me why I love being part of this community.

For most of my life—maybe even all of it—I've been very concerned with "doing the right thing"...but not so concerned with following rules. Yeah, yeah, I know we have to have them, and I know they apply to me, but basically, I'm not a fan. To me, life, and goodness and right are greater than this.

However, most of life doesn't work that way. As a Christian, I do have to be concerned about doctrine; it's God, it matters, and it matters even when I wish parts of it were different. I obey the speed limit (at least, after that meeting with Trooper Curtis on US 40). I pay taxes (and we actually pay—no refunds). I get my oil changed, queue where the arrow is, and if I don't turn off my cell phone in the movies, I don't talk on it, either. Our kids have structure, our utilities are on, and with the exception of the occasional small rebellion, you'd probably never know that, while I look like a devout church-going middle-aged wife and mom, I'm—internally—more of a pragmatic bohemian who just wants people to be happy as long as they're not hurting anyone else.

When I first entered the Sherlockian world, I was, like many new converts, really, really concerned with the Canon. It wasn't long, however, before I saw that the world of 221B was so, so much more.

Here, if you want to memorize all 56 stories and 4 novels, you can do that, and we will all be very, very impressed. But if you want to devote the majority of your efforts to rehabilitating the image of Matt Frewer's Sherlock Holmes, you can do that, too. Quite a few of us adore Edward Hardwicke's Watson...but if you're planning to cosplay H. Marion Crawford's, you just go on with your bad self.

I love Sherlock Series 3 with every fiber of my being. It could be that Steven Doyle doesn't feel the same way....not sure about that... but we like and respect each other and he throws great parties. Vincent Wright and I don't agree with each other on God—but we're friends, and he has been a wonderful mentor and research buddy. I know all of you can think of your own examples.

Really (unless you're hurting others) as a Sherlockian, you can be who you are, and find that you're welcomed, appreciated, and accepted for just that. And when that happens, something else tends to happen, too: people blossom—often in ways that their regular lives don't encourage. They try new things. They give toasts. They paint. They write. They wear outrageous clothes. They leave their houses and fly on planes. They become leaders. They host events. They write books with their best friends. Some of them even marry each other. Just as an invalided army doctor and his weird, anti-social (but brilliant) best friend could become a famous writer and the world's foremost detective, Sherlockian men and women find, in 1895, ways to be themselves in ways they may never have imagined possible.

Today, as part of my podcast exercise program (6 lbs down so far, thank you), I happened to listen to IHOSE Episode 89: The Adventuresses of Sherlock Holmes, and, as Mr. Stix read out the names of people who should have been part of the BSI ages ago — "righting old wrongs" — it struck me that, any time we dismiss others for not being quite what we think they should be, we not only deny them a chance to become far more, we miss out on all the good they have to offer. How many of us would have moved out of Baker Street within the first several weeks? But had John H. Watson, MD, done that—weirded out by all those strange people in the sitting room—he would have missed out on the best part of his life.