"Saints have never flourished in those parts" [HOUN] 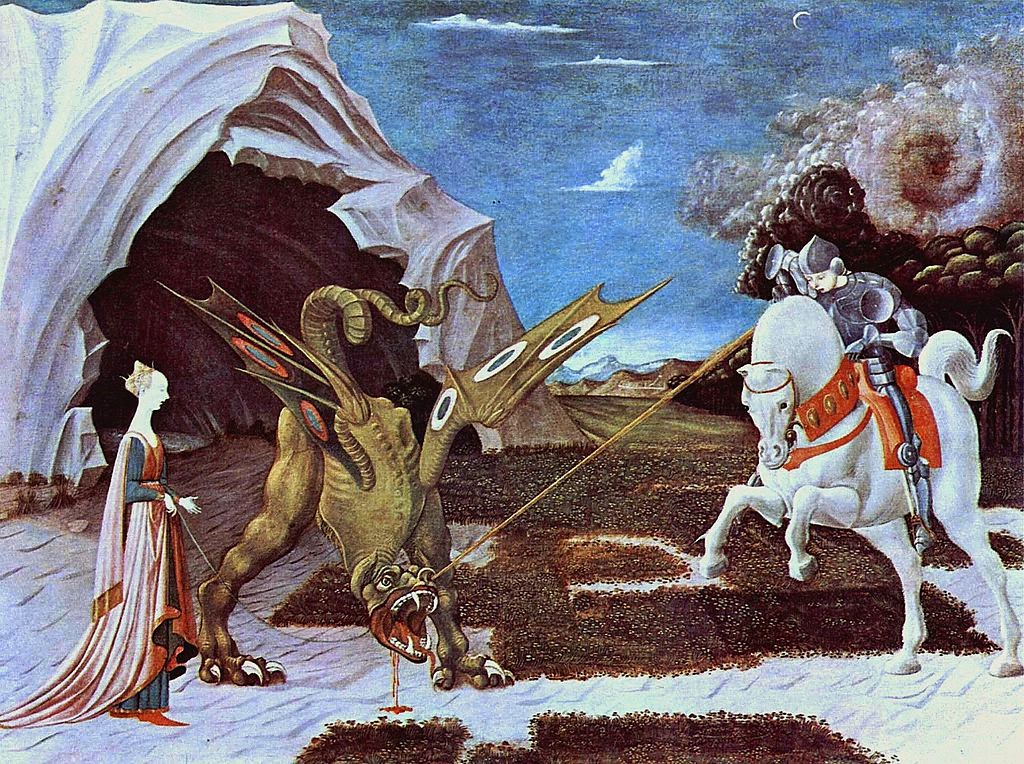 Everybody knows of St. Patrick's Day on March 17, honoring the patron saint of Ireland, but England's patron saint, George, marks his Day today, April 23, with far less press. (The other two components of the United Kingdom also have saints: Scotland's St. Andrew is honored on November 30, Wales's St. David on March 1.)

St. George's Day is not an English holiday, and the St. George's Cross, red on a white background, is associated mostly with soccer fans, though it does appear as one component of the Union Jack. St. George is, however, a significant figure in English folklore and literature, so it's no surprise that he makes a few appearances in the tales of Sherlock Holmes.

Three explicit mentions of him have, as one might expect, a religious connection.

But it's also St. George who is meant when Sherlock Holmes in "The Priory School" and "The Six Napoleons" swears "By George!" In fact the same oath is used ten times in canonical stories — twice by Holmes, twice by Lestrade, twice by Carruthers of "The Solitary Cyclist", and once each by Stapleton, Inspector Martin, Stanley Hopkins, and Leverton, hero of the Long Island cave mystery, in "The Red Circle", who is certainly no Englishman. These incidents all come in the second half of the canon. It can be assumed that "By George!" is a euphemistic substitution for "By God!" but even so it was strong language, apparently not suitable for use in any of the Holmes tales published before the twentieth century.


St. George himself was no Englishman either, but a Roman soldier, born in Palestine in the third century AD. The principal legend about his life is that he killed a (presumably diabolical) dragon, rescuing a maiden in the process. On the strength of that feat of heroism he is the patron saint not only of England but of Portugal, Bulgaria, Ethiopia, and dozens of other places, not to mention the Scout movement and herpes sufferers. In his honor, April 23 is a holiday in the Canadian province of Newfoundland and Labrador.

And in his honour, according to one recent count, England has 104 pubs called the "George and Dragon". None of them figures in the Sherlock Holmes tales, although Holmes and Watson stay at the "Green Dragon," perhaps representing the creature St. George slew, when they leave London to investigate the affair of "Shoscombe Old Place". Charles Augustus Milverton's safe is a metaphorical dragon, "this green and gold monster, the dragon which held in its maw the reputation of many fair ladies," and in that case Holmes himself stands in for St. George when he conquers the monster.

A very familiar reference to England's patron saint comes in the play Henry V, whose author, William Shakespeare, happens to mark his birthday on St. George's Day. He provides a brilliant speech for the young king, rallying his troops before the battle of Agincourt, which was fought exactly 600 years ago this October. "Follow your spirit," Henry (or Harry) urges them, "and upon this charge, Cry — God for Harry! England and Saint George!" Just a few words earlier, what does Henry tell his soldiers? All Sherlockians know that clarion call, which Sherlock Holmes quotes as he rouses Watson in "The Abbey Grange":