The First Appearance of Sherlock Holmes on The Muppet Show 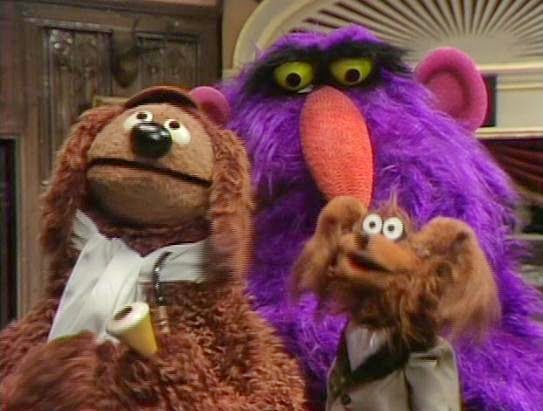 We came of age at a time when Saturday evenings at home meant a combination of The Love Boat and Fantasy Island, preceded by The Muppet Show. The format of the show was essentially your standard variety show: a guest star each week, musical numbers, comedy sketches and backstage interactions in front of a "live" audience.

In this case, we were pleased to find a sketch from Season 1, Episode 3 with guest star Joel Grey (available on DVD: The Muppet Show Season 1). The piece was titled "Sherlock Holmes and the Case of the Disappearing Clues," starring Rowlf as Sherlock Holmes, Baskerville as Watson, Miss Piggy as the maid and a rather imposing purple monster named Gorgon Heap.

The reason we had never seen it before is because when the program (or more appropriately, programme) aired in the UK, there were fewer commercial spots, so additional footage had to be shot. Such two-minute shorts were shown in the UK but not in the United States.

And a word or two about Baskerville the Hound. Obviously, his name was inspired by The Hound of the Baskervilles, but his personality was anything but vicious. This cute little Afghan hound originally appeared with Rowlf in a series of commercials for Purina Dog Chow in 1962 in Canada (which are available on The Muppet Show Season 3 on DVD), and then in the first season of Sesame Street. The above episode is his first appearance on The Muppet Show, and he made two other appearances with Rowlf in Season 1, but those were UK spots as well. Baskerville also showed up numerous times in Season 2. (Source: Muppet Wiki)

If you'd like to satisfy your collector's mania, Baskerville, Rowlf and the rest of the gang can be seen in The Muppet Show on DVD. (Amazon.com | Amazon.co.uk)