"the poetic and contemplative mood which occasionally predominated in him" [REDH] 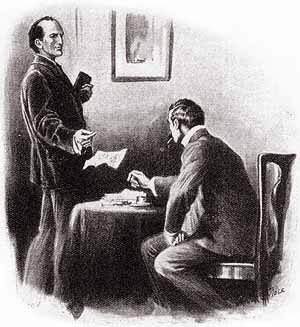 In the early- to mid-Forties, Edgar W. Smith, the Buttons-cum-Commissionaire of the Baker Street Irregulars, and the first editor of The Baker Street Journal, published a short booklet. Titled A Lauristen Garden of Verses, it was printed by the Pamphlet House of Summit, New Jersey and bore the authorship of Helene Yuhasova (who for many years was thought to be a pseudonym of Edgar. We found out the truth in Episode 75 with Sonia Fetherston).

The thin volume contained six Sherlockian sonnets and a ballade, and we thought we would share one of them here.

You said of me what Plato said of him
Who took the hemlock at his soul's behest:
That I was paragon and paradigm --
Of all you've known, the wisest and best.
Discernment such as that shows goodness, too,
And certifies a wisdom long concealed --
My wisdom lay, perhaps, in choosing you
To stand beside me as my foil and shield.

For you are Britain's apotheosis;
The summum bonum of the bulldog breed;
A benison epitomized in this:
That strength and valour flourish in your deed...
Come, Watson, com! The game's afoot and free:
The world has need of men like you -- and me.

You can learn more about Edgar Smith and the early days of the Baker Street Irregulars by picking up a copy of any of the volumes of the Baker Street Irregulars Archival Series. At this time, the only volumes that are still available in print and available from the BSI are Vols. 4 and 5, but you may have luck with AbeBooks or eBay if you're looking for one of the first three volumes.

To read of the history of this revered organization is to know its founders and leading lights, whose great imagination and personalities we have to thank for the BSI at 80 years.