"As to my own case, I am ready to give you any information which may assist you in forming an opinion."  [NOBL] 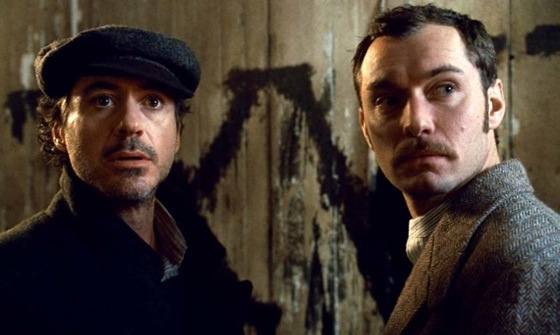 Sir Ian McKellen as Sherlock Holmes, I Hear of Sherlock Everywhere gives free reign to Brad Keefauver of Sherlock Peoria, two bloggers discuss the importance and merits of A Study In Scarlet, Ray Betzner shares his thoughts on Vincent Starrett’s mystery novel Murder in Peking, Dan Andriacco discusses life lessons learned from Holmes, Alistair Duncan looks at four ages of Conan Doyle, Jon Stewart pretends to be Sherlock Holmes for 3 seconds, The Friends of the Sherlock Holmes Collections award Don Yates for his essay “Sherlockian Memories” and The Priory Scholars of NYC gear-up for their “Back to School 2013” meeting, and more in this week's Friday Sherlock Links Compendium by Matt Laffey.

The Telegraph announced that Sir Ian McKellen (i.e. that guy who also played Magneto and Gandalf) will play Sherlock Holmes in a film adaptation of a novel by Mitch Cullin called A Slight Trick of the Mind (2005). Wow, what?! I have to admit that I've never read Cullin's novel that's set in "1947, and the long-retired Sherlock Holmes, now 93, lives in a remote Sussex farmhouse with his housekeeper and her young son. He tends to his bees, writes in his journal, and grapples with the diminishing powers of his mind. But in the twilight of his life, as people continue to look to him for answers, Holmes revisits a case that may provide him with answers of his own to questions he didn’t even know he was asking - about life, about love, and about the limits of the mind’s ability to know." The New York Times gave Cullin's novel (his seventh at the time) a very good review back in 2005: "The strange, silent image of an old man staring into an apiary governs the entirety of A Slight Trick of the Mind. "When you look upon me," Holmes tells his grief-stricken housekeeper, "I believe you find a man incapable of feeling. . . . If I choose to speak at any length, I usually talk of the creatures." Talking exclusively "of the creatures," though, doesn't make human beings disappear; it only makes their demands more desperate. As the conclusion of this beautiful novel makes plain, lives aren't like cases or, for that matter, like narratives. They are never solved or resolved: they just one day come to an end."

Unless filming goes terribly wrong, a film version of A Slight Trick of the Mind has the potential to emotionally and intellectually probe the depths of the Great Detective in the Winter of his life. On Friday, Sir Ian himself via his Twitter @IanMcKellen had this to say about the news:


discussed [Keefauver's] first meeting with Sherlock Holmes, noting that it was far from typical. It was theatrical in nature, but you'll have to listen to hear the exact work that captured Brad's attention. We were then off and running into the sci-fi world of Isaac Asimov, Robert Heinlein and others, with Brad openly admitting his Trekkie origins (not that there's anything wrong with that).

After Mr Keefauver's exit various current Sherlockian news items are discussed, with the show concluding on "a reading of the Editor's Gas-Lamp, this time selecting "One Advocating Sherlock Holmes" from the March 1987 issue (Vol. 37, No. 1) of the Baker Street Journal. While the topic and some of the pronouncements may be controversial, we like to think that we found some common ground in it." Another excellent episode from two of the hardest working guys in the Sherlockian world. If you don't already subscribe to IHOSE, you can do so either through their IHOSE website or via iTunes.

Bauman Rare Books posted a succinct history of the story behind the first Sherlock Holmes novel A Study In Scarlet, a history familiar to anyone versed in the Canon but essential knowledge for those at the onset of their Canonical explorations. Published originally in the 1887 issue of Beeton's Christmas Annual, as an objets de Littérature it is now "a rare collectible and considered the most expensive magazine in the world, with a Beeton's 1887 selling for $156,000 at Sotheby's in 2007." Whether you're a neophyte or experienced Sherlockian, for a mind-blowingly good time, make sure to stop in at Randall Stock's fantastically essential "Beeton's Christmas Annual 1887: An Annotated Checklist and Census" page for a comprehensive and up-to-date overview of the magazine itself, price list, summary of recorded copies and the crown jewel, a list of Confirmed Copies of Beeton's Christmas Annual for 1887 known to exist with location, description, current owner, provenance, etc. If you've never visited Mr Randall Stock's Best of Sherlock website, bookmark the "Annotated Checklist and Census" page and then save it for a leisure moment when you can sit back and fully embrace the awesomeness of the document in toto. (Thanks to NYC Sherlockian John Genova for the tip!)


The Consulting Detective, by coincidence also featured a piece on A Study in Scarlet, though calling it "a most unusual introduction" citing the "The Country of the Saints" flashback as an odd structural choice: "Don't get me wrong - A Study in Scarlet is a fine piece of writing and without it, I wouldn't have a favourite fictional character to blog about. But in terms of plot structure, the novella is at first glance very unusual. I cannot speak for others, but I feel that the first part (the actual mystery) is far more interesting than the back-story set in Salt Lake City, Utah." Personally, my views on Part II of STUD aren't definitive but sometimes I like to think of it as crafty Watson's literary endurance test inserted to scare off those incapable of matching strides with "an old campaigner" - for once you survive the desolation of Utah, the whole universe of the Canon lay before you. Also this post contains the first instance I've seen of the new STUD edition from BBC Books featuring an Introduction by BBC Sherlock creator Steven Moffatt - along with the inevitable Benedict Cumberbatch adorned cover.

Ray Betzner, Pennsylvanian Sherlockian and editor of Wessex Press' must-have 75th Anniversary facsimile edition of Vincent Starrett's The Private Life of Sherlock Holmes (disclosure: sponsor), posted a terrific Starrett-centric post about Murder in Peking (originally published in 1936 as The Laughing Buddah), Starrett's last mystery novel: "In his memoirs, Starrett wrote of the story: 'It was a roman a clef with a vengeance. Friends and acquaintances made up the dramatis personae and the fictional murderer was myself.'" I sometimes forget that Starrett's Sherlockian writings only make up a fraction of the esteemed Chicago author's oeuvre, which included mystery novels and short stories, newspaper columns, literary criticism, poetry, science fiction and even a book about boats.


On Friday I had the chance to introduce Sebastian McCabe, Jeff Cody, and Lynda Teal to a few new readers at the Oakwood (Ohio) Rotary Club. My primary mission, though, was to deliver a talk called "Everything I Need to Know I Learned From Sherlock Holmes: Life Lessons From the Great Detective."

Check out Mr Andriacco's post listing "Ten Life Lessons Learned From the Master," my favorite being # 8: "Life really is stranger than fiction...and even fictional characters know it." Speaking of McCabe and Cody, I just finished reading Andriacco's fourth novel in the series The Disappearance of Mr James Phillimore (MX, 2013), his first set outside of Erin, Ohio, which takes place in London and is wonderfully packed with 'Holmesian' references and Sherlockian 'in jokes' and Easter eggs which will thrill and delight enthusiasts on both sides of the pond. This was also the first Andriacco book I read via the iPad, and I must say it was formatted beautifully for the iBooks app available from iTunes - highly recommended as a quality alternative to owning the physical book.


As long time readers of Always1895.net know, I've been a fan of Mr Alistair Duncan's blog for quite a while; and it is the simple yet informative, entertaining posts like this one that make his Doyleockian blog worth reading regularly. If you're new to Mr Duncan and his blog, and a fan of the greatest of literary agents, Arthur Conan Doyle, make sure to check out his well-researched series of books exploring various stages of ACD's life, each centered around a Conan Doyle domicile. Check out the Alistair Duncan Sherlock Holmes Collection on MX for more details - and while you're at it, follow Mr Duncan on Twitter @alistaird221b.

The Daily Show welcomed back host Jon Stewart on September 3rd from his Summer sabbatical (he was directing a film in the Middle East). The 'gag' was that Stewart 'forgot how to be an American' and went through a cycle of different identities, becoming 'Sherlock Holmes' for a few seconds. Jeremy Brett, Basil Rathbone and even Charlton Heston or Rupert Everett won't be upstaged any time soon by Stewart, but I'm sure he can beat out at least a few actors who've attempted to ape the Great Detective on celluloid over the years. For a semi-complete list of the best-to-the-worst Sherlock actors, check out this Sherlock Holmes Actors I Watched (From Best to Worst) list on IMDB.

The John H Watson Society announced that Founding Chair, Don Yates, has received the 2013 Dr. Bryce L. Crawford, Jr. Award for an outstanding essay in the tradition of the purist form of scholarship from the Friends of the Sherlock Holmes Collections for his essay "Sherlockian Memories" which appeared in the September 2012 issue of the Friends of the Sherlock Holmes Collections Newsletter. From 'Baron' to 'Pal', a hearty congratulations Sir!

Priory Scholars of NYC are quickly filling seats for their 'Back To School 2013' October 6, 2013 session at a new Manhattan venue The Churchill Tavern. Anyone in the NYC area, young or old, neophyte or old-hand, innocent or guilty are invited to join in on the Sherlockian scion scholarly fun. If you're interested in attending, please check out the Facebook page for registration info; and then hit the books and study up on "The Adventure of the Bruce-Partington Plans" for a quiz and discussion.

* To find a Sherlockian event in your area, check out The Sherlockian Calendar - maintained by Ron Fish with Sue and Ben Vizoskie of The Three Garridebs of Westchester Country, NY. If you are interested in posting an event to the calendar, please email the details to webmaster Ron Fish at RonF404 [AT] aol.com.

** If you’d like to see your event mentioned here on Always1895, please email me the name of your group/event, the details, contact info and web address, Twitter, Facebook, etc. and any other info that should accompany the above.