"They Took Into Partnership" [VALL] 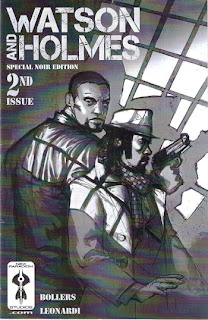 With BBC's Sherlock and CBS' Elementary, the idea of contemporary stories and modern reinventions of the Great Detective does not seem as radical as one might perceive. However, a recent comic series by New Paradigm Studios (whose Kickstarter campaign was featured on this site, and which has been the subject of an episode of I Hear of Sherlock) reveals an extremely similar - yet similarly radical - recasting of Holmes and Watson in contemporary times.

Watson and Holmes is a series written by Karl Bollers, and drawn by Rick Leonardi, that recasts the duo's adventures in contemporary New York. However, there is a slight racial switch, as the series takes place specifically in Harlem: John Watson is a medical intern, and Sherlock Holmes is a private investigator. Although it may lack the canon-influenced snap of the BBC series - or even the more procedural aspects of CBS's efforts - Watson and Holmessparkles with a straightforward narrative drive, having a kind of propulsiveness that characterized the best of Conan Doyle's work. There are slight nods and variations to the canon, but Bollers' writing captures the spirit (if not the letter) of canon.


Leonardi's artwork on Watson and Holmes is also exemplary - there is a great noir feel to the art, and he is able to capture physical action well. Characters have a definite look and tone to them, and his take on both Watson and Holmes gives both men a strong presence. Storytelling throughout is well paced, resulting in a desire for more stories and tales by the end of the fourth issue.

The first issues of Watson and Holmes are available online via Comixology and Comixpress, as well as through better comics shops. Although a trade paperback collection is likely, Watson and Holmes is also enjoyed in single issue portions and worth any Sherlockian's time. With plenty of nods and Easter eggs for Sherlockians, this is one series worth seeking out.