Charles Augustus Milverton Gets a New Name in Sherlock 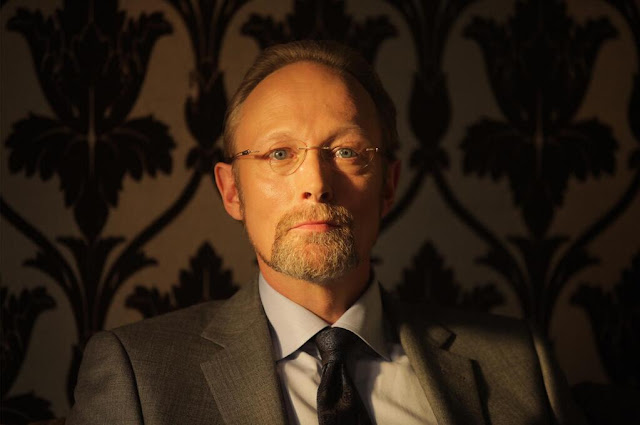 This morning we were treated to the news that the major villain in the BBC's Sherlock Season 3 has been announced.  It is none other than a modern-day manifestation of Charles Augustus Milverton: Charles Augustus Magnussen.

The announcement was made by producer Sue Vertue via her Twitter account and the news immediately spread across the web. The villain will be played by Danish actor Lars Mikkelsen, who may be known to a wider audience from his role in The Killing.

Of course, our readers know Charles Augustus Milverton from the eponymous adventure in the collection of stories The Return of Sherlock Holmes. You can read the original story, in its original layout courtesy of the Stanford University "Discovering Sherlock Holmes" initiative from 2007. Milverton was known to Holmes as "The worst man in London," described as follows:


"He is the king of all the blackmailers. Heaven help the man, and still more the woman, whose secret and reputation come into the power of Milverton. With a smiling face and a heart of marble he will squeeze and squeeze until he has drained them dry. The fellow is a genius in his way, and would have made his mark in some more savoury trade. His method is as follows: He allows it to be known that he is prepared to pay very high sums for letters which compromise people of wealth or position. He receives these wares not only from treacherous valets or maids, but frequently from genteel ruffians who have gained the confidence and affection of trusting women. He deals with no niggard hand. I happen to know that he paid seven hundred pounds to a footman for a note two lines in length, and that the ruin of a noble family was the result. Everything which is in the market goes to Milverton, and there are hundreds in this great city who turn white at his name. No one knows where his grip may fall, for he is far too rich and far too cunning to work from hand to mouth. He will hold a card back for years in order to play it at the moment when the stake is best worth winning. I have said that he is the worst man in London, and I would ask you how could one compare the ruffian who in hot blood bludgeons his mate with this man, who methodically and at his leisure tortures the soul and wrings the nerves in order to add to his already swollen money-bags?"

Sounds like a perfect recipe for a villain in the Cumberbatch / Freeman lineup. As a reminder, the titles for the three episodes of Season 3 include:


If we recall that in the original CHAS that Holmes, disguised as Escott, "a plumber with a rising business," got himself engaged to Milverton's housemaid, the title "His Last Vow" seems to take shape. And when we recall that the hints that Mssrs. Gatiss and Moffat gave fans some time ago were "Wedding. Rat. Bow," one could infer that wedding could feasibly mean the engagement (although a Mrs. Watson could figure into things) or that rat refers to Milverton ("Milverton had glided as quick as a rat to the side of the room." [CHAS]).

At any rate, we're delighted to see an actor who looks the part of Milverton, just as Robert Hardy did in Granada's The Master Blackmailer. And Hardy was superb in his unabridged readings of a number of the original stories - including "Charles Augustus Milverton," in which we think his performance was even better than in the Jeremy Brett Granada outing. You can find some of his audio book work on Amazon.co.uk and Amazon.com.


And if you're in the mood for some Milvertonian mahem, enjoy this clip: