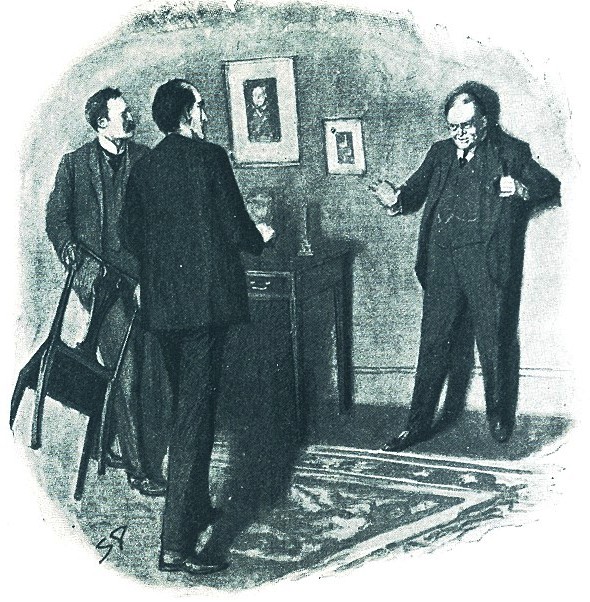 It maybe hard to believe that the whole world does not know of Klinger vs. Conan Doyle Estate Ltd. One can read of the lawsuit in The New York Times, The Economist, Bloomberg Businessweek  and hear of it on NPR. Certainly, it must be on the lips of every Sherlockian and every Sherlockian must have an opinion on the matter. It was a topic on I Hear of Sherlock Everywhere  and Les Klinger has been interviewed by the Baker Street Babes. In brief, according to the Free Sherlock:

Klinger seeks to have the Court determine that the characters of Sherlock Holmes and Dr. John H. Watson are no longer protected by federal copyright laws and that writers, filmmakers, and others are free to create new stories about Holmes, Watson, and others of their circle without paying license fees to the current owners of the remaining copyrights.

Klinger says that the litigation came about because he and Laurie R. King, best-selling author of the “Mary Russell” series of mysteries that also feature Sherlock Holmes, were co-editing a new book called “In the Company of Sherlock Holmes.”  This collection of stories by major mystery/sci-fi/fantasy authors inspired by the Holmes tales, is to be published by Pegasus Books. “The Conan Doyle Estate contacted our publisher,” says Klinger, “and implied that if the Estate wasn’t paid a license fee, they’d convince the major distributors not to sell the book. Our publisher was, understandably, concerned, and told us that the book couldn’t come out unless this was resolved….

“This isn’t the first time the Estate has put pressure on creators,” Klinger adds. “It is the first time anyone has stood up to them. In the past, many simply couldn’t afford to fight or to wait for approval, and have given in and paid off the Estate for ‘permission.’ I’m asking the Court to put a permanent stop to this kind of bullying. Holmes and Watson belong to the world, not to some distant relatives of Arthur Conan Doyle.”

Some have taken the Free Sherlock movement to heart. They have “taken up arms”, spiritually if not financially, with Klinger and see the seal of the Conan Doyle Estate Ltd. as something undesirable. This is where 221B Cellars come in to the story. Vintners and Sherlockians, 221B Cellars sent out a mailing offering their 2012 vintage A Study In Scarlet wine, which also featured the Estate seal. This struck some well-meaning FreeSherlockians as a political statement and left them disinclined to sample the Cellars wares.

Don Libey of 221B Cellars was puzzled. As he explained on the site’s blog on April 27, he was unaware of controversy surrounding the Estate and, indeed, thought he was doing the right thing:

We have always been respectful of the U.S. copyright laws and comply with the display of the seal and wording as specified by the license. We do this on the wine and on our books. We thought (and continue to believe) that copyright law requires one to meet the conditions of licenses and contracts, and we do so freely as we live in a society and nation of laws. Apparently, there is some disagreement among Sherlockians regarding that responsibility, and when and if the copyright law is changed, we will comply with the lawful changes. And, frankly, we are also respectful and appreciative of Sir Arthur Conan Doyle for what he has given us over so many years.

He further explained the finances involved with A Study In Scarlet wine:

The wine is priced at $39 a bottle plus shipping. It costs us $21 a bottle, including a $1.50 licensing fee to The Doyle Estate Ltd. There is little profit in making one barrel of wine for anyone. Of the $18 gross profit, we will donate a total of $9 (50% of profits), giving $4.50 to the University of Minnesota and $4.50 to the Napa Valley Napoleons of S.H. We hope they will use these small donations for educational or research purposes to further Sherlockian studies, perhaps focusing on youth.

We are also donating (no cost) 2 bottles to the Baker Street Irregulars and 1 bottle to The Sherlock Holmes Society of London. We hope  they will auction them off and raise a few dollars for furthering Sherlockian  studies (the wine and the shipping will cost me, personally, about $120, and that's my  money).

The other half of the profit leftover ($9) we will reserve to partially pay for the production of one barrel next year of The Hound of the Baskervilles, a first edition Zinfandel. Again, only 200 bottles will be made. Yes, we have $9 of GROSS profit (not Net Profit) on a bottle, but this doesn't even begin to cover the advertising expense (we spent $250 on the back page of The Baker Street Journal for this  summer, and that helps the BSI and The Baker Street Journal even more), the $400 in printing and postage for the advertising card mailing, the $1,000 cost of a French oak barrel to age the wine in,  the label costs of $300, etc., etc., etc.  I figure if we are successful…this project is only going to cost me about $2,500 of my own money. But, hey...that's what old Sherlockians do to have fun. Some go to Switzerland and visit the falls before they themselves go over the falls; instead, we made 200 bottles of wine for what we thought was a good purpose.

The question arises, should a FreeSherlockian boycott 221B Cellars? Does the $1.50 that goes to the Estate negate the $9.00 that goes to charity and $9.00 of the Cellars gross profit? If so, does that mean to be ideologically pure one must boycott all who are licensees? After all, many Holmes-related titles published in the U.S. in recent years have been licensed by the Estate, whether with an official seal on the cover or an acknowledgement in small print in the front matter. Lyndsay Faye’s Dust and Shadow, Caleb Carr’s The Italian Secretary, Anthony Horowitz’s The House of Silk , Andrew Lane’s Young Sherlock Holmes series, even Leslie Klinger’s The New Annotated Sherlock Holmes have an association with the Estate. As does Warner Bros. Sherlock Holmes movie series with Robert Downey Jr. and Jude Law, CBS’ Elementary, and PBS’ Masterpiece Mystery! when it airs Sherlock. The pure ideologue will end up with pretty bare shelves when they are done eliminating the taint of the Doyle Estate.

I emailed Les Klinger and asked him about the issue of boycotting Estate licensees. He had this reply:

While I appreciate the sentiment, I don’t think that a boycott is fair. Many licensees have been pressured into obtaining licenses, and not everyone has the freedom (that is, the time or the money) to stand up to the Estate’s bullying and threats of blocking sales.

I do have a problem with flaunting “authorized” status, as in the case of The House of Silk. I wrote about this in my review of that book for the Toronto Globe & Mail. What makes an “authorized” product better than an unauthorized one? That is a more subtle issue, however, than the basic question of whether one must be authorized to sell wine. I find that position ludicrous. The Estate does not own a trademark in the name “221B” or “Sherlock Holmes” and will have a very difficult time establishing their case. There is no copyright infringement that I can see even possible in calling one’s wine “221B Cellars” or using the name or logo of Holmes in marketing it. There are hundreds of businesses that do so.

In a follow up email to me he added, “If the owners of 221B Cellars choose to obtain a license, that is their decision; however, they should not be legally compelled to do so under a baseless threat of restraint.”

What should a FreeSherlockian do? Should they shun all those hold truck with the Estate, or perhaps have certain exceptions like a vegetarian who none the less cannot pass up veal marsala because it tastes so good? If the Conan Doyle Estate Ltd. is Charles Augustus Milverton, the king of all the blackmailers who would use Holmes, then are we to paint the victims of “bullying and threats” with the same brush and find them no better than the blackmailer? Who would suffer under such a boycott, the blackmailer or the victim? Or should FreeSherlockians go about their Sherlockian lives, support Les Klinger and let the courts decide the matter?