"...and you know how subtle are the links which bind two souls which are so closely allied."
- 'The Adventure of the Speckled Band' 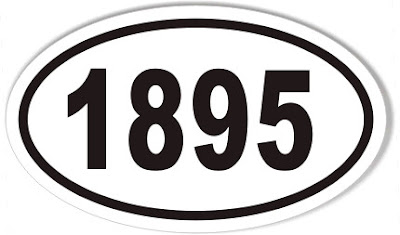 A weekly roundup of links from across the web related to Sherlock Holmes, courtesy of Matt Laffey from Always1895.net. We welcome your comments and feedback, and if you have any material to include in the weekly roundup, please send to always1895@gmail.com.

A Requiem For Sherlock Holmes announced dates for a staged reading happening this coming weekend August 8th - 10th, 2013 at WorkShop in NYC by PGM Productions. More about PGM: "One could say the ‘creative trust’ of PGM was informally born over a friendly glass of Scotch. On the evening of January 18, 2012, WorkShop Theater Company members, Paul Singleton, Greg Oliver Bodine and Michael Selkirk met at The Players on Gramercy Park to discuss partnering on a Sherlock Holmes play that Greg would write, with Paul and Michael in the iconic roles of Holmes and Watson....it was agreed that Greg should adapt two Sherlock Holmes stories, "The Final Problem" and "The Adventure of The Empty House". Learn more by following PGM on their Facebook page. And for a preview, check out A Requiem For Sherlock video. Lastly, those Sherlockians who attended The William Gillette Memorial Luncheon during BSI Weekend 2013 were treated to a short but brilliant five minute teaser featuring the epic scene when Holmes and Moriarty first meet (ie. "All that I have to say has already crossed your mind..." FINA). To be clear, this weekend's performance is not the final play, but simply a read through - the actual performance is scheduled for sometime in 2014.

[Note that the flier features a depiction of a black arm band reportedly worn by Londoners after "The Final Problem" appeared in The Strand (December 1893); to find out more about black mourning arm bands, the 'death' of Sherlock Holmes and whether or not they are "apocryphal", check out the next link re: Peter Calamai.]

Baker Street Journal - for those that missed the actual letter from Peter Calamai regarding post-FINA 'apocryphal' black mourning bands in the BSJ Spring 2013: "The first person offering proof (as judged by your Editor) of Londoners wearing mourning bands upon the publication of "The Final Problem" in response to Sherlock Holmes's 'death' wins a year's free subscription to the Journal." Peter Calamai's (the 2012 Morley-Montgomery Memorial Award winner) challenge has inspired many of us to conduct searches through various online newspaper archives starting from December 1893 - the publication date of FINA in The Strand - but so far it's all been for naught. It appears that John Dickson Carr's reference in his The Life of Sir Arthur Conan Doyle to men wearing mourning bands post-FINA, is in fact apocryphal and/or some sort of literary urban legend.
Dan Andriacco recently picked up three issues of the Sherlock Holmes Mystery Magazine: "SHMM is a blend of mystery fiction and non-fiction, some but not all of which has Sherlockian connections. It is edited by veteran mystery writer and anthologist Marvin Kaye, who recently agreed to buy for the magazine an article that I wrote on Rex Stout and Sherlock Holmes." I've been seeing advertisements for the SHMM quite a bit recently and have wondered if I should add it to my current stable of Sherlockian-centric subscriptions (ie. Baker Street Journal, Sherlock Holmes Society Journal, The Serpentine Muse). Mr Andriacco's review is the first SHMM review I've read so far, and it's positive enough that I might have to at least pick up an issue or two. So far, my favorite SHMM cover I've seen is the below illustration of Holmes, the hound and a young maiden who is probably supposed to be the daughter of the yeoman from HOUN.

Westminster Libraries by way of announcing the recent move of the Sherlock Holmes Collection from the Marylebone Library to the Westminster Reference Library, published an irregular observation "The Case of the Leicester Square Furniture Van". Their tale begins: "[it] was in July ’13 that Sherlock Holmes and I left our old rooms near Baker Street for the last time. Impending redevelopment and building work would bring major improvements for habitués, but we had to move elsewhere. It was not without a tinge of sadness that I surveyed the 150 crates into which our books and artefacts were packed, re-locked the 6 massive bookcases and checked the other furniture ready to be loaded on to the lorry..." Visiting the Sherlock Holmes Collection, now housed at Westminster, is definitely on my Sherlockian bucket list. Westminster Reference Library is a specialist public reference library in London's West End and is the new home of the Sherlock Holmes Collection, Third Floor, Westminster Reference Library, 35, St. Martin’s Street, London, WC2H 7HP.
My Tin Dispatch Box reviewed Death on a Pale Horse: Sherlock Holmes on Her Majesty's Secret Service by Donald Thomas. Quite a promising sounding pastiche, the grandiose titled Death on a Pale Horse is described as a "thrilling military adventure which pits Colonel Rawdon “Hunter” Moran, elder brother of Colonel Sebastian Moran, against Sherlock Holmes and presents danger to Dr Watson. We see both Holmes take on Moran from the safe confines of Baker Street to continental Europe, culminating in a climatic showdown in the English Channel." The British Government aka Brother Mycroft makes an appearance in the guise of the British Secret Service, essential to defeating Moran and restoring a piece of honor back to the British army and the British Empire.
Barefoot on Baker Street muses on the differences between BBC Sherlock and Granada's Sherlock Holmes and compares and contrasts the two shows by framing them through the brain of her 15 year old stepson who enjoys reading the Canon (via his Kindle) and BBC Sherlock but for whom

"the gentle world of Victorian London with its telegrams and steam trains couldn't be further from his modern life..." Ms Walters accepts some of the inherent, quasi-generational differences between the two shows, but concludes: "I'm not making comparisons and happily love both interpretations, but it’s my Granada box-set I turn to when I really need a Sherlock Holmes fix."

Speaking of getting one's Granada Sherlock fix, Granada Brettish Holmes posted one of my favorite 'modern' Sherlock posters of all time. This particular poster, designed by artist Paul Davis, was used for Granada's The Master Blackmailer (1993). I've seen a few of these posters in real life and they're very large and even more arresting in the proverbial flesh.

Culture Shot, who clearly gets their Sherlockian fix via BBC Sherlock, might have published the last word on BBC Sherlock actor Benedict Cumberbatch in "Feed your Ben-addiction with this comprehensive guide to Cumberlovin’" by Cumberbitchin' fangirl Caitlin Kelley, who is a staff writer for The Daily Californian. Ms Kelley points out that "fangirling over Benedict is not just about adding the prefix “Cumber-” to any word until it loses any meaning it already didn’t have. Being a fangirl is about appreciating every aspect about him that you can glean from his public image. And I’ve done in-depth, ahem, research to help you develop your Cumbercrush..." And she's not lying. Cumber-punning aside, this article features BC in various states of undress (and even in a dress), video interviews of BC being "serious", clever, ridiculously charming, hilarious and any other trait one might find in a denizen of Mt Olympus. If you're going to read just one article all year about the guy that plays Holmes in the BBC modern adaptation of the Sherlock adventures, let this be the one.

Sherlock Peoria considers the day-to-day experience and surprises of living with your post-pruned Sherlockian library - specifically about how it is practically impossible for a Sherlockian library to be 100% Christopher Morley-free. Like Tribbles, the books by "the first Sherlockian super-fan, Christopher Morley" - Keefauver's post is worth reading just for that apt description - are always lurking somewhere in or near the library of a Sherlockian (eg. Parnassus on Wheels). Having written considerably more non-Sherlockian material than actual books about Sherlock Holmes, it's easy to find yourself with a mini-Morley library of books that really have nothing to do with Holmes yet due to said 'first super-fan' status, are tacitly allowed to live in the general vicinity of the Sherlockian neighborhood. Well, Mr Brad Keefauver took a stand and tried to liquidate all his Morley books ("to live with a fellow Sherlockian who is enjoying him anew"), only to trip over four overlooked Morley books a few days later - lending credence to the notion that the bookshop is haunted.

[I'll never tire of saying this, but one book no Sherlockian should be without is Steven  Rothman's  collection of essential Morley writings on Sherlock Holmes The Standard Doyle Company.]
John Foster's Sherlock Holmes Society of St. Charles discovered artist Larry Gosser, whose Drawing Room project hosts the series "Sherlock Holmes Casebook: Famous Crime Scenes" featuring really incredible renderings of Holmes' most famous cases, or more specifically, illustrations depicting the main scene of the main crime from a given story. For example, the Silver Blaze Crime Scene depicts John Straker's body sprawled out on the moor with key features carefully labeled (eg. "horse shoe tracks"). As a bonus, Sherlock Holmes has been drawn into most of the scenes where he's usually smoking a pipe and/or making that scowling ratiocination face one might employee while viewing a crime scene. One of Mr Foster's best pieces in the series is his Hound of Baskervilles Crime Scene which is framed by the giant footprint of a gigantic hound. 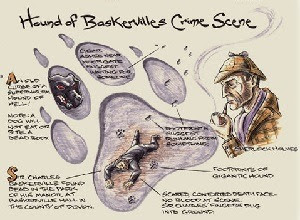 ["Mr. Holmes, they were the footprints of a gigantic hound!"]
Sherlock. Everywhere. reposted an item from Cracked.com's 'If 40 Famous Movies Had $50 Budgets'; imagine Sherlock Holmes: A Game of Shadows if Guy Ritchie's budget was cut down from $125,000,000 (yes, that's 125 millions of dollars) to $50 (via @pawkysherlockianhumor). 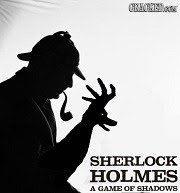 [Sherlock Holmes: A Game of Shadows (via @pawkysherlockianhumor).] 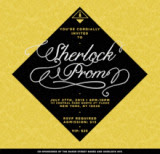 Sherlock Prom is happening this Saturday July 27, 2013 for those in the NYC area: "The event is Sherlock Prom, a Sherlock Holmes themed prom event right here in New York City! There will be music and dancing, food, a small viewing area which will be playing various Sherlockian shows and movies, a photo booth, and more! It's generally a prom party, but the theme is Sherlock Holmes, and that will be reflected in a lot of the decorations and activities....Tickets are $15 for General Admission, and $25 for VIP." And it's not all fun and games afoot, because proceeds from Sherlock Prom will go towards the non-profit Pathways to Housing NY.
Priory Scholars of NYC still has 4 or 5 seats available for their Sunday meeting 'Summer Session 2013' (July 28, 2013), but please RSVP if you plan on attending. Come prepared to get deep into "The Adventure of the Red-Headed League" and win prizes ranging from a Sherlock t-shirt to comics to books.

Jamie Mahoney, during this weeks #GranadaHolmes watch along Twitter session co-hosted by @Sherlock_DC and friends, punctuated a discussion about Jeremy Brett's performance in The Boscombe Valley Mystery with the below image that's best left to speak for itself. If you're interested in joining in on the virtual Granada watching hangout session, mark your calendar for Thursdays at 8pm (EST) and look for the #GranadaHolmes - and click to see what else my fellow Granadianphiliacs and I had to say about BOSC. 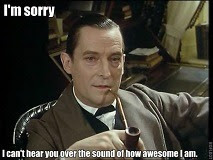 [To find out just how awesome Jeremy Brett really is, pick up Bending the Willow, in either book form or for your e-reader. by David Stuart Davies.]
As always if you are looking for a Sherlockian scion event near you, check in with the indomitable Sherlockian Calendar and/or join the Sherlock Holmes Community on Google+. Hope to see you soon!