May Birthdays of Three Legendary Actors Associated with Sherlock Holmes

"great reverence at the famous" [HOUN] 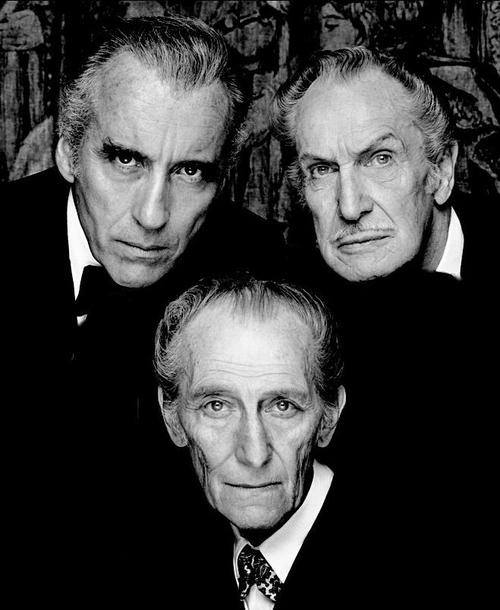 The last two days mark birthdays of three legendary actors associated with Sherlock Holmes. Each is known beyond his Sherlock Holmes work, but together their collective Sherlockian CVs are impressive.

Peter Cushing, Vincent Price and Christopher Lee are icons of the screen spanning the majority of the 20th century and into the 21st. They all had a significant impact on the noir, horror and sci-fi realms and had cheekbones that could cut glass.

So let's take a look at these three gentlemen on the anniversaries of their birth and on how they touched the world particularly through their Sherlock Holmes-related roles.

Then eight years later, Lee was to do what no other actor had done until then or has done since: he went from playing Sherlock Holmes to playing Mycroft Holmes. He lost the deerstalker (and his toupee) and joined Robert Stephens in Billy Wilder's The Private Life of Sherlock Holmes in 1970, in a fantastical plot that involved Loch Ness, a submarine and a visit from Queen Victoria herself.


Then, in the early 1990s, Lee teamed up with Patrick Macnee as his Watson and made two films: Incident at Victoria Falls and Sherlock Holmes and the Leading Lady that took a look at Holmes in his retirement years.

Finally, Lee took on the job of host in The Many Faces of Sherlock Holmes, in which he took us through the legion of actors who have portrayed the master detective throughout the years on stage, television and film. It's a fun overview, and while incomplete by today's standards, as we've had two decades of Holmeses since then, it helps to ground viewers in some of the popular manifestations of Sherlock Holmes throughout the years. We highly recommend picking up a copy of the DVD (available in the above link).

May 26, 2013 marks the centenary of Peter Cushing's birth. Born in 1913, Cushing graced the large and small screen as Sherlock Holmes over the course of a number of decades. As we mentioned above, Cushing had a turn in The Hound of the Baskervilles (1959), with Andre Morrell as his Watson. Then, it was to return to him in the mid-1960s when Douglas Wilmer gave up the role on the BBC television series for 16 episodes. 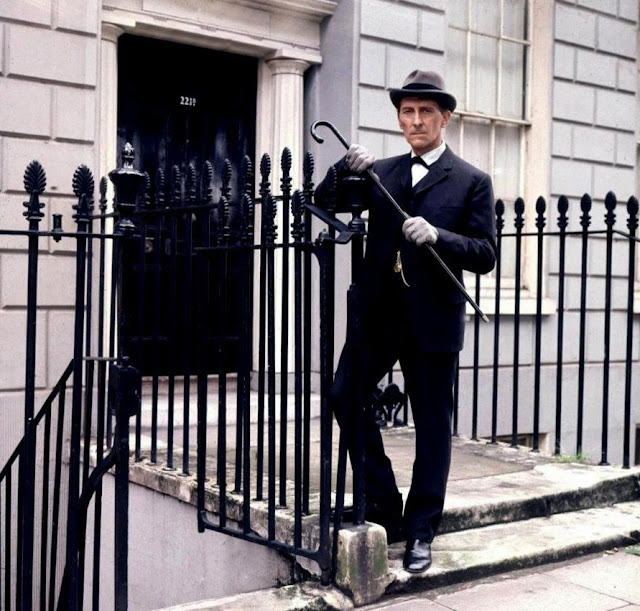 The series was well received and is critically acclaimed now despite the hectic production schedules that put the actor on timetables of less than two weeks for each episode. The final episode was "The Blue Carbuncle," and by that time, viewers could see the close and amiable relationship Cushing had developed with his Watson, Nigel Stock. We commented on the very same thing during Episode 49 of I Hear of Sherlock Everywhere.

Cushing returned to the screen in the 1984 film Sherlock Holmes and the Masks of Death looking quite elderly, with an equally aged John Mills by his side. But his relationship with Holmes was not merely through his career; Cushing was genuinely interested in the Canon. In fact, he was an active member of the Sherlock Holmes society The Northern Musgraves, and the group even adopted his freehand sketch of Holmes as their official logo (second image below). Those interested in the more private, tender and humorous side of the actor would do well to pick up a copy of the biography Peter Cushing: A Life in Film as well.

Our final entrant in this triumvirate of Sherlockian birthdays is none other than Vincent Price, who would have been 102 years old on May 27, 2013. Price made his debut in the horror genre in the 1939 film Tower of London with Boris Karloff, and was seemingly typecast from then on. His career spanned over five decades, and Price had two very significant associations with Sherlock Holmes along the way.

One was his portrayal of the evil Moriarty-inspired Professor Ratigan in The Great Mouse Detective (1986). Price had always wanted to portray the voice of a Disney character, and this film allowed him to do just that. His portrayal is classic Vincent Price, moving from charming dark humor to pure evil with a seeming blink of an eye.

Also during that time (from 1981-1989, to be exact), Vincent Price was the host for the PBS production of Mystery! which featured such detectives as Hercule Poirot, Miss Marple, Albert Campion, Adam Dalgliesh, Father Brown, Inspector Morse, Lord Peter Wimsey, Horace Rumpole and of course, Sherlock Holmes. Price's introductions for the Granada series starring Jeremy Brett were as rich in setting as the episodes themselves. Friends of ours in the Baker Street Irregulars and The Speckled Band of Boston contributed to the writing of these, as well as to the set decoration.

Sadly, these introductions are not part of the DVD collections of the Granada series that one may purchase,  but some are still available on YouTube today. Here is a playlist that contains many of them.

We hope you've enjoyed this ramble through the connections of three greats of the stage and screen. And if you're interested in more, please take a look at some of the affiliate links we've provided to Amazon.

Image credit: top image is a publicity shot from The House of Long Shadows, 1983.