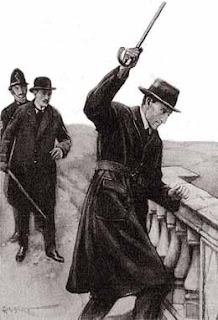 When a figure like Sherlock Holmes has been around for over a century, there are bound to be misconceptions that creep into public thinking. We blame this not on carelessness or laziness but rather on the overwhelming popularity of the great detective.

The image of Holmes clad in deerstalker and Inverness cape, clenching a Meerschaum pipe in his teeth is the universal, if cliched, image of a detective. But was it true?

We were recently reminded of a number of classic myths about Sherlock Holmes, thanks to a contest being sponsored by The Baker Street Journal (also a sponsor of our program): it has long been rumored that men wore black armbands throughout the city of London after reading "The Final Problem" in the Strand Magazine. And only anecdotal evidence has been referenced whenever this supposed fact is brought up. The BSJ is offering a free year's subscription to anyone who can definitively prove that such mourning attire was worn in response to the death of Sherlock Holmes.


That got us to thinking: what other Sherlockian myths are there? And are we guilty of propagating any of them ourselves? Join us for a quick game show-style question and answer session on the topic, as well as a reading of your comments from our last show and some recent news from the world of Sherlock Holmes.


The Editor's Gas-Lamp: Rather than the traditional gas-lamp, which began under Edgar Smith's editorship of the Baker Street Journal, we thought we would mark May 5 as the 123rd anniversary of Christopher Morley's birth by reading two of his poems: the very short "The Secret" and the quite remarkable "Toulemonde."


You do subscribe to us on iTunes, don't you?

And above all, please let our sponsors know that you heard us mumble their hallowed names on the show: Wessex Press and The Baker Street Journal.
5/11/2013 04:19:00 PM
episodes, sherlockian