"Don't imagine that you can bully me" [CHAS] 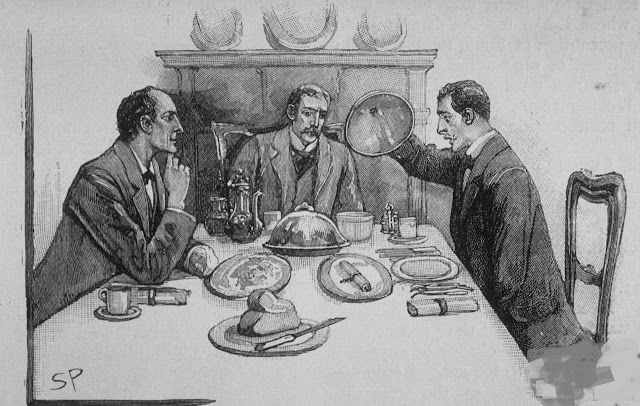 It isn't often one gets a ringside seat at a legal-literary battle royal, but it would seem that we're about to bear witness to some activity in that particular area.

Of course, you'll recall that recent legal battles in England have revolved around Undershaw, Conan Doyle's home for about a decade that included when he wrote The Hound of the Baskervilles. We've covered that topic extensively here - click for more background on that topic.

But this is wholly different.

Currently, the so-called estate undertakes high-handed legal action to levy royalties and other payments from authors who use the characters in their own works. This is despite the fact that there are only 10 stories in the entire Canon that are still under copyright protection (in the United States). Klinger, for one, will not stand for this bullying, and has formally filed suit and issued a press release.

We'll allow you to read directly from the press release:

A civil action was filed today in the United States District Court for the Northern District of Illinois against the Arthur Conan Doyle Estate by Sherlock Holmes scholar Leslie S. Klinger. Klinger seeks to have the Court determine that the characters of Sherlock Holmes and Dr. John H. Watson are no longer protected by federal copyright laws and that writers, filmmakers, and others are free to create new stories about Holmes, Watson, and others of their circle without paying license fees to the current owners of the remaining copyrights.

Klinger says that the litigation came about because he and Laurie R. King, best-selling author of the "Mary Russell" series of mysteries that also feature Sherlock Holmes, were co-editing a new book called "In the Company of Sherlock Holmes." This collection of stories by major mystery/sci-fi/fantasy authors inspired by the Holmes tales, is to be published by Pegasus Books. "The Conan Doyle Estate contacted our publisher," says Klinger, "and implied that if the Estate wasn't paid a license fee, they'd convince the major distributors not to sell the book. Our publisher was, understandably, concerned, and told us that the book couldn't come out unless this was resolved.

“It is true that some of Conan Doyle's stories about Holmes are still protected by the U.S. copyright laws. However, the vast majority of the stories that Conan Doyle wrote are not. The characters of Holmes, Watson, and others are fully established in those fifty 'public-domain' stories. Under U.S. law, this should mean that anyone is free to create new stories about Holmes and Watson.

"This isn't the first time the Estate has put pressure on creators," Klinger adds. "It is the first time anyone has stood up to them. In the past, many simply couldn't afford to fight or to wait for approval, and have given in and paid off the Estate for 'permission.' I'm asking the Court to put a permanent stop to this kind of bullying. Holmes and Watson belong to the world, not to some distant relatives of Arthur Conan Doyle."

Klinger denies that he was trying to strip the Estate of its proper rights. "The Estate still owns copyrights in the U.S. on 10 of the stories about Holmes—some of the stories that appeared in The Case-Book of Sherlock Holmes. As a lawyer myself, I respect those rights, and in fact I licensed them when I published my New Annotated Sherlock Holmes."

All of the remaining 10 stories will be in the public domain after 2022, 95 years after the last was published.

Klinger is represented by Scott M. Gilbert of Hinshaw & Culbertson LLC in Chicago, who serves as litigation counsel, and Jonathan Kirsch in Los Angeles, an intellectual property attorney specializing in publishing issues.

“Les Klinger is the ideal plaintiff to undertake this praiseworthy effort to confirm the public-domain status of the iconic characters and settings of the Sherlock Holmes Canon and remove the cloud of fear, uncertainty and doubt that the Estate has used to scare off others,” says Kirsch. “As a world-renowned expert and an acclaimed author, he is willing to champion a cause that others have been too timid to undertake. Authors, movie-makers and other creative people owe him a debt of gratitude.”

Klinger and Laurie R. King previously edited A Study in Sherlock: Stories Inspired by the Sherlock Holmes Canon (Random House, 2011), a collection of new stories written by Lee Child, Neil Gaiman, Margaret Maron, and other contemporary writers. Their second collection, In the Company of Sherlock Holmes, will feature new stories by Sara Paretsky, Michael Connelly, Lev Grossman, Larry Niven, Val McDermid, Denise Mina, Cornelia Funke, Jeffery Deaver, and other major writers. Some of the stories are new adventures of Holmes and Watson; others are about people inspired or influenced by the Holmes stories of Conan Doyle.

For more information, see the web site Free-Sherlock.com or write to Mr. Klinger at mail@lesliesklinger.com.


The formal legal documents can be found here:


We're happy to let the legal system sort out all of the specifics, and we appreciate Mr. Klinger's measured approach - note that he still respects the copyright of the works that are under such protection. But at 125 years as part of the public consciousness, it doesn't seem reasonable to expect that the characters should be under the same level of protection.

Michael Buffer, the famous ringside announcer, trademarked the phrase "Let's get ready to rumble!" In doing so, he managed to net over $400 million by licensing the phrase. But as Holmes has been with us for a century and a quarter and the famous profile, pipe, hat and even utterances of "No sh*t, Sherlock" are part of our public consciousness, should those things also be subject to the heavy hand of the so-called estate?

We prefer to think not. We wish Mr. Klinger the best in his endeavors. What's your take?

Feel free to join the discussion below or via the #FreeSherlock hashtag on Twitter.