Get the Baker Street Journal on DVD

"the gleam of the electric switch" [CHAS] 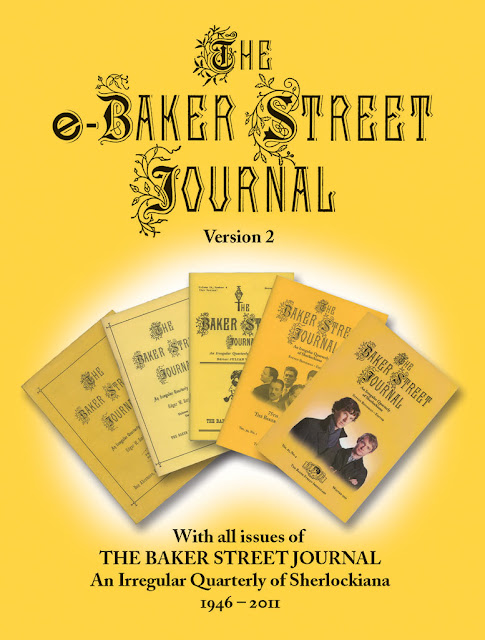 Over a decade ago, The Baker Street Journal did the unthinkable: it entered into the electronic age. That is to say, it released a CD-ROM containing every issue from 1946-2000, debuted its web site (originally at bakerstreetjournal.com) and introduced an online ordering system.

And while the Baker Street Irregulars are not yet offering an electronic subscription option to the BSJ (we believe it to be inevitable, considering what's been happening in the news and book industry over the course of the last, oh decade or so, but we certainly don't expect it in the near term), the Journal has come a long way in its recent history. From updating the style of the wrappers to including a different cover image on each new issue, the physical version is much more pleasing to the eyes and hands.

And the Journal, which has for years offered advertising space within its own pages, has begun sponsoring other outlets worthy of association, such as I Hear of Sherlock Everywhere and Trifles podcasts. We trust that those affiliations have garnered the attention of a new swath of fans who have discovered Sherlock Holmes in a variety of manners.

For those interested in understanding what happens between the yellow covers can get a sample by clicking on the Latest News and Issues section of the site.

In addition, there are Sample Articles that provide a decent round-up of recent writings about the Sherlock Holmes stories, and of course some of the past winners of the Morley-Montgomery Award (for the best article in the BSJ each year) are available as well. And for a fuller understanding of some of the scholarship that made it into those pages over the course of the first 50 years, there are free electronic indexes available (thanks to the hard work of the late Donald Redmond, BSI).

Of course, the world moves ahead and the BSJ continued to publish in the decade since the CD-ROM first was made available. So the Irregulars have decided to update the first volume, expand it to include more of the current information and update the format.

The eBSJ v2 provides a PDF archive of all BSJ issues from 1946-2011, including all the Christmas Annuals, on a single DVD.  The the new eBSJ adds 55 issues from 2001-2011, plus makes other improvements to the original CD files and is priced at $99 plus shipping.

You can download each PDF to your hard drive (or upload them to the cloud) for easy access and search, whether you're at home or on the go. It puts decades of Sherlockian research, scholarship and entertainment at your fingertips.

Get your copy today.