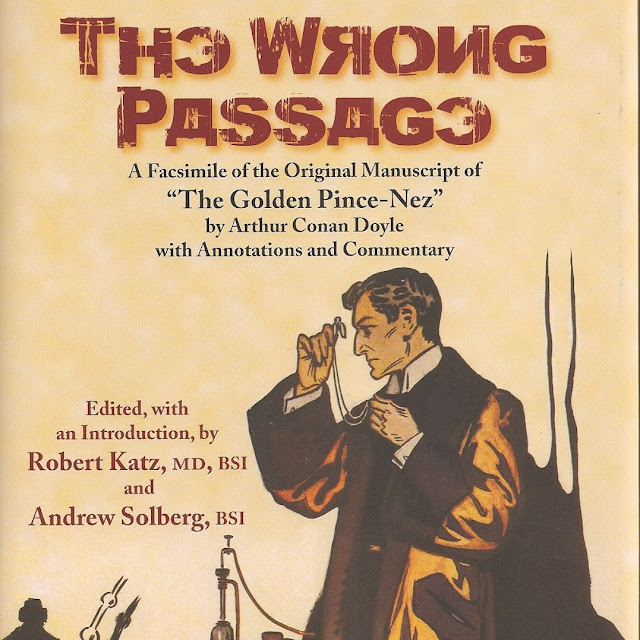 Our 50th episode is a fitting one. As you know, a 50th anniversary is typically celebrated with gold. Because we appreciate our listeners so much, we would settle for nothing less than the same.

But our gold comes in the form of a scintillating conversation with the two editors of the Baker Street Irregulars' eighth entry in their Manuscript Series, The Wrong Passage, which is a look at the manuscript of "The Adventure of the Golden Pince-Nez." Co-editors Andrew Solberg, BSI ("Professor Coram") and Robert Katz, MD, BSI ("Dr. Ainstree") joined us to discuss just what it is that goes into creating a significant piece of scholarship such as we've come to expect from BSI publications of late.

From the history of the manuscript itself, to artifacts from Paul Churchill's famed "evidence boxes," to an in-depth look at the historical background alluded to in the tale, the breadth of topics within the book is impressive. Also included are a number of other analyses on topics ranging from the historical and geographical to the linguistic, religious and medical, by noted Sherlockians Peggy Perdue, BSI ("Violet Westbury"), Denny Dobry, Donald Pollock, MD, BSI ("The Anthropological Journal") former member of the BSI, Albert Silverstein, BSI ("Professor Presbury"), C. Paul Martin, MD, BSI ("Dr. Leslie Armstrong"), Jacquelynn Morris, Richard J. Sveum, MD, BSI ("Dr. Hill Barton"), John Baesch, BSI ("The State and Merton County Railroad"), and William Hyder, BSI ("A Most Valuable Institution").

Our discussions range as far and wide as the book itself, and we also cover just a bit of the BSI Weekend festivities from 2013. But more on that in a future episode. This one clocked in at over an hour and 20 minutes, but we think you'll enjoy the conviviality between four Sherlockians as you spend a long evening with Holmes.

Your thoughts on the show? Leave a comment below, send us an email, call us at (774) 221-READ (7323) or drop by our Facebook page. You can also find us on Twitter, Tumblr and Instagram. Be sure to visit the Sherlock Holmes Community on Google+.

And as always, please give some love to our sponsors Wessex Press and The Baker Street Journal.

Editor's note: this entry has been updated to reflect Donald Pollock's non-association with the BSI.