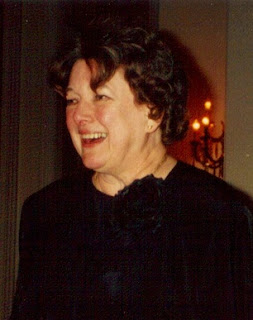 Pamela Bruxner, BSI ("The British Government") died on March 28, 2012 at the age of 77. Pam was a medical secretary at Maidstone Hospital and among her many talents, had a great love and knowledge of music. Her secretarial skills and musical knowledge were used to great advantage with several musical and dramatic societies. She was an Associate member of Glyndebourne, an operatic cultural institution, and hosted their annual picnic for groups of friends. The caveat to attend the picnic was that one had to help prepare an elaborate spread and carry chairs and tables to the gardens.

After the death of her musician husband, Mervyn Bruxner in 1973, Pam joined The Sherlock Holmes Society of London. Among her many contributions to the Society was her highly-acclaimed dramatization of "The Three Students," which was performed at the 1988 expedition to Oxford, with the late Bernard Davies directing and appearing as Holmes. Pam served as Meetings Secretary of the Society from 1989 to 2005, edited or co-edited nine of the Society's handbooks, was made an Honorary Member of the Society in 2003, received the Tony Howlett Award in 2006, and wrote the Foreword to Volume Two of The Best of 'The Sherlock Holmes Journal' (2011).

Pam met Geoffrey Stavert on the 1988 Switzerland pilgrimage and, to the delight of their friends, they became inseparable companions. After Geoffrey's death in 2002, Pam moved to a beautiful village on the Kent/Sussex border, where she immersed herself in local artistic and musical societies. Pam's interests also included Jane Austen, Dorothy L. Sayers, and Margery Allingham, and was a member of their societies.

Pamela Bruxner was invested into The Baker Street Irregulars in 1998 as "The British Government."

You may read her obituary from the Sherlock Holmes Society of London by clicking here.

If you have any special memories of Pam that you would care to share, please leave us a comment.