A Look at Weddings and Marriages in the Sherlock Holmes Stories 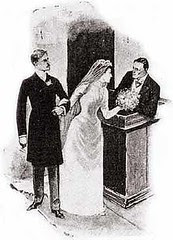 It's wedding fever as William and Kate enter into holy matrimony today at Westminster Abbey. And while the British, for the most part, are yawning their way through this one, there's always some intrigue around a well known couple that ties the knot in a very public way.

While not every wedding in the Sherlock Holmes stories was public, there are a few mentions of weddings and marriages in the Canon that are worth noting here. Let's take a look at some wedding-related items, shall we?

"A Case of Identity" involved the courtship and engagement of Mary Sutherland and Hosmer Angel, leading to the subsequent disappearance of the groom on the morning of the wedding. The relationship didn't have a happy ending, but Holmes managed to use a hunting crop to threaten justice.

Sherlock Holmes himself (under the guise of Escott) became engaged to Charles Augustus Milverton's housemaid in an effort to stop Milverton from blackmailing Lady Eva Blackwell, who was engaged to the Earl of Dovercourt. Their wedding, a fortnight away, was in jeopardy if the stolen documents came to light.

. The two used their authority in the Mormon church to abduct her from her father's house and away from Jefferson Hope. It was a transcontinental trip ending in London that made Sherlock Holmes famous in his first public appearance.

Oh, the things they'll do for...money. Violet Smith's rich uncle passed away in South Africa and two money-seeking colleagues wanted to marry her for the inheritance in "The Solitary Cyclist." They played cards to determine who would be the suitor, and then she was abducted and held at gunpoint through a ceremony in the woods. "But in any case, a forced marriage is no marriage," determined Holmes, and Miss Smith was free to see her fiancé Cyril Morton once again.

In "The Copper Beeches," Jephro Rucastle had good reason to want keep Mr. Fowler away from his daughter Alice. So he found a stand-in and prevented the courtship from continuing. Or so he thought.


The Stoner sisters didn't have much luck when it came to weddings. First, after Julia announced her engagement and pending wedding, she died mysteriously in the night amid the sounds of clanking metal and a whistle, shrieking about "The Speckled Band." Then, two years later, the same scenario presented itself to her sister Helen, who heard the same ominous noises.

Sherlock Holmes himself was hired to stop the wedding of Baron Gruner and Violet DeMerville in "The Illustrious Client." Having been met with "calm aloofness and supreme self-complacence of the woman [he was] trying to save," Holmes had to resort to more devious methods.

In "A Scandal in Bohemia," we come across not one, not two, but three marriages. We first find that Watson has married Mary Morstan, the damsel in distress in The Sign of Four

, as Holmes remarks, "Wedlock suits you." Then we discover that the King of Bohemia is about to be married to Clotilde Lothman von Saxe-Meningen, second daughter of the King of Scandinavia. A threat to this marriage is a certain photograph that Irene Adler has in her possession. It is her marriage to Godfrey Norton that sets things right.

The spoiler "The Lord St. Simon marriage, and its curious termination," opens "The Noble Bachelor." We learn of a down-on-his-luck nobleman who marries the daughter of an American millionaire. Only the marriage is not to be. The young lady disappears, her wedding gown left floating in the Serpentine. If there were one story you read today regarding weddings in the Canon, this should be the one.

And when weddings actually do occur, it's customary to have gifts. Dr. Mortimer received his walking stick (the one he left behind at 221B Baker Street) "From one or two friends on the occasion of my marriage," in The Hound of the Baskervilles

We'd be remiss if we didn't mention the downside of marriage. In the area of divorce, we know that Laura Lyons was trying to get a divorce from her husband so she could marry Stapleton [HOUN]. And also that in "The Devil's Foot," Dr. Leon Sterndale and Brenda Tregennis were in love, but were in a tough situation: "I could not marry her, for I have a wife who has left me for years and yet whom, by the deplorable laws of England, I could not divorce."

Finally, we can think of no better example of a couple at odds with each other than the one that Holmes used in "A Case of Identity."
Watson relates:


"Here is the first heading upon which I come. 'A husband's cruelty to his wife.' There is half a column of print, but I know without reading it that it is all perfectly familiar to me. There is, of course, the other woman, the drink, the push, the blow, the bruise, the sympathetic sister or landlady. The crudest of writers could invent nothing more crude."


"Indeed, your example is an unfortunate one for your argument," said Holmes, taking the paper and glancing his eye down it. "This is the Dundas separation case, and, as it happens, I was engaged in clearing up some small points in connection with it. The husband was a teetotaler, there was no other woman, and the conduct complained of was that he had drifted into the habit of winding up every meal by taking out his false teeth and hurling them at his wife, which, you will allow, is not an action likely to occur to the imagination of the average story-teller. Take a pinch of snuff, Doctor, and acknowledge that I have scored over you in your example."


The man who never in his life
Has washed the dishes with his wife
Or polished up the silver plate -
He still is largely celibate.

Are there other favorite wedding, marriage or engagement connections in the Canon you think we should have covered? Leave us a comment below.